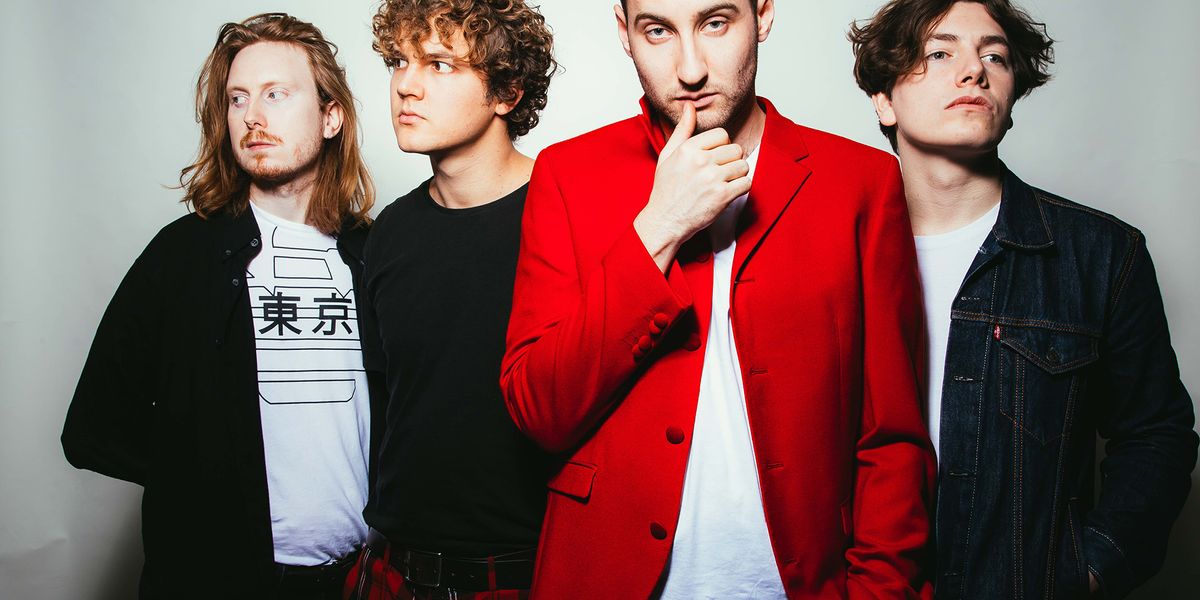 The all-male quartet Sea Girls’ debut album Open Up Your Head is a catchy, very listenable record full of mainstream pop-rock anthems in short supply on the pop charts these days. Think about 2010s one-off hits like Capitol Cities’ “Safe and Sound” or Walk the Moon’s “Shut Up and Dance”. Go back to the early 2000s for the Killers’ first album, or even consider the 1975’s less esoteric material, and that gives a pretty good idea of where Sea Girls are coming from.

Open Up Your Head begins with “Transplant”, a song that finds lead singer-guitarist-songwriter Henry Camamile getting dumped at a noisy club and not quite being able to hear all of his girlfriend’s explanation. Throughout 14 tracks, Camamile goes through denial, bargaining, muses on how excellent she was, tries dating other people, decides that she is the only one out there for him, and finally declares that he’s actually, finally ready to move on. It’s easy to take these songs individually as pretty typical rock song romance tracks, but it seems fair to treat this as a concept album as well.

“Transplant” starts with shimmers of sound, drops them for a steady kick drum beat and piano chords that quickly give way to synth bass and synth chords as Camamile jumps into a low-key chorus after a brief first verse. With the second verse, the guitars come in, and the drums come in full blast, an extended pre-chorus follows the verse, and the second chorus (“Your heart changed / Mine stayed the same”) has chiming guitars and great big backing vocals. It’s a classic pop song buildup executed impeccably over about 90 seconds. It’s followed by a quiet bridge that also steadily increases in volume, pushing right back into the chorus. It ends with a vocal outro, as Camamile repeats, “Whatever happened to your heart / Didn’t happen to mine.” “Transplant” isn’t exactly fresh material musically or lyrically, but Sea Girls perform it with confidence and an excellent sense of dynamics. It’s the kind of song that could conceivably be a huge single for a young band. And then you’d expect that band not to have anything comparable to follow it up with.

But it turns out Sea Girls have loads of hooks, Camamile’s lyrics are very relatable, and their songs are consistently well constructed. “All I Want to Hear You Say” has a big, danceable beat as Camamile begs his ex to come out to one of Sea Girls’ shows, fantasizes about getting back together with her, and promises, “How you doin’? / I want you to know / That I’m doing / Better than I was before.” Then the very 21st century refrain, “I’m on your newsfeed twice a day.” Apparently the breakup was amicable enough that nobody got blocked on social media. “Do You Really Wanna Know?” is full of chiming synths and bright guitar chords and could easily be an 1980s rock song. “Lie to Me” brings out an acoustic guitar for the first time, with a big sing-along refrain. “I’m a baby / When it comes to my thoughts / So you can just lie, lie, lie to me.” Camamile has a streak of self-deprecation going through these songs that keeps him from being an outright hero and resists casting the ex-girlfriend as a villain.

The balance of Open Up Your Head is packed with rock-solid songs, as well as an occasional standout. “Closer” has strong lead guitar work from Rory Young, with a catchy chorus riff standing in for a big vocal refrain and simple but distinctive playing in the verses. “Forever” brings in the chiming guitars and echoey drums that often indicate a U2 pastiche, always a dodgy prospect. But Camamile’s vocals are really strong, and the band’s command of dynamics allows them to pull it off, even though it’s missing a huge, catchy chorus. The very next song, “Weight in Gold”, does have that chorus, however. It’s an ode to spending a night together after making an instant connection with someone. The refrain opens with, “You are worth your weight / Worth your weight in gold” but it goes on for another four lines, and it’s a sing-along from the first time the band play it.

“Violet” is one of the standout tracks. It’s a fast rocker that starts with tension and bursts into a driving, borderline punk energy. The refrain, “V-I-Oh my God, Violet”, is simultaneously dumb and enormously fun. This is one where the band doesn’t overthink it, just playing flat-out from the first chorus onward. The antepenultimate track, the deceptively bright, “Damage Done”, seems to bring the focus back to the initial relationship after the middle of the album meanders a bit. Camamile sings in the verses about meeting her during freshman year of college, but insists in the chorus, “You’re not the inspiration / You’re not the reason for this song / If you want an explanation / The damage is, damage is done.”