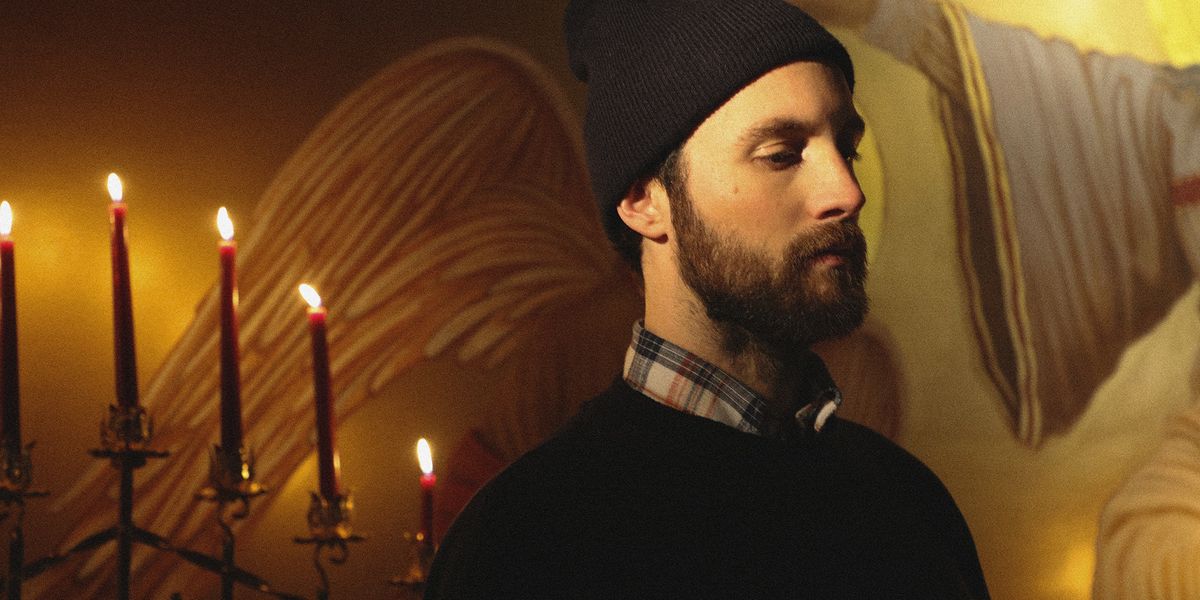 Last year marked an upswing in the life of Ruston Kelly. On the musical front, after his first full-length album Dying Star earned critical acclaim, Kelly spent a good portion of the year on the road to support the record. I managed to catch him twice when he came through New York City, including an opening slot for Patty Griffin and a headlining slot at the Bowery Ballroom, and at Newport Folk Festival. I was among the thrilled fans who eagerly sung along with “Mockingbird” and in the age bracket where I could hear his cover of Wheatus’ “Teenage Dirtbag” and think back to the original’s impact.

The Dying Star tour was slow to fade out, wrapping up in March 2020, just before the pandemic canceled concert-going worldwide, with a headlining gig at Nashville’s Ryman Auditorium, a dream of Kelly’s. He was effusive about the experience, “it was one of those things that you dream about. You write it down on a piece of paper in your tiny little apartment when you first move to town. A big part of that dream was that it was a historic venue in town that all my heroes had done.”

The achievement wasn’t his alone, though. Kelly shared it with his family. His band includes his father Tim “T.K” Kelly on steel guitar and sister Abby Kelly doing backup vocals. His now ex-wife, Kacey Musgraves, joined him for a song as did songwriting partners Joy Williams and Natalie Hemby. “I wanted to go there with my dad. I had this vision of me on stage and him playing steel for a sold-out Ryman show, and it happened. It seemed to cap all this work, all these years of up and down, substance abuse and trying to understand mental health issues and trying to sift through being a better person and feeling knocked down, pulled back up. But also, at the same time, it felt like it was like the beginning of this next chapter in my life.”

Last year was also the year Kelly focused on caring for himself, starting with sobering up in December 2018. While maintaining sobriety and facing his demons, he honed his craft and forged the songs for his new album Shape & Destroy. The record arrives as a more confident statement, a step forward. “I’ve always used songwriting in my artistic tools to understand myself in the world and the things that seem to be tangled or untangled in that way. When I create a piece of work like my first record Dying Star, I understand that area of my life. Once we recorded that, I started working on the next one. I knew it was going to be called Shape & Destroy. I usually get two or three songs that are like, ‘These are going to sit here for a second,’ and then launch me into the next period.

“The funny thing about that is that sometimes songs have this evolutionary quality to them in your life where you think that you write them about a certain situation, and then as they sit there and they grow, you understand them. All of a sudden, they have this revealing quality of an area in your life that you had no idea that you were writing about at the time. Then it feels like that song is complete. These songs were easily done only because they just needed to be said. It’s like the chapter had been lived and we took a completely… I don’t really know what the word would be other than an intuitive approach to this record. When we went in to do it, it wasn’t like, ‘Let’s make this record this.’ It wasn’t like a fucking Steely Dan record where they’re like, ‘it’s math’. It was like, it’s whatever because these songs already exist and we went in there, and everyone did their thing. It just was easy.”

Shape & Destroy contains an emotional narrative, kind of like Josh Ritter’s The Beast in Its Tracks, though the former is about self-preservation and redemption while the latter tackles heartbreak and new love. Kelly confirmed this transcendent arc was done purposefully (though the contrast is mine). “I like to try to do it as much as a from-the-beginning-to-the-end story as possible. It’s a rise and fall or catharsis. Well, it just goes up the whole time and then has this realization at the end with ‘Hallelujah Anyway’. I try to do that thematically. I’ve just always wanted to release a great record where you can listen to it as a story, or you can listen to it in pieces and pick your favorite elements of it in songs, and you just roll with that.”

For Shape & Destroy, Kelly worked alongside producer Jarrad Kritzstein (Kate Nash, Weezer) and with musicians including drummer Eric Slick (Dr. Dog), bassist Eli Beaird, and his father, TK, and his sister, Abby. While more than half of the songs on Dying Star include co-writers (including Kritzstein), Kelly is attributed as the sole-writer on a greater percentage of S&D songs. “When you’re not taking care of yourself, you have a lot of second-guessing. I had all these songs for Dying Star pretty much either halfway or three-fourths done. I didn’t really have the confidence at the time to say, ‘Okay, what’s the rest of this say?’ I was kinda stoned a lot. It always was just woodshedding it, of learning what my process is, and knowing that for this record it was, ‘I have always been a solo writer. Let’s see what I can do with that. The clearer you get, the more you understand what you’re capable of doing… if you can un-blur the vision that you have of your craft and your ability, then things just become natural.”

As a natural result of concentrating on his music, Shape and Destroy has an expanded sonic palette. “Brave” is all acoustic. “Pressure”, with its light percussion, almost has a coffeehouse vibe. Album-closer “Hallelujah Anyways” has the spiritual connection (where better to have recorded it than a former church?). “I’ve always wanted to explore a variety of different spaces and be good at doing those spaces and also have a constant theme of, ‘This is who I am as an artist. You can tell that it’s me on the record, but we can do whatever we want.’ I want to be able to have a career where I can be free to make whatever I’m inspired by happening on record, and it can still be authentic. I think the more you take care of yourself, the more you trust yourself, the more you put stock and belief and faith in the vision that you have and the gifts that you’ve been given and the way that you honor them, the more authentic, I feel, as an artist you become.”

Of the 13 tracks on the record, I can’t fix a favorite down. I have a different one depending on the day. But when asked what his favorite Shape & Destroy track is, Kelly was quick with a response, “From a recording standpoint, I would say “Rubber” is my favorite track. That was when really the magic had hit us. Because we recorded in this old church, and it was like, we’d do these magical takes. Then that professional work ethic would kick in. We’d be like, ‘Of course we need to do more than one take of this song. Let’s do it again’. It just never matched that magical take. So we had this motto, ‘just listen to the church, man. Just listen to it. Don’t overthink this.’ “Rubber” was one of those where it was night time. My dad had never done this certain thing on steel before, and we just went with it. It was like, ‘Whoa, okay. That was fun. We’d like to do it again, but we can’t because we just really created something special to us, and we captured it on record, so, next song’.”

The Crow and Emo

In the poignant music video for “Brave”, contemporary Kelly sings while old family photos and videos (did you know he was an ice-skater?), video game scenes and some shots from the Ryman run alongside split-screen. One icon that was part of his touring set, shown during a performance clip, and is also in his lyrics and in the name of his publishing house, is the crow. Kelly’s connection with the blackbird goes back quite a way and is strong enough that he got two tattoos of it. “Apparently when I was a little kid there was this giant crow that came to the window, that was like my nursery room, and was just pecking and pecking.

“I don’t know. I’ve always felt this connection to the bird and I didn’t know really why. Then I started doing some research and discovered that, especially in native American folklore, the crow, the raven, is the bringer of the light. They’re the ones that have to brave the dark to pull the magic out and bring it into the light. It’s to understand yourself a little bit better from a redemption standpoint. That is something I had already kind of grown into — a desire and understanding for my own life. It’s a very positive animal totem.”

In 2019, Kelly also released a covers EP, Dirt Emo Vol 1. He had recorded not one but two takes of the Wheatus song for the EP. So, when “Teenage Dirtbag” hit the twenty-year milestone this year, Kelly’s name came up in pieces reflecting on the timeless song. The EP, which also includes covers of Taylor Swift’s “All Too Well”, the Carter Family’s “Weeping Willow” and Blink-182’s “Dammit”, promises a follow up and maybe even a festival. Kelly didn’t know what he might include on a new EP yet but had some thoughts on the direction, “there’s a million songs we could do. I still want to do a song from the Used, from Taking Back Sunday, from Motion City Soundtrack.

The idea for Dirt Emo Vol 2 is to get as many collaborators as possible and to make them different, not just have to be from the emo world. The whole idea is to bring this sense of inclusivity and value to the emo scene. Some of the songs melodically are some of the best melodies. They’re like Mother Goose rhymes. They’re so catchy and so good and it feels so good and when you sing them with a different lilt, they hit really hard.”

As for what we could look forward to at a festival, whenever those are allowed again, Kelly expounded a possible lineup, “I would say, you could see on the bill [bands] like Taking Back Sunday and Saves the Day, Phoebe Bridgers and Katie Pruitt, Dawes and My Morning Jacket and shit like that. Dirt Emo fest, dude, you just wait, man. It’s going to be sick.”