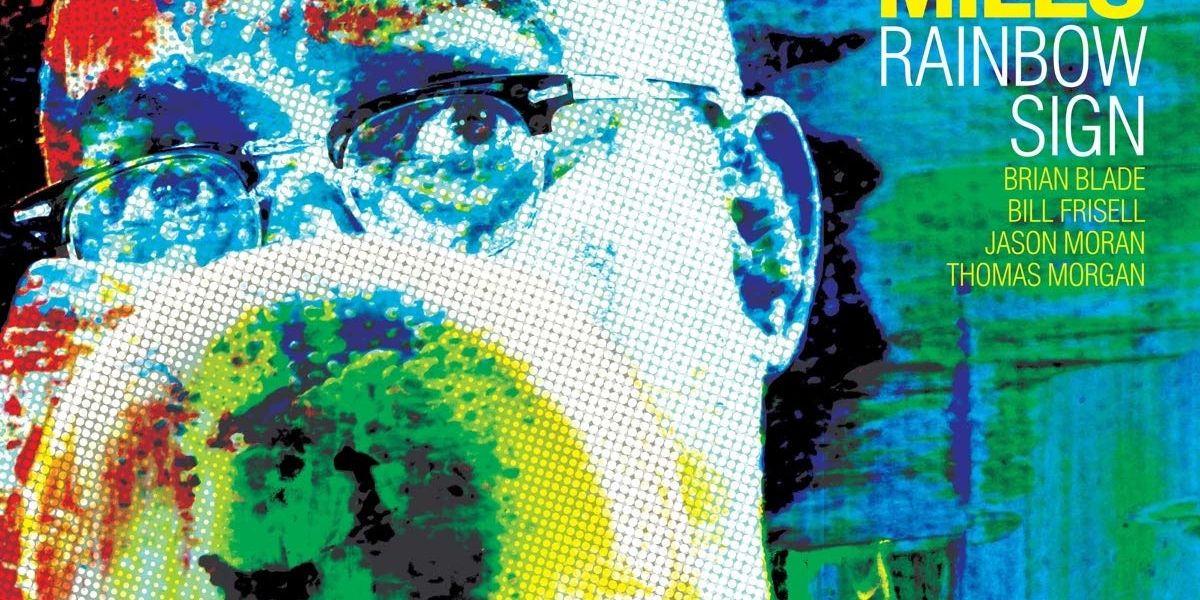 Ron Miles’ last album, 2017’s I Am a Man was elite. It brought together a striking band—his triomates Bill Frisell on guitar and drummer Brian Blade, along with Frisell’s bassist Thomas Morgan and the always-interesting pianist Jason Moran. The Miles originals were billiard balls glancing off of several cushions: Frisell-ish impressionism that would be at home on ECM Records, modern post-bop jazz descended from the vision of artists such as Wayne Shorter, and the new jazz, with its complex structures and shifting patterns tinged with the new century’s notated music.

Through all that, however, the cornetist and composer had concocted a record date rich in feeling and beauty, blues, and melody. It was not only his best recording but one of the best recordings he had ever appeared on, period.

Rainbow Sign brings back the same band and approach, transplanted to Blue Note Records, but now that much more developed and even more emotive. Miles composed the music during the year that his father was dying, and the performances bring to life a mood of reverence, hope, and connection.

Most of the compositions create complex intersections that feel calm, natural, and unmannered. “Average” begins with a gentle pattern for the rhythm section over which Frisell’s guitar plays lazy, lulling patterns. When the leader enters with his cornet, he begins with simple two-note phrases, but the melody develops slightly more linear. Guitar and piano play a counter-melody, leading to a further-developed written answer for cornet. Only then does the tune’s harmony start shifting, setting up a woven section mixing composition and embellishment. The interplay between guitar and horn is feathery and sunlit, all remaining within the swaying rhythm established at the start. Moran is given the most featured solo, after which the band returns with more power than at the beginning. The portrait suggested is one of depth despite a lack of broad, obviously expressive gestures. One wonders if the title is an ironic commentary on Miles’ father.

Not all the music is quite this subtle, but everything is indeed blended in mainly pastel sonorities. The title track, for example, is mostly a mid-tempo swinger, with the ensemble section using a few tricky stop-starts and rhythmic suspensions. Still, most of the track is grounded in Blade’s irresistible four-four ride and Morgan walking a bass line. The central part of the melody is a sunny and catchy lick that flares up into the sky. Once the improvising begins, each player cuts loose with intersecting commentary that magically falls back into a written figure when the time comes. On this track, Miles gets a lead solo that allows him to growl and smear just a little bit, followed by a Moran piano solo that takes the harmony slightly more “out”. It is not cautious music, but the emphasis is on exceptional tonal togetherness.

Gnarlier new jazz gets this gentle treatment on, of course, “Custodian of the New”. The angular theme for unison cornet and guitar toggles over a rhythm feel of irregular pattern in eighth notes, all kept in line by Blade’s casually dazzling pattern. The oddly-timed hits come in jagged surprise, but Miles solos over it with ease. Before long, however, the rhythm section gets to work it out over a straight four-four funk groove for a while, with a new and more heartfelt theme taking over. The sections of rock backbeat alternate with this anthemic portion (in a not-quite even time), so the tune never entirely straightens out, but it carefully modulates its duty to fascinate you. As with so much of the new jazz, Miles doesn’t feel like he has to return to the opening theme as in the old days—this is a journey he is taking you on.

A couple of other swingers will remind you how connected all these players are to the tradition. “Binder” is a bopping unison line for Frisell and Miles that has more than a bit of Charlie Parker or Bud Powell in its DNA, with concise solos that are not short on conversation. “This Old Man” also dares to swing, with Miles using a Harmon mute on his horn as Frisell stays an octave below him. This one has a loping swing that starts and stops, but the last two minutes become something else—tempo melting away and the bandmates slipping into free atmosphere.

“Like Those Who Dream” is structured in the other direction, beginning the whole collection with gestural playing free or tempo or harmonic rules, then easing into an odd-tempo bass line for Thomas and Moran’s left hand, together. Even though there’s no backbeat or insistent groove, your foot gets to tapping, with Moran’s right hand playing occasional eighth-note triplets as if he were a postmodern Fats Domino. This may be the track where Moran makes the most considerable contribution, getting some big chords that juice the music with a dose of gospel fire and then taking a solo that grows very gradually out of the guitar solo to become expressive, florid, and stately as necessary.

But, mostly, no one musician ever takes over a track. This is a supremely cooperative recording. “The Rumor” is the performance that lets Frisell Be Frisell most clearly, giving him the main melody on a sumptuous Americana theme at the start, the cornet playing only a supporting role. His best solo is probably the one right before Moran’s on “Like Those Who Dream”, where we hear him again as the fine blues player that he can be.

However, for the most part, each of the voices on Rainbow Sign is asked to play a larger role in the collective conversation than anything else. A close listening to “Queen of the South”, for example, reveals no real “solos” but nearly continual give-and-take that involves improvisation around, within, and a part of the composition. To a greater extent than on I Am a Man, this sounds like a fully integrated band, a group that sublimates for the greater good, even if that requires each musician to turn down a bit. Or a lot.

The laconic feeling throughout Rainbow Sign serves well both its cutting-edge moments and its throwback moments. Every musician on this date is at the peak of his creative power, but Miles clearly has asked them to fit not just the tunes but also a mood. If the composition is lurching and tricky, this mood makes it feel natural and easy nevertheless. If the form is more traditional, the mood imbues the performance with a sensual grace.

Perhaps it goes without saying that Ron Miles is doing something extraordinary on these two recent recordings—he is channeling the voices of five distinctive players into a single new voice of this own. There is just so little shouting going on here that, well, I want to shout: don’t sleep on this magical, flowing music, even if the music purposely courts a dreamy mood. Rainbow Sign is quietly fantastic.