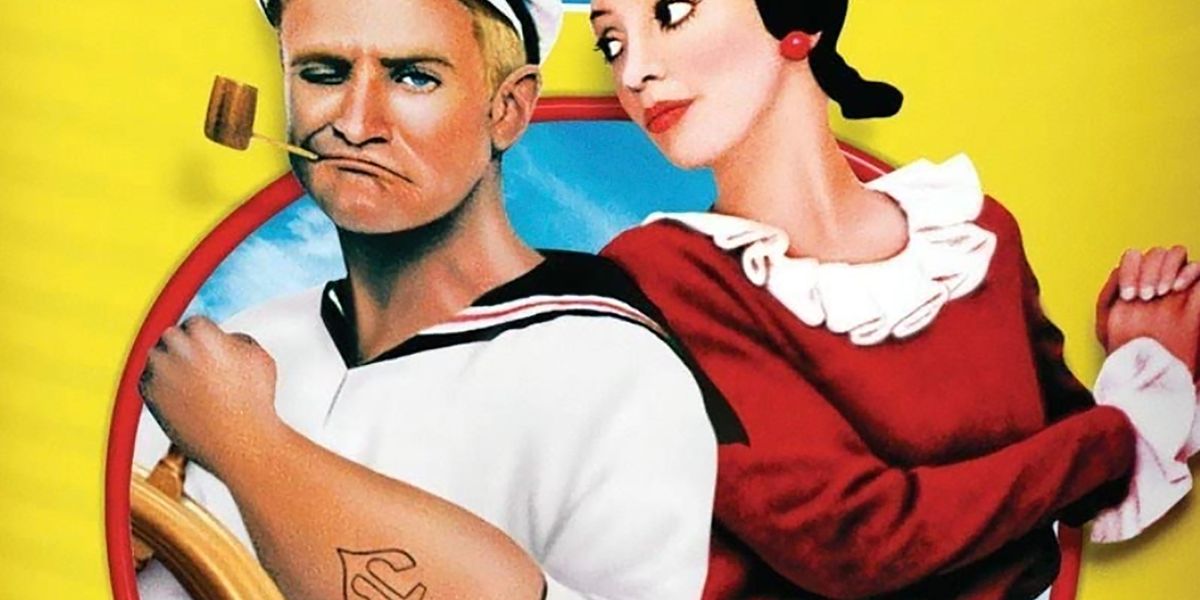 New to the Paramount line is one of the few Robert Altman films that could be called delightful, although lots of people, as the saying goes, just don’t get it. Unfairly maligned as a bomb and a disaster, Popeye (1980) actually made a clear profit, despite going over budget. The film has enjoyed consistent popularity on home video, with this 40th Anniversary Blu-ray signaling that. Here’s the enthralling story of the flop that wasn’t.

What happened was this. Hollywood studios were dazzled by the box office of Superman: The Movie (1978, Richard Donner). They believed a man could fly, and they believed there was gold in them thar special effects spectacles. That film came along one year after George Lucas’ “Star Wars” had set a new standard for blockbusters, and we were officially in a whole new ball game. So Paramount and Disney were receptive to producer Robert Evans’ idea for a somewhat pricey co-production based on the classic Popeye character. After one or two directors passed it up, Altman expressed enthusiasm.

Altman and his screenwriter Jules Feiffer, a comics historian and comics artist himself, were old school. They remembered their childhood delight with the original Sunday comics by E.C. Segar, when it was called Thimble Theater and had a dizzying cast of wacky characters. Back in the day, the strip’s hero was a guy called Castor Oyl, the dumpy little brother to lanky Olive Oyl, and her boyfriend was a guy named Ham Gravy. At a certain point, Popeye the sailor was introduced and quickly took over the strip, like Fonzie on Happy Days. Altman and Feiffer loved the original oddball community and were eager to recreate it in live-action.

That’s already a potential problem for an expensive production, in part because only elderly citizens remembered that incarnation of Popeye. More remembered the cartoons, which had several phases in themselves, and Altman and Feiffer were only interested in acknowledging the earliest black and white cartoons created by Max and Dave Fleischer, which fetishized the idea of a spinach-eating sailor acquiring super-strength to rescue an Olive Oyl perpetually kidnapped by the hulking Bluto.

The miracle is that the film pulls it off beautifully, and we’ll rhapsodize in a moment. As Altman theorizes in an archival interview among the extras, the downside is that the resulting film appealed to two groups at opposite ends of the demographic: young children and older people. Everyone in the middle, including the increasingly crucial teen and early adult audience, was baffled by the sheer peculiarity of it all.

Altman thinks that eventually, grandparents were plunking their grandkids in front of the TV to watch a film they could both enjoy, which would mean a generation or two has now grown up with nostalgic affection for PopEye. It’s one of two big-budget comic strip musicals of the ’80s, the other being John Huston’s Annie (1982), that were initially written off as disappointments but that two generations of kids have grown up watching.

From the opening shot of the camera pulling back and gliding around a stormy sky, it’s got Altman’s busy, mobile signature all over it. Here are the crowded, bustling shots of characters talking at once and letting the sound mix sort it out later, like God separating the guilty and innocent after a scene of carnage. Here are the restless editing rhythms, the drifting longshots, the sudden closeups, and back again. It’s unmistakable, a triumph of “auteurism”.

One of Popeye’s amazements is that Altman’s style so perfectly captures and mirrors Segar’s rowdy, rambunctious comic and its huge cast and that it so blithely mimics cartoon actions and sound effects, like somebody being pounded into accordion shape or having their head turn into a jittering punching bag. We’re reminded of the connection between cartoon style and Altman’s first and biggest hit, M*A*S*H (1970), not to mention tongue-in-cheek audacities like Brewster McCloud (1970) or A Wedding (1978).

Some people don’t care for the film’s winsome, flimsy, daffy songs, but there’s no accounting for taste or lack thereof. Paul Thomas Anderson was so charmed by Duvall’s rendition of “He Needs Me” that he used it as the theme for Punch-Drunk Love (2002), and that tells you how this film appeals to the whimsical and idiosyncratic. Where else will you find a song like “Everything Is Food”?

The town of Sweethaven is an impressive ramshackle construction built on the island of Malta and designed by Wolf Kroeger, with Altman’s son Stephen Altman handling the props. This dazzling set and location, shot by Giuseppe Rotunno in sunny splendor, are responsible for most of the budget overrides along with weather issues that delayed filming. They’re also responsible for much uniqueness. As ramshackle as the set seems, it stands to this day as a tourist attraction.

The entire film is ramshackle, and much of the script seems rambling and ad hoc until the last reel replicates a standard cartoon scenario with a fight and a giant octopus. Contemporary reviews reflected this mixed-bag-ness, but many of the film’s virtues, including its tender innocence mixed with political satire and slapstick nonsense, were admitted even by reviewers exasperated with the picture.

I could wish the story were tighter or funnier or smarter, but I couldn’t wish it more eccentric. It’s off-kilter magic will charm viewers open to its humor and style. Altman’s Popeye may always be more of a cult item than a mainstreamer, but it will continue to attract fans.