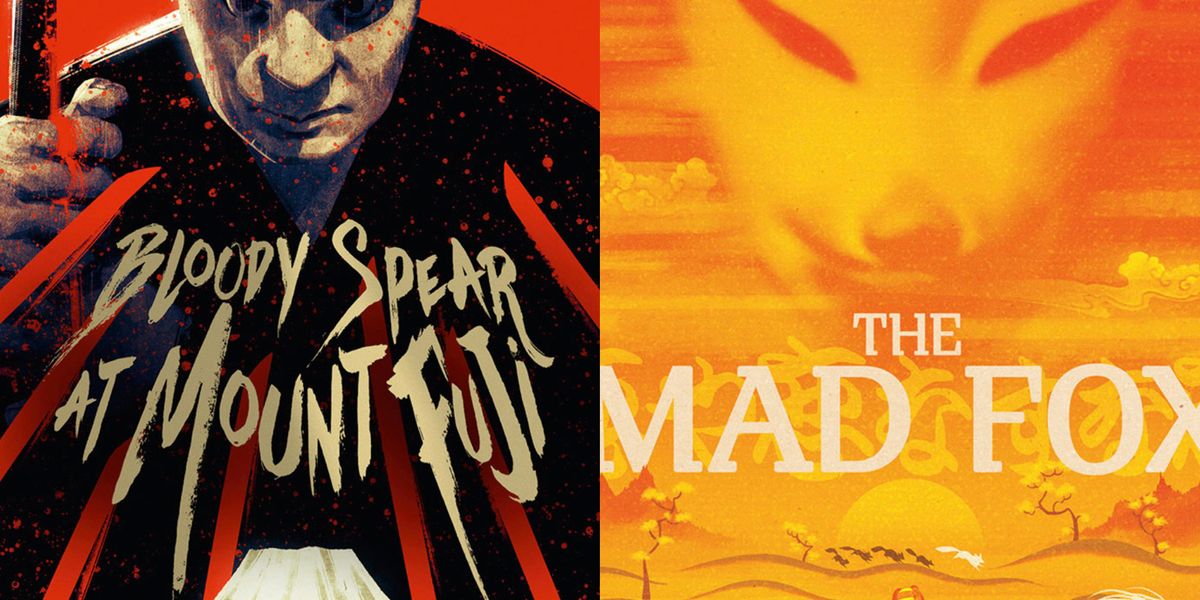 Director Tomu Uchida is among many world-class filmmakers under-served on DVD and Blu-ray, at least outside his native Japan, where he’s long been recognized as a master. Arrow Academy has made inroads toward correcting this lamentable situation with two releases, Bloody Spear at Mount Fuji (Chiyari Fuji, 1955) and The Mad Fox (Koi Ya Koi Nasuna Koi, 1962). These films vary so wildly in style and theme that anyone who watches them in tandem might be confounded to consider them the work of the same director, and this capacity for diversity may be one reason Uchida isn’t better known.

From a name like that, audiences may be forgiven for expecting a samurai picture, that subgenre of jidaigeki (period films) known as chambara (sword fight movies). We’d even expect a particularly violent one. The title doesn’t exactly deceive, but you must wait until the last ten minutes before that promise is fulfilled, for the movie is really playing a different game.

This is a road movie, and mostly a gentle, even comic one that interweaves the stories of a diverse group of travelers on the road to Edo, now called Tokyo. One of the travelers is indeed a samurai (Teruo Shimada), though a rather dissolute one who’s been ordered by his mother to stay away from drinking sake because he gets violently drunk. Otherwise he’s a kindly and considerate master and one who repeatedly questions the status quo of class and power, and the film illustrates that this is rather unusual. His discontent may be the source of his alcoholism.

He’s accompanied by two servants or keepers or handlers. Genta (Kato Daisuke) is the comical one, a little dumb, a little pudgy, the butt of jokes. The film’s hero is the samurai’s spear-carrier, called by his job Genpachi (spear-carrier), played by venerable jidaigeki star Chiezo Kataoka. Genpachi is idolized by an orphan boy who attaches himself to him. He’s also observed by a kindly and thoughtful woman (Chizuru Kitagawa) who entertains the public by playing shamisen with her little daugher. The child actors, boy Motoharu Ueki and girl Chie Ueki, are Kataoka’s real-life children, and they have a warm presence together.

Photo by Егор Камелев on Unsplash

As we’ve implied, several other characters have their own little dramas that gather to a head near the end of the picture. In a bonus interview, Yasuka Uchida, the director’s son, suggests a connection in the final shot between this film and Edmund Goulding’s all-star Hollywood production Grand Hotel (1932), and really the whole film suggests a connection with its balance of comedy and drama among an interwoven assembly of characters who stay at the same inns on their journey.

The audio commentary by British historian Jasper Sharp offers invaluable historical and cultural insight, for example explaining what our hero is carrying in the final scene, and informing us that Mount Fuji had been forbidden to show in films (as a nationalist symbol) during the US occupation that had recently ended. He draws parallels with the films of Hiroshi Shimizu, who was originally set to direct this film and instead served as an advisor. Yasujiro Ozu is among several prominent assistants who rallied around their pre-war colleague for Uchida’s return to directing after a gap of many years in Manchuria.

The restless Uchida had gone to this Japanese-occupied territory during the war, and chose to stay when the war ended and the communists took over. Although many of his pre-war films had leftist leanings, and his social epic Earth (Tsuchi, 1940) had to be made without the knowledge or permission of his studio until he sprang it on them as a fait accompli and it became a great success, he’d also been a sincere militarist.

His Manchurian stay altered his views, and his postwar films are more consistently critical and cynical toward power structures and more aligned with “the little people” and those who struggle (often hopelessly) to improve their position. As his son recalls, studios were afraid he’d been brainwashed by communists, so it was by an act of faith and friendship that his old colleagues joined to get him the job on Bloody Spear at Mount Fuji, whose success let him continue making films for the domestic market at Toei Studios.

The rest of his career mixed period films and contemporary stories, and his accomplishments included Japan’s first widescreen feature. Almost none of his pre-war films survive, as they’re blown to oblivion along with most of Japan’s pre-war cinema. Sharp’s discussion of some of his postwar successes and the clips we see in the extras discussing Uchida’s career make us salivate for more. Viewers wishing to know about these several elusive restorations can check here for Sharp’s brief reviews.

For now, the only other Uchida film we’ve got on Blu-ray is The Mad Fox, a glorious period folktale. The terms “eye-popping” and “jaw-dropping” are necessarily overused when discussing the pictorial qualities of much Japanese cinema, but pity the poor reviewer who must come up with new words to convey the retinal-expanding color schemes, disorienting compositions, and delirious artifice of such widescreen dazzlers as this.

Viewers acquainted with the elegant ghost tales of Masaki Kobayashi’s Kwaidan (1965) or the visual effrontery of Kon Ichikawa’s An Actor’s Revenge (Yukinojo Henge, 1963) or Seijun Suzuki’s Tokyo Drifter (Tokyo Nagaremono, 1966) may be somewhat prepared. I can imagine that seeing this on an overwhelming large screen may trigger the phenomenon called Stendhal syndrome and leave viewers wandering in a daze, trying to remember their own names. Smelling salts might not be out of order.

The film is based on a classic tale told many times, most notably as a production of the bunraku tradition, a puppet theatre in which the audience can see the shrouded puppeteers on the stage. This film continually references stage artifice and other flagrantly anti-real conventions, such as the use of fox masks, rotating stages, scenic drop-cloths, an opening illustrated scroll, an offscreen singer, and color schemes of blinding golden-yellow saturation. Animation is even employed judiciously.

A discussion of the complicated story seems beside the point, since Uchida cares so little for it that he leaves all conventional plotlines unresolved by the enigmatic ending, which leaves us with the same moral as Barry Manilow’s “Copacabana”. “Don’t fall in love!” bewails the singer. Still, we’ll take a stab at the basic set-up.

Way back in the near-mythical Heian period (794 to 1185 A.D.), a “white rainbow” over Mount Fuji foreshadows disaster. The court astrologer (Junya Usami) must get a message to the Emperor explaining something of great import, whatever it is, when he’s crossed by his spidery wife (Sumiko Hidaka), who wants to hook up with his lesser apprentice (Shinji Amano) while shutting out preferred apprentice Yasuna (Hashizo Okawa) and Yasuna’s love, the astrologer’s adopted daughter Sakaki (Michiko Saga).

Although Sakaki isn’t long for this plot, Saga plays two more roles: Sakaki’s twin sister and the daughter of magical folkloric fox-creatures (“kitsune”). Fox-daughter adopts the form of Sakaki, or rather her twin, in order to nurse Yasuna, who in technical terms has gone loony tunes. The McGuffin is the Golden Crow, the secret ancient scroll that knows all, tells all, and which pops up in various hands over the course of the finally unresolved story.

The backstabbing politics of the court scenes are especially left hanging, a sign that the romantic trauma and its formal presentations are what matter to Uchida in this sometimes avant-garde (yet also highly traditional) production. If a film like this could come out in 1962, it’s no wonder that Suzuki felt increasingly inspired to drop his narrative stitches in favor of radical formal freedom. Sharp makes the clear connection to Suzuki’s wild Princess Raccoon (Operetta tanuki goten, 2005), and there’s another to be made with Akira Kurosawa’s magisterial Dreams (Yume, 1990), especially the first story in that wondrous anthology.

We’ve avoided much plot detail so that these films, obscure to Western audiences before this century, can unroll with their surprising tonal and narrative shifts intact. Let us say that the events in both films build to majestic final reels that do a fair job of playing on the viewer’s emotions, and that, despite their enormous differences, each film will likely leave those viewers wanting to see more of Uchida’s work.