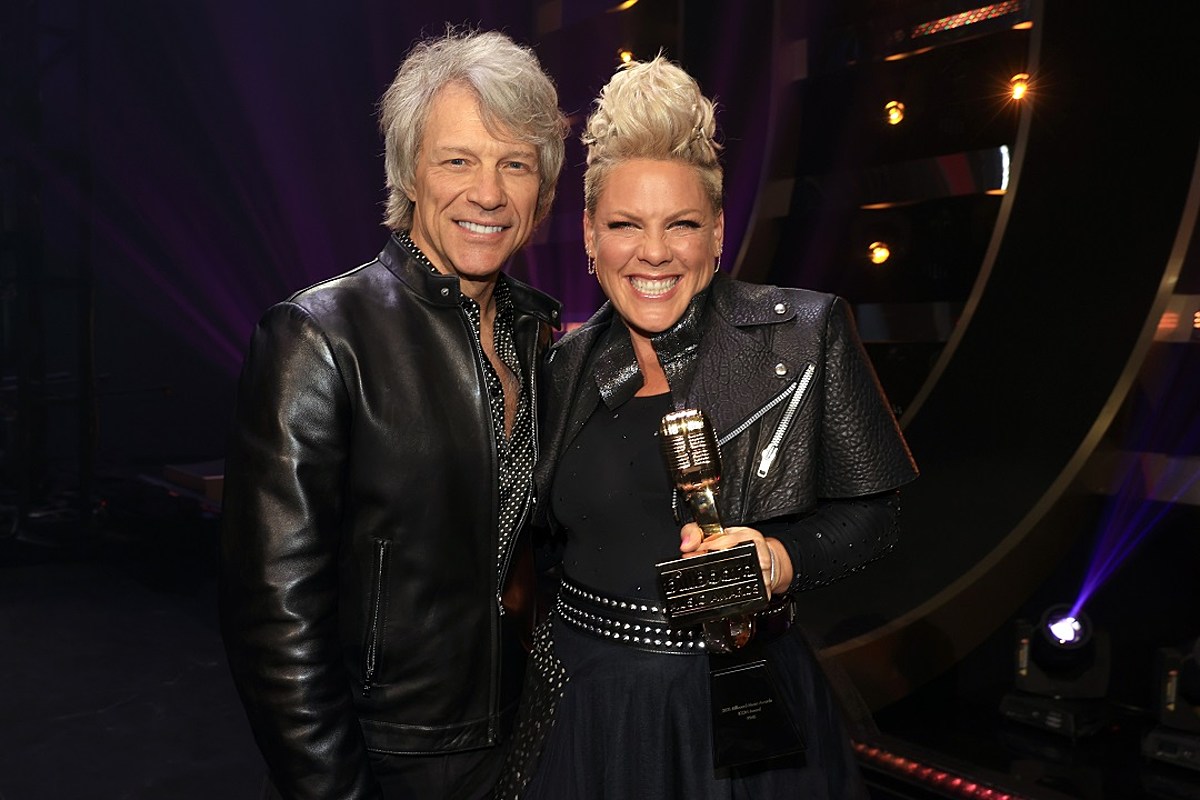 Pink may be one of music’s biggest icons (she’s got the trophy to prove it now!) but that doesn’t mean she’s immune from pining after her childhood crush like us normies do.

The 41-year-old pop superstar received one of the highest honors of the night at the 2021 Billboard Music Awards, becoming the 10th artist ever to take home the coveted Icon Award.

She accepted the award from another music icon, Jon Bon Jovi — and in the process, she revealed that she had a massive crush on the rock legend when she was younger.

“I did not come out my room for a week when you married Dorothea,” Pink revealed in her heartfelt and comical acceptance speech. “I was eight. I ripped your poster off my wall. I replaced you with Sebastian Bach. I’m very glad that you found lasting love, Jon. But you broke my heart. I take this as an apology. I accept!”

Pink also thanked her family, team and fans in the sweet speech. The “What About Us” diva ended with a heartfelt message: “Dream big because what if it comes true?”

Before accepting the award, Pink graced the stage with a predictably jaw-dropping performance. She opened her set by pulling off acrobatic feats alongside her daughter Willow Sage Hart. The duo performed their soulful duet “Cover Me in Sunshine.”

Afterwards, she treated the crowd to a medley of bops that highlighted hits from Pink’s decades-long career. Notable songs included “So What!,” “Who Knew” and “Just Give Me a Reason,” to name a few.

Pink opened up about being honored with the Icon Award in a statement shared with Billboard ahead of the ceremony.

“As a little girl, I always dreamed about being a singer and sharing my love of music with the world,” she enthused. “Years later, to receive the Billboard Music Awards Icon Award is hard to fathom! I feel so honored to join the ranks of music idols.”

“It’s a true ‘pinch me’ moment and I feel humbled and blessed,” she added.

The historic win caps off an action-packed weekend for the hit-maker. On Friday (May 21), she released an Amazon-exclusive documentary called All I Know So Far. The project was paired with an album featuring live versions of some of her biggest hits.

Artists strutted their stuff on the 2021 BBMAs red carpet at Los Angeles’ Microsoft Theater Sunday evening (May 23).
This year’s BBMAs host Nick Jonas wore an unusual two-hued green suit that left fans divided, though he and wife Priyanka Chopra looked unarguably glamorous posing together. But Jonas wasn’t the only star who wore a green suit, as Lena Waithe also turned up in a minty suit.
Meanwhile, Doja Cat’s eye-popping black and white striped two-piece reminded fans of Beetlejuice.
Pink was also a favorite color among the celebrities on the red carpet this year, with musical acts such as Alicia Keys, Saweetie and — duh — 2021 Icon Award recipient Pink rocking rosy-hued fashion and looking pretty in pi… well, you know… in the process.
See all the 2021 BBMAs fashion looks we couldn’t look away from — for better or worse — below!