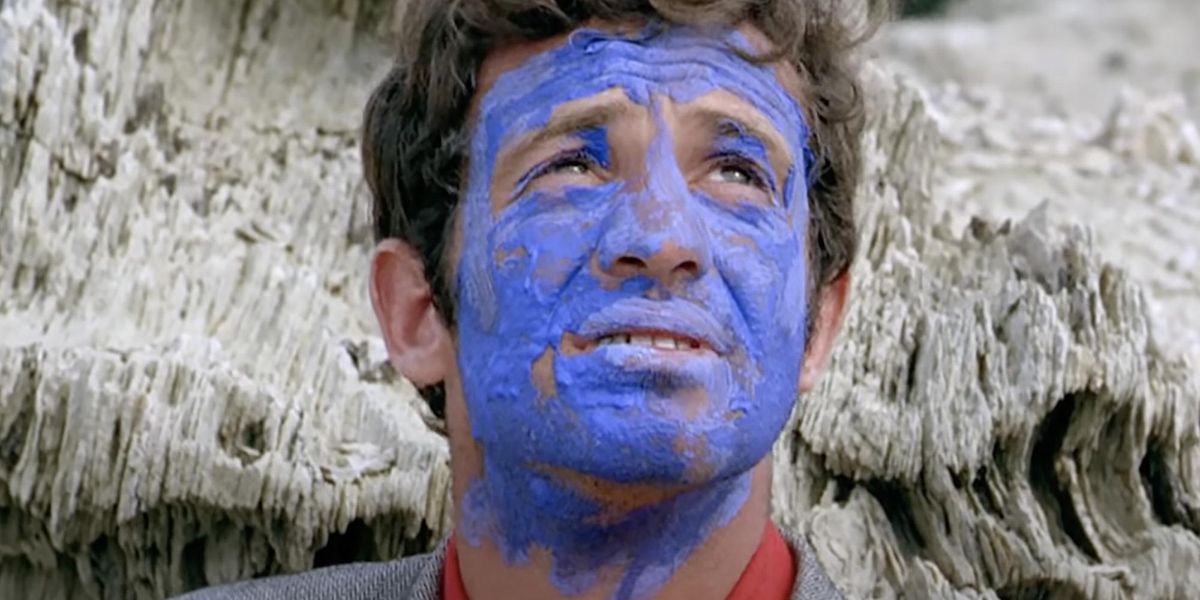 “A man alone always talks too much.” — Ferdinand Griffon

Pierrot le fou (1965) was the tenth 10th feature film in five years from French enfant terrible Jean Luc-Godard, working at a blinding rate mostly unseen in contemporary cinema. Adapted from Obsession, an American crime novel by Lionel White, the film follows Ferdinand Griffon during the melancholy last days of his life, when he decides to abandon his family and bourgeois lifestyle to run away with ex-lover Marianne Renoir. Ferdinand and Marianne are respectively played by frequent Godard collaborator, Jean-Paul Belmondo (who also starred alongside Jean Seberg in 1960’s Breathless), and Anna Karina, whose marriage to Godard fell apart during filming, a fact that does not go unreferenced in the film.

There is no better way to spend the last days of one’s life than in Godard’s universe, a kaleidoscopic journey filled with cars, guns, cash, and books. Of course, before slipping down a pop art rabbit hole, we find Ferdinand in a bathtub, reading about Spanish painter Diego Velázquez to his young daughter. In an opening scene that speaks to Ferdinand and Godard’s respective milieus, the former reads, “Past the age of 50, Velázquez stopped painting definite things. He hovered around objects with the air, with twilight, catching in his shadows and airy backgrounds the palpitations of color…” The excerpt, from The History of Art by Élie Faure, speaks of the actions undertaken by Ferdinand and Godard, two men who encapsulate their era, one of deepening strife and upheaval, while actively trying to escape it via the abstract and the poetic.

Where Velázquez pivoted towards the “air” and “twilight” later in life, Ferdinand and Godard, two men obsessed with and bored by modernity, do it in their 30s. Though the film is filled with cars, guns, cash, and books, Godard is more interested in what exists between these “definite things”, namely the thoughts inhabiting empty space.

Ferdinand’s break from the mundane happens at a party his wife forces him to attend. Because he has been recently fired from an advertising job in television, she wants him to attend so her father can introduce him to an oil company’s president. Once there, in a room Godard draped in bloodred, the attendees surround the smoking Ferdinand, speaking as the embodiment of advertisements. Talk of luxury vehicles (“…safe, fast, and pleasant to drive…”) is responded to with a quip about deodorant (“…it’s so fresh!”) as the red room comes to symbolize the violence inherent to the bourgeois lifestyle. Two other rooms find the rich draped in deep blue and a neutral yellow, conveying the sadness and sterility which punctuate these people’s lives. Having his actors also serve as advertisements allows for a varied analysis.

On the one hand, he is prophetically commenting on the ever-increasing commercial value of cinema, especially in Western countries, a decade before the rise of the “summer blockbuster”, cinema’s ultimate acquiescence to capitalism. Furthermore, the ubiquity of advertisements and the characters’ knowing way of reciting them leads to questions regarding the form and function of cinema, which he continued to grapple with for decades. As is usual with Godard, he engages in détournement with the capitalistic, re-presenting it in all its naked ugliness. He uses this ugliness to propel the plot.

In his attempt to escape the trappings of capital and commodity, Ferdinand finds some momentary respite (and natural lighting), funnily enough, via an encounter with a filmmaker, the American Samuel Fuller (playing a non-French speaking version of himself). Fuller is in Paris to work on a film adaptation of Baudelaire’s The Flowers of Evil (Les Fleurs du mal). Fuller and Ferdinand are two strangers who find enjoyment in communicating with one other (with the help of a translator who happens to be in the room). When Ferdinand asks Fuller what cinema is, he responds, “A film is like a battleground. It’s love, hate, action, violence, and death. In one word: emotion.” This is all Ferdinand needs to know to get the plot moving, for shortly thereafter, he leaves the party alone, returning home to find a sleeping Marianne whom he subsequently runs away with.

The rest of the film follows Fuller’s description, as the loosened emotions of Ferdinand and Marianne lead them on a cross-country romp, rife with meditations on literature, Godard’s oeuvre, and the Vietnam War. Ferdinand’s renewed affair with the mysterious Marianne awakens his inner artist, as he begins to read and write at every available moment. However, Marianna abandons Ferdinand on the eve of what he thinks will be a grand artistic achievement, a betrayal mirroring Godard and Karina’s real-life divorce, leading to an explosive ending.

With Pierrot le fou, more so than any of his previous nine films, Godard was hinting at what was to come, namely his self-declared “end” of cinema and the end of him as the singular author of films. In the few years after Pierrot le fou, Godard would prophesize the global upheavals of 1968 (see: 1967’s Weekend) and form the Dziga Vertov Group, a collective of filmmakers who dedicated themselves to polemical works well into the ’70s (named after the famed Soviet filmmaker/theorist). Though Ferdinand does not live long enough to become fully entrenched in the mid-to-late ’60s politics, Godard both mirrored and dictated these trends.

As film theorist Jean Collet noted in his 1963 book Jean-Luc Godard: An Investigation into His Films and Philosophy, signaled a “second period in Godard’s work”, one in which, “each film becomes a sort of operational object, a catalytic mock-up designed to be plunged into, and to react with, a given historical situation.” Whereas early success for Godard had been earned via his making of genre films, such as with 1960’s noir Breathless and 1965’s science-fiction dystopia Alphaville, Godard had come to realize he could no longer rely on genre. He could only reply upon himself and his ever-evolving beliefs concerning the world around him.

It has been just over four years since my first viewing of Pierrot le fou, a moment in time highlighted by Donald Trump’s ascendancy to the US presidency. My second viewing, spurred by the Criterion Collection’s re-release of the film, comes at the end of this presidency, a time highlighted by an uncontrollable pandemic and a carnivalesque coup some believe is a prologue of what is to come. Within that, I am oddly comforted by what Faure noted, and Ferdinand tells us, about Velázquez’s world. It was one of “sadness”, inhabited by “a degenerate king, sickly infants, idiots”, and, “a handful of freaks dressed up as princes whose function it was to laugh at themselves and to amuse a cast that lived outside the law in the meshes of etiquette…”

Velázquez painted through turmoil, while Ferdinand and Godard made poems, danced, and sung in the dark times. If Pierrot le fou is to leave us with anything, let it be a command to sing, dance, and write poetry throughout our own dark times.

Collet, Jean. Jean-Luc Godard: An Investigation into His Films and Philosophy. 1963.