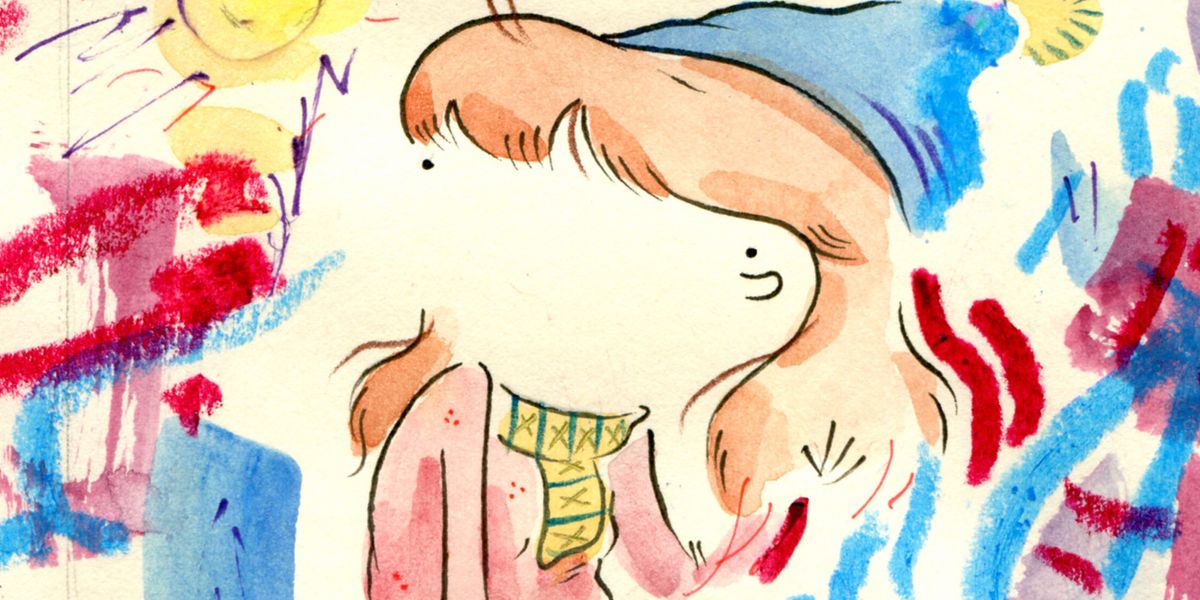 I Know You Rider, Leslie Stein’s third graphic memoir, opens on an abortion clinic waiting room. The story then chronicles a year in her life, told from the moments just before she becomes unexpectedly pregnant, through her decision to have an abortion, and the months that follow.

The story doesn’t follow chronologically but rather jumps from the past to the present and back. Regardless of the time, there are specific themes that crop up over and over, such as her love of nature and music. Stein takes solace in both at various points in the story, and they speak to grounding elements in her life. Her interactions with her mother, friends, and strangers all mark the various approaches she takes in analyzing her decision and when to disclose it.

Stein’s watercolor drawings and penciled lettering are especially effective in conveying what can often come across as ambivalence but is really a measured approach. There’s no big breakdown in the story, and there’s no major a-ha! moment of realization. Instead, Stein grapples with her decision to have an abortion in smaller, more understated ways. The conversations she has about actively deciding to have children, often without revealing her pregnancy or abortion, speak to the thought and consideration she’s put into her own choice without overtly spelling it out.

(Courtesy of Drawn and Quarterly)

The man in the equation is nameless and faceless. He’s someone she’s been friendly with in the past, but he’s not a close friend or boyfriend. His reaction is portrayed as matter of fact and nonnegotiable. He tells her the decision to have an abortion or keep the baby is hers alone, and when she proposes the idea that they’re compatible and might consider going out, he responds that he doesn’t believe in relationships. It’s quickly made clear that he won’t be any help, regardless of her decision, or even his offer to accompany her to her abortion.

Much of what makes I Know You Rider work so well is captured in the fleeting or seemingly unimportant moments of her life. One of those scenes takes place during a visit she and her mom take to see her childhood best friend, who’s just had twins. As her friend gives one of the babies a bath, Stein sits on the toilet watching. She listens to her talk about her struggles with going back to work, missing the twins, and being exhausted all the time. Her friend apologizes for not being as good a friend, as she points out that Stein has traveled for her wedding, baby shower, and now to see the twins, but she’s never been to one of Stein’s book talks or gigs when she was in a band. It’s a quick couple of pages, but it highlights the drastic differences in their lives.

There’s a sequence that comes near the end of the story that recounts the direct aftermath of her abortion. She’s asked to sign paperwork, given follow-up information, and offered a sonogram image, which she accepts. As she tries to find some semblance of normalcy once she’s home, she eventually posts on social media the sonogram. After initially getting congratulations responses, she’s horrified and writes back, “That’s not what this is,” pours herself another drink, and goes to sleep. As supportive messages await when she wakes up, she deletes the post and acknowledges to herself, “Too soon.” The scene offers insight into the conflicting feelings and emotional upheaval she’s been dealing with this whole time.

She acknowledges the many complex feelings she struggled with throughout her pregnancy and in the nine months following her abortion. Those nine months are marked by thoughts of where she’d be if she’d decided to continue her pregnancy. In playing out those what-ifs, she promises herself that she wouldn’t shy away from the emotions they bring up. Through it all, she continues to live her life—sharing that she had an abortion with some close friends and, surprisingly, with some strangers.

I Know You Rider is the story of an abortion, but more than that it’s a moment in time in Stein’s life. Though clearly a defining chapter in her life, Stein makes a point to repeatedly emphasize the other things in her life that give it meaning. It’s those details that make the book more than what could’ve been a heavy slog. Instead, I Know You Rider is an honest story about a subject that rarely gets as light a touch as this, and without sacrificing the emotions she experiences in the aftermath.

(Courtesy of Drawn and Quarterly)