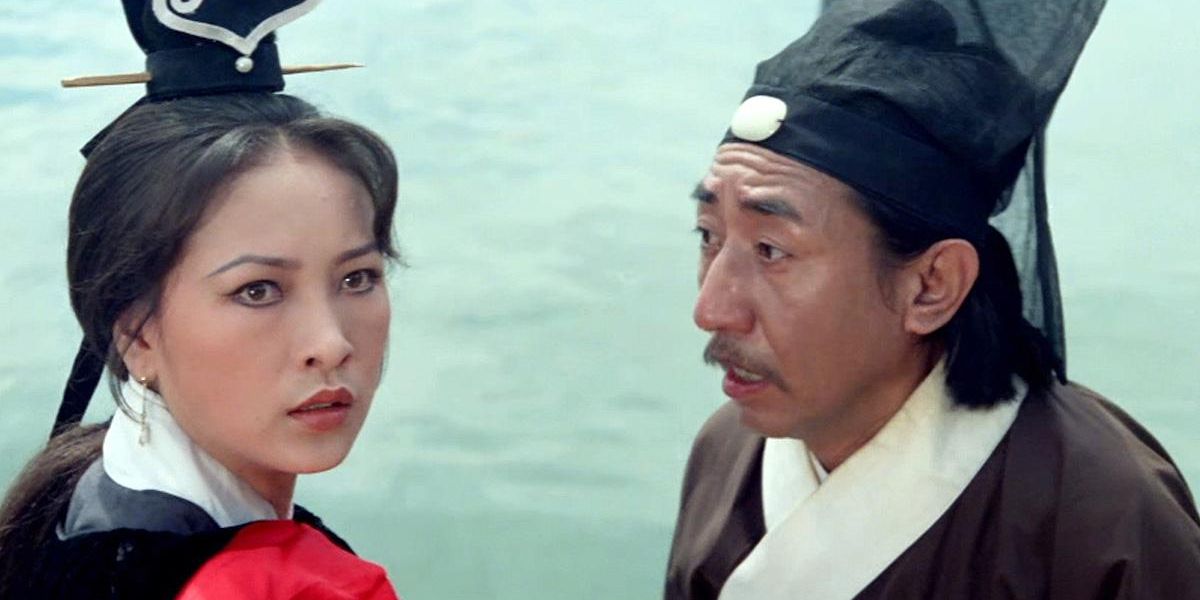 In 1979, King Hu made two epics at once and in the same locations in South Korea. One was the three-hour Legend of the Mountain (Shan-chung ch’uan-ch’i), which PopMatters reviewed here in its Kino Lorber release. Film Movement now graces us with the Taiwan Film Institute’s 2018 restoration of the companion film, Raining in the Mountain (Kong shan ling yu), and it’s as ravishing and welcome as the other King Hu titles restored in the last few years.

While Legend of the Mountain is a ghost story, Raining in the Mountain is deemed a “realistic” (hardly) martial arts action piece, yet affinities are obvious. This film begins with almost ten minutes of following its main characters through a forest. Literally, every shot is a masterpiece of gorgeous atmosphere, of picturesque tree branches out of Caspar David Friedrich, of shafts of sunlight slanting and dappling through the trees, of foggy mists rolling across diagonal hills, all while the music vibrates with as rich an aural landscape as the photography provides a visual one.

While some may wonder if anything’s going to happen soon besides tramping cross country, I believe viewers sensitive to the aesthetic will be too dazzled not to bask. We almost gather the impression that Hu would be content to have this going on for two hours, like a series of living classical tableaux. Indeed, he pushes it in Legend of the Mountain, whose opening forest walk lasts for so long.

Hu isn’t only the writer-director but the art director and editor, and he carefully cuts from many angles to keep a steady pace and constantly renew visual interest. He knows exactly what he’s doing. Instead of being dull, such scenes are full of beauty as well as tension and anticipation.

In a bonus essay, scholar Stephen Teo suggests a philosophical meaning comparing the corrupt, dwarfed humans to the pure, majestic landscape. He also states that much of the film is simply about motion, and that “the narrative seems to fall into a kind of void in which there’s nothing but movement.”

Our three tramping characters are the wealthy and important Esquire Wen (Sun Yueh); a woman he identifies as his concubine but who is actually hired thief White Fox (Hsu Feng); and his alleged servant Chin Suo (Wu Ming-Tsai, the film’s choreographer), seemingly an archetypal dumpy peasant but in fact White Fox’s accomplice. As we gather, Wen commissioned them to steal a priceless scroll from the Buddhist monastery at which they finally arrive.

Once out of the forest, the story takes place in this real historic landmark, an 8th Century temple called Bulguksa. Hu has the run of the place and makes the most of it. For example, his next “nothing happens” setpiece finds White Fox and her sidekick furtively creeping and jumping all over this location, always glancing left or right as they zig-zag from one corner to another on what we eventually figure out is a fruitless initial attempt at canvassing and locating that McGuffin scroll. This film features wall-to-wall skulking.

As in the forest walk, this is what Hitchcock called “pure cinema”, a master class in conveying information visually. The information is: they’re up to something. As a plot development, it ain’t much, but we can’t take our eyes off it.

We soon learn that many characters are converging for schemes and counter-schemes that are pointless to diagram here. What matters is that the venerable bearded Abbot (Chin Chang-Ken) must choose his successor from among three candidates, each supported by a different faction and that a falsely convicted criminal, Chiu Ming (Tung Lin), has just joined the monkhood.

One candidate, Hui Tung, is played by Shih Chun, who enacted the scholar-hero in other Hu films. He’s playing a much less admirable figure here. The most fun visitor is a wily old Buddhist layman, Master Wu Wai (Wu Chia-Hsiang), who travels with a retinue of colorful acrobatic nuns.

But this is almost not a martial arts film. White Fox and her accomplice engage in one short fight in the middle of the story with corrupt lawman-weasel Chang Cheng (Chen Hui-Lou), and then it’s nothing until the forest acrobatics of the last reel. These scenes are rapidly edited and stylized to a fare-thee-well. One fascinating decision Hu makes during the fights is to drop the music that scores so many of the scenes in favor of sound effects: flapping, tapping, snapping.

Just as so much of the “action” amounts merely to motion, the Buddhist moral of the plot underlines the idea that real movement is interior and that worldly human motives for action are vain. Teo points this out, and both he and Tony Rayns’ commentary observes that the corruption within the temple also function as non-Buddhist Hu’s critique of the institution and its infection by worldly motives. In the booklet, Samuel Jamier hints that this depiction possibly has political implications for China and Korea, though such meanings had to remain latent.

As we’ve indicated, Henry Chan’s photography and Ng Tai-Kong’s music deserve praise. Taiwan’s Golden Horse Awards thought so too, for they won their categories, while Hu won as director and art director. In addition to his other duties, Hu drew the calligraphy of the beautiful and artificial opening credits, which is the only place in the film where we really see it raining. The only distracting element in this Blu-ray’s presentation is that the plain white subtitles vanish easily.

With this film, most of Hu’s acknowledged masterpieces are finally available in Region 1 after hiding for decades. That doesn’t mean the work should stop. We hanker to see The Valiant Ones (Zhong lie tu, 1975) and his farewell; the ghost story Painted Skin (Huà Pí Zhī Yīnyáng Fǎwáng, 1992).