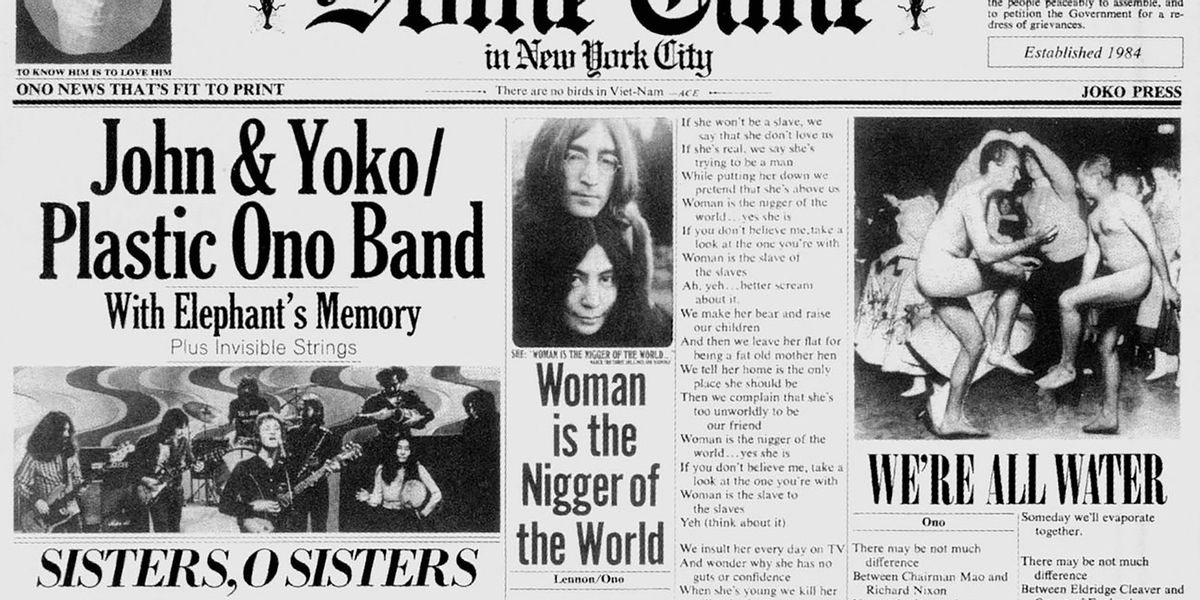 John Lennon’s short life can be roughly divided into two periods: his first 31 years in England and the remaining nine years since moving to New York City, as a born-again American. Although the latter period was significantly shorter, it made a lasting impression just the same. Most of Lennon’s solo career is directly linked to his relocation, a reality enhanced by New York City which made a great effort to recast him as its own. Among the associated immortalizations are the christening of a “Strawberry Fields” section in Central Park, holding a 9/11 benefit concert “Come Together” dedicated to Lennon’s music, releasing a live album recorded at Madison Square Garden. Then there’s the much-celebrated Bob Gruen photo of Lennon posing in a T-shirt bearing the city’s name.

All are quite appropriate gestures, of course, but misleading as well. When Lennon arrived in New York in September 1971, intending to settle in, he quickly became considered a persona non grata, whose moves caught more of the government’s attention than that of the fans. Lennon’s initial term as an American resident was one of the most frenzied and troubled times in his post-Beatles days and is mainly discussed personally while ignoring the accompanying musical output. None of Lennon’s solo efforts has been more looked down upon as his first album recorded in the US, 1972’s Some Time in New York City. It is considered by most as the least crafted or important collaboration he made with Yoko Ono.

Their previous joint albums, Two Virgins (1968) and The Wedding Album (1969), were deemed too experimental for mass adoration and are often noted for Lennon’s way of showing the world that Ono had become his new musical partner. Some Time in New York City‘ disappointed those who had hoped the follow-up to Imagine would be another piano-driven album, where politics gave way to wishful thinking and self-discovery ballads.

Instead, a strictly confrontational record was presented. Lennon sang specifically about the clashes in Northern Ireland, women’s oppression, and celebrating the courage of various activists, some of whom he met and socialized with in New York. His previous battle cries, singles like “Power to the People”, “Instant Karma”, and “Happy Xmas (War is Over)”, were popular enough due to their vague subject matter. Those were similar to Lennon’s initial political manifestation, the “Bed-In” — a dazed happening, which never elevated itself from a media-circus status. The message of Some Time in New York City was harsher and symbolized Lennon’s transition from a hippy to a radical. Even the casual listener was forced to take sides.

Some would argue that the platform professed had nothing to do with the fact that the album never caught on. It’s easy to point out lackluster songwriting and hasty production on it, but the energy and good intentions carry it through by and large. “Angela”, composed in honor of Black Panther Angela Davis, featured one of the few truly moving melodies sung by Lennon and Ono together in that era, regardless of the poor chorus. “They gave you coffee / They gave you tea / They gave you everything but equality.” “New York City” was the only track on the album in which Lennon sang about himself and Ono. It was a straight and most intense rocker, mapping out the sights and sounds hurled upon the couple since moving to New York. An expected tale of their night on the town at the city’s trendy spots such as Max’s Kansas City is mentioned alongside the warm welcome by local scenesters, like singer David Peel. However, according to the song, Lennon’s exhilarating New York experience consisted of cooler moments: a bicycle ride in Greenwich Village and standing on a street corner without being ambushed by the press or fans.

If anything truly hurt Some Time in New York City, it was the indistinctive line between worthy causes, such as supporting national self-determination or indicating grave social injustice and acting to get a pal out of a jam. “John Sinclair” was written about the underground poet sentenced to ten years in prison for giving two joints to an undercover policewoman. Lennon performed his musical bail at the “Free John Now Rally”, which included a massive list of artists, on 10 December 1971. Sinclair was released three days later, but the obsolete song still found its way on the album.

Lennon and Ono felt comfortable enough with their new circle of friends and took some of them to perform on The David Frost Show, a week after the Sinclair rally. They sang “Attica State”, a tune about the recent prison riot which ended with more than 40 dead, inmates and staff alike. On stage, Lennon and the gang cried: “Media blames it on the prisoners / But the prisoners did not kill / Rockefeller pulled the trigger / That is what the people feel.” It turned out that two audience members felt differently and protested loudly. Frost invited them to step down from the balcony and share their view up close. A heated discussion ensued as they took the chance to argue that the song simply glorified the prisoners. Lennon and Ono fell on the defensive side. The shouting match was subsided by Frost’s call for Lennon to repeat singing a few verses, so the listeners could perhaps reach some understanding by concentrating more on the lyrics.

That proved to be a harder task, once the album was in stores. The cover of Some Time in New York City was designed to resemble a newspaper, published by “Joko Press”, in which the lyrics were printed as articles. It also bared The New York Times motto, “News That’s Fit to Print” to mock the establishment and other slogans, such as “Register to Vote”, “There Are No Birds in Vietnam”, and “Don’t Think They Didn’t Know About Hitler” for that underground paper vibe. One of the photos overshadowed the entire gimmick cover by showing then-reigning President Richard Nixon and his nemesis Chairman Mao dancing in the nude, an image made to illustrate the lyrics of Ono’s “We’re All Water”, which dealt with humanity’s suppressed similarities.

Although unifying, the message did not cross over well as Lennon angrily recalled, years later, in an interview for David Sheff. “The stupid retailers stuck a gold sticker over it that you can’t even steam off. At least you could steam off that Beatles cover (a node to the 1965 compilation Yesterday and Today featuring the band in bloody butchers’ clothes with large pieces of meat and decapitated dolls around them). So you see the kind of pressure Yoko and I was getting, not only on a personal level and the public level, but every time we tried to express ourselves, they would ban it, would cover it up, would censor it”.

To broaden its obvious limited appeal, Some Time in New York City was made into a double album, consisting of one volume of Lennon’s live recordings. It captured a set performed in London and a more updated guest appearance at a Frank Zappa show from June 1971. That collector’s treat didn’t upgrade sales and was unsuccessful in diverting another controversy from the album. Its lead single, “Woman Is the N***er of the world”, was a bold statement that was unpleasant to both feminists and radio DJs. It missed the target of raising collective thought and was too explosive for airtime. Yet, the song still stands as one of Lennon’s great vocal performances in the 1970s; its phrase “we make her paint her face and dance” was just as heartfelt as the regret expressed on “Jealous Guy”.

Only three months after their arrival, Lennon and Ono were not just facing concerned citizens and confused fans but also a suspicious government. FBI agents were in attendance at the Sinclair rally, taking notes to be included in the Bureau’s flourishing Lennon file. Officials deemed his criticism of US policies as ungrateful and inflammatory. At one point, Lennon and Ono were notified by the immigration office that they had exceeded their stay as visitors and were expected to leave the country on their own by March 1972, if wishing to avoid deportation. Countless appeals were made, and as the legal battle tangled, Lennon was advised by his lawyer to keep a lower profile. The re-election of Nixon by an unprecedented landslide crushed much of Lennon’s poignant political spirits anyway.

The marriage crisis he faced in the mid-seventies made it easier for him to escape to LA, to hang out with fellow musicians far from the radical clique. His next albums bore personal themes again, one being so trivial as to consist only of rock ‘n’ roll covers. Lennon and Ono’s one obvious political statement around that period was flying to Washington to witness the Watergate hearings; by doing so, reminding a remorseful nation that he was also somewhere on the Nixon administration’s enemy list. A green card declaring permanent residency was finally issued to him in July 1975.