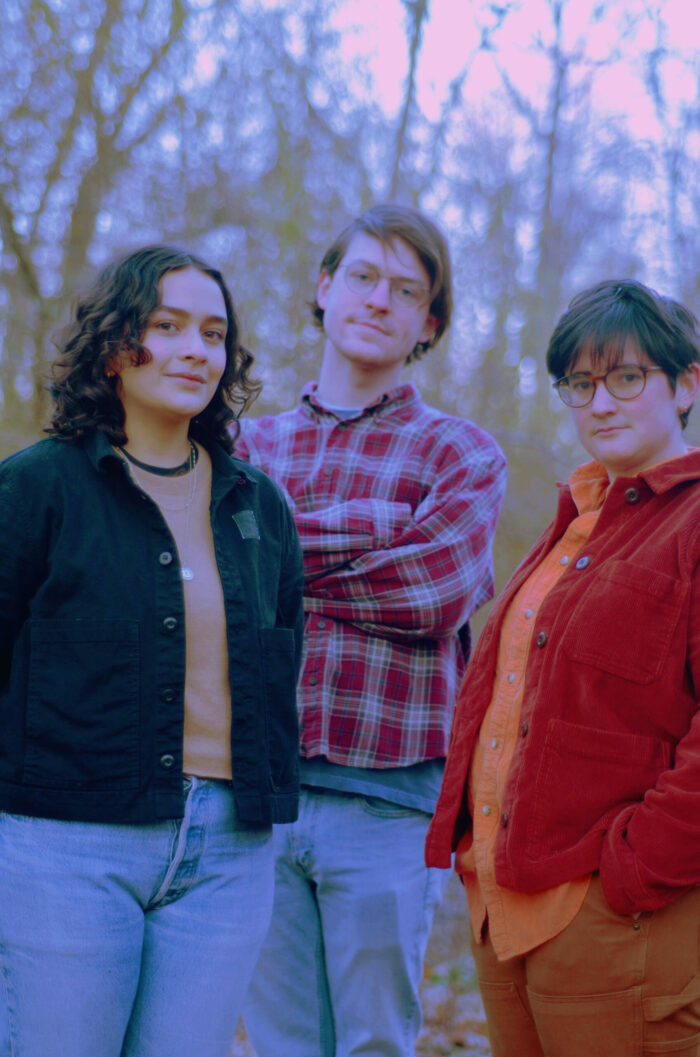 “I don’t know what building that is, but I like it,” said singer-songwriter Carmen Perry who fronts the band Remember Sports. I was intrigued by their new album’s cover art which wore an orange backdrop, sketched faces of the band members, and a corner street view of an old brick apartment complex. “I don’t know the man walking down the street with the umbrella, but it does feel familiar,” she continued. The band formed at Kenyon College in 2012 as college friends and they’ve been making music since. Mostly, I think because they know what it feels like every time. Like many artists getting their starts from sweaty basements in college towns and spending way more money than they earn to make this commitment, they slowly worked their way up. With their latest album Like a Stone, they decided to take an imminent plunge into the unfamiliar. With one eye open, they never strayed too far from home.

“In the space we recorded the album, that’s how we want the songs to sound live,” Perry told me. The band recorded with tour friends Julian and Carlos at Gravesend in Brooklyn. There’s a special, necessary comfort needed when in the studio. In its full intimacy, it’s like sleeping in the safety of your bed. And while Perry told me the band pretty much went in with fully formed demos, it was crucial to have someone they trusted to bounce the peripheral ideas off of. Remember Sports also released two music videos these past few months. “Pinky Ring,” directed by Tim McAleer, was an upgrade from their usual projects. “We need something crazy going on,” said Perry. “Pinky Ring” does exactly this, throwing as many unrelated variables together. In a winter oasis, Perry gears up in elbow pads, a helmet, and goggles to prepare for an egg pelting. The 3D flashes, topped off in post-production, were one of the defining factors in stepping up their game.

“It was my first time lip-syncing, but I never wanted to because it looked like you were being too serious,” said Perry. They were going for the lighthearted and playful. “But we decided to do it for this one because this album marks a new stage in our growth.” In comparison to “Pinky Ring, the “Materialistic” music video took a more frugal approach. Perry revisits herself as a 5-month old baby. “The film had mold in it,” Perry said while compiling clips from an old VHS tape she found in her dad’s basement. She assembled the video on the semi-intuitive iMovie. “It took way more time than needed. Compared to someone who knew what they were doing,” she said, laughing.

The clips captured moments people don’t always stop for; the pixelated basketball screen outside Madison Square Garden, a block party at sunset, and a bouncy castle propped in the middle of the street. The crowd was dispersing. She also weaved in advertisements from that year. Alka-seltzer plus cold medicine, $39.99 red heels, and Snapple creamed vanilla soda anthologized a world that Perry once existed in but could never actually touch. “A 5-month-old doesn’t do that much so a lot of it was either my mom or dad filming me and then probably getting bored because I’m not doing anything and drifting off into the scenery, the people,” Perry said. “It felt like a good way to memorialize a specific moment in my life in NY.” The intent to eschew post-production for the video cemented the band’s home base grit. They’ve been doing everything by themselves from the beginning. The excitement lives in not looking back, nor double-checking, or asking too many questions but hoping people will listen, given the limited resources.

“At 14, I started hating the world and would go out to the roof of my bedroom window with my iPod and listen to Rilo Kiley and Bright Eyes and Tegan and Sara,” she said. “I’d watch the sun go down in my town.” At that age, music was perhaps one of the only things that made sense—you couldn’t touch or feel it, and it wasn’t volatile because you could always know what you were getting. “It just doesn’t feel the same as it did back then,” Perry and I agreed, laughing. There’s a visceral feeling emerging from being sincerely connected the very first time hearing something.

Remember Sports headlined tours in the past and will continue to do so when shows return. However, there’s always a yearning for the small energy and connection, like making a dessert as an adult that a grandparent fed you growing up. “I always enjoy smaller DIY shows more than bigger shows. There’s something incredible about playing to a bunch of people at once who seem at least semi-interested,” Perry told me. “If we didn’t think that feeling was worth pursuing, we wouldn’t still be doing this in the capacity we are doing it.” Like a Stone is a fresh gust of wind and their most produced album to date. But they’ll always remember where they came from.

Like a Stone is out now on Father/Daughter Records