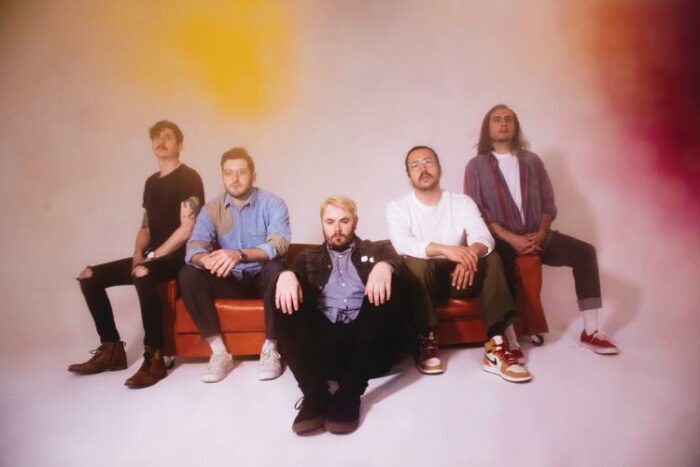 Emo rockers Free Throw have been redefining the music scene for the past 10 years. Bred from their hometown in Nashville, Tennessee, the genre wasn’t always well-received by locals. Strung with neat guitar leads, tons of dynamic, mastery of vocal layering, and a vibrant punch on each line, singer-songwriter Cory Castro sings about maintaining relationships. Specifically, he hones in on the realization of hard work that it takes. Simultaneously, the album is sewn together with the same grit that props it as another modern emo soundtrack for the summer.

Castro was generous enough to chat with The Popdosemagazine and give us an inside scoop on how the music came to be during this past year and a half. We talked about what made this album shine, the small pleasures of going on tour, the volatile history of Nashville’s music scenes, and a take on Love’s Travel Stop’s notorious fancy tour shower, among other things.

The Popdosemagazine: To start, can you tell me a bit about the new Piecing It Together album? Was it a pandemic album?

Cory Castro: It’s our fourth album, which is crazy because we’ve been a band for 10 years. It doesn’t feel that long. The idea didn’t start out as a pandemic album. We had plans to write another album two summers ago when we weren’t on tour and then COVID happened. Our tour ended and we went home early. As COVID snowballed, we stepped back on the process and were writing on our own for a bit. We’d get COVID tested and take weekend trips to the mountains, get an Airbnb, and write together in the middle of nowhere away from civilization. It served the album better because we weren’t touring and there wasn’t much else to distract our focus. It sucks to say it took a pandemic to get our most focused record out of us. That’s one bright side to the situation. The record became the best I feel it could’ve been. There wasn’t a whirlwind of touring and being in the studio.

I completely agree. A lot of bands were able to focus because they had that excess time. And I’m wondering— with this time granted, what changed from your last album, whether that be musically or lyrically?

On the last record, I talked a lot about working my way out of a dark spot and getting better. This new record is more about a realization that after you get better, it’s not like you’re better until the end of time. There’s still ebb and flow in life, and this album is about growing up and realizing that. You get better and then you maintain that consistency and try to not let yourself go back down. It’s still a Free Throw record, lyrically. There are still those personal undertones. Musically is where it got to shine. We had to take more time to make it. We didn’t have a schedule when we were writing at all. We would write songs and have the time to look back and fine-tune them.

I read online that Nashville wasn’t always super appreciative of the emo scene. Can you say more about that?

Yes of course. I love this city and was born and raised here. I have a deep love for this city. The band all developed this deep love for the city living here for a few years. But I don’t think it was always given back. This was the first time I’ve been interviewed by the local magazine, Nashville Scene. The Nashville punk rock and emo scenes have always existed, but they’ve either been really small or popped off for a bit and then died back down. The majority of people who work in music here are either in pop, rock, or country music. Nashville has a huge hardcore scene from time to time. It gets big then backs down to medium size. The most attention we received here in that long run was from spillover from the hardcore scene. People who were really involved there tend to dip their toes in emo. In our earlier days, we played a lot of their shows. One time we played a show with Black Mask as the headliner.

And then there was a period where Nashville was big into the emo scene. A lot of bands were coming through on tour. A lot of local ones started to pop up. But the houses hosting shows started shutting down. Like most DIY scenes, the places you go to all the time aren’t there anymore and then that wave takes a break. And I’m still waiting for that next one in Nashville to pop back up. Hopefully, some of our small venues will still be around or another one will open up eventually.

How long has that emo/punk scene has plateaued?

A long time (laughing), it’s been a couple of years at least.

What made you decide to take on a genre that wasn’t super popular locally?

The way the band started was that Larry and I were hanging out drinking beers and we were listening to a bunch of Topshelf Records records. We just decided to write a song and start a band. Justin came home from work and we were like “dude, you’re in a band now.” We found someone to play drums with. We didn’t have any intention for this to be a full-time band. We just made a drunken decision to do it. We knew we wanted to play emo-esque stuff because that’s what we were listening to at the time. I didn’t think about Nashville’s music scene not having anything like that. This was just the music we wanted to play.

That’s awesome. You don’t ever need to be influenced by the scenes around you.

I was watching your music video for “Cloud Sick” and it seems like y’all are pretty big fans of local things: bars, cuisine, and small details that make a town special. When you go on tour, is that local flair something you seek out?

Sometimes I think it’s subconscious, even when we get to a new town. We’ll load in, set up, and soundcheck, and then we’ll start walking around town. We’ll text each other saying, “there’s a bar here with a pool table and cheap drinks or a nice coffee shop down the street.” These places start becoming staples when we return on our next tour. Every time we go to Buffalo, we go down this strip of bars; we get wings at this one place, then we go across the street and play flip cup at another bar and then we go to this bar two blocks down. It’s this whole routine we have.

Is there something the band likes to do together when touring?

We all like the same things, like getting a drink and eating good food. We all like to bowl. If we can get tickets to a theme park, that’s definitely on our checklist. Oh, and hotels with hot tubs. We’re getting older, so hot tubs always help the joints.

Have you ever taken a fancy shower at Love’s? [a trucker stop chain] They’re like, what, twenty-five dollars? (I fact-checked this after my interview and showers at Love’s are actually around the twelve-dollar range).

I haven’t (laughing) but I know a couple of the other guys have. Usually, when we stop there and there’s time to take a shower, I’m passed out in the van. I’m a car sleeper for sure.

I agree, if you’re paying for a shower, it’s probably pretty good.

Yeah, if I’m paying for a shower, it better be a marble shower (laughing)

Yes, we announced the headliner for this record. I was talking to someone recently about tours starting to come back. The pandemic’s not fully over yet. And if it comes down to it and touring still shouldn’t be happening by the time these announced tours happen, they can always postpone. There’s always an exit button on that idea. That’s always an option. Nevertheless, I’m excited. I’m ready to get back on the road. This is the longest I’ve gone without touring or playing shows since I was 19.

Have you been working other jobs during the pandemic?

I’ve been door dashing and I’m a Twitch affiliate so I try to maintain some type of presence online.

That’s awesome because there were many people who had to give up the arts entirely because they weren’t making nearly enough to live. It’s inspiring to see you do it.

The idea of like, fuck it, and get a normal job and make enough money to live in a house and support my girlfriend and my cats were tempting. I’d be a liar if I said that didn’t cross my mind at least a couple of times, but I stuck it out.

Unrelated, but there is this hot debate question. And it’s what is punk-pop and what is pop-punk. Do you identify yourself as either one of those?

I don’t have a thorough answer for this. Genres are so blurry especially as more subgenres branch out. It’s like watching a branch grow; like oh, this is music, but every time a branch grows out, it’s is a new part. And the leaves hide other genres from what you can see. It’s hard to nail down. It comes down to what bands want to self-identify as when it gets that nitpicky. People have called Free Throw a pop-punk band before but I don’t consider us to be one. We’re making music, we’re not setting out with the intention to make pop-punk. At the end of the day, a genre is just this construct that helps people sort things.

Absolutely. Nowadays, it’s more accurate to describe a band to someone by comparing them side-by-side to other bands.

Yeah definitely, that’s what I do. I tell people that if you like this band, you’ll probably like this. Or if they’re older, I just say “punk rock” band. I just leave it at the most general. If I told my friend’s grandma I played in an emo band, she’d be like whaaaat.

Piecing It Together is out now on Triple Crown Records