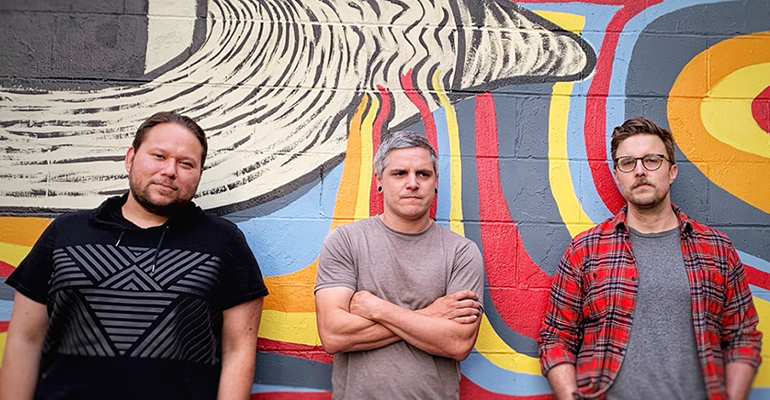 Seattle post-hardcore band Fixtures is keeping alive the sort of throaty, rough-around-the-edges post-hardcore popularized by groups like Hot Water Music, Small Brown Bike, and The Casket Lottery. Their debut LP Life in Retreat, released in April, is one of the best takes on the style in recent memory. I spoke to vocalist/guitarist Kyle Schaffer about forming a band during a pandemic, influences on the band, and what to expect in the future from Fixtures.
How have you been doing throughout the pandemic?
I guess surprisingly okay. As a band it’s been a bit frustrating and demoralizing at times, but then again this project was started in the middle of the pandemic which, by all accounts, is a terrible idea. I guess we’re just stubborn. On a personal level, we feel extremely lucky in terms of having our jobs and overall stability stay relatively unchanged. I definitely feel for people who have been adversely affected by the past year, and I’m just really grateful most of my family and friends are doing well and have managed to weather the storm, so to speak. In the grand scheme of things, figuring out how to work on a band is pretty inconsequential when considered next to the toll the pandemic continues to take across the world, so I feel stupidly lucky and grateful I get to spend any time on music.
How did Fixtures form?
The band started as a recording project for me during the pandemic. I had skeletons of these songs sitting on my laptop and I decided to take a crack at finishing them and fleshing out other parts beyond just the guitar riffs. I would post snippets of the songs on social media, and some of those clips caught the ear of our original drummer Cesar Salmerón, who reached out to me. We talked for a bit remotely, but then spent a few months without doing anything due to COVID (this would have been maybe later summer, early fall 2020). Finally, we decided to go for it and try some socially distanced, but in-person, practice sessions and it sort of just came together.
We rehearsed like that for a while – just the two of us in a room, feeling out the songs – before we put an ad up on Craigslist for a bassist. Jeff was crazy enough to come in to try out during a global health crisis, and I knew pretty immediately he was a good fit. He played the parts really well, and just got the sound of the songs intuitively. Since then, Cesar has had to step back from the project to take care of family which has been tough for us and we’ll really miss him being in the band. He’ll always be a friend and, in all likelihood, this project would not have gotten off the ground without him. Jeff and I decided to push forward with finding a permanent replacement and found our current drummer Matt, who is by far the most experienced in the Seattle music scene between the three of us. We are super happy to have him on board. So, it’s been a bit of a rocky start but it feels good to be where we’re at and to be slowly making progress.
How would you describe your sound to readers who’ve never heard your band?
I always point people to bands from the early 2000s on labels like Dischord and DeSoto Records –– so kind of that earlier era of post-hardcore with weird, math rock arrangements.
What sorts of bands inspired your writing?
All that stuff from Dischord Records like Faraquet, Q and Not U, Fugazi, and lots of Midwest stuff like Shiner, Small Brown Bike, Bear vs. Shark, and Giants Chair. Devin Ocampo from Faraquet, Medications, and most recently The Effects is one of my favorite guitar players, and I’m always trying to rip him off and failing because he is so much more talented than I’ll ever be.

Why did you decide to title the record Life in Retreat?

The title of the record is a reference to how we’ve all had to retreat from our normal lives during the pandemic. I think lyrically a lot of the songs explore thoughts I’ve kind of been confronted with during that imposed retreat or isolation, and the title just seemed to fit the overall mood of a lot of the songs.

Now that shows are starting to come back, who are three bands you’d want to tour with?
Oh man, I don’t know how much extensive touring we have in our future, but there are definitely bands around Seattle we’d love to play with! Reader is a band I’m always bringing up to people –– seeing them play live was a big inspiration for working more seriously on Fixtures. Glose is another mathy/proggy band that absolutely rips that we’d love to play shows with. Finally, getting into wishlist territory, These Arms Are Snakes just announced they’re doing some one-off shows in Seattle and those guys have put out what are, to my mind, some perfect post-hardcore records. Also, Brian Cook is my absolute favorite bassist (sorry Jeff!) and I can still remember being kind of shocked seeing him at a grocery store in town when I first moved to Seattle.
I know the album is only a couple months old, but what can we expect from Fixtures in the near future?
I think the two biggest things are just playing shows around Seattle for anyone who will have us (we have yet to play our first show) and working on new material. There are already a few new songs that have a pretty strong skeleton, and Jeff (the bassist) and I have been sending some ideas back and forth via email. We’re definitely interested in reaching more people – we’re not sure what that looks like logistically, if that means trying to work with a small label or pounding things out DIY the way we have been. All in all, we’re just excited to play these songs in front of other people, and to develop relationships with other bands in Seattle. I think individually, all of us had stepped away from music for quite a while, so we’re really excited to feel like we’re a part of a community again.

Life in Retreat is out now.