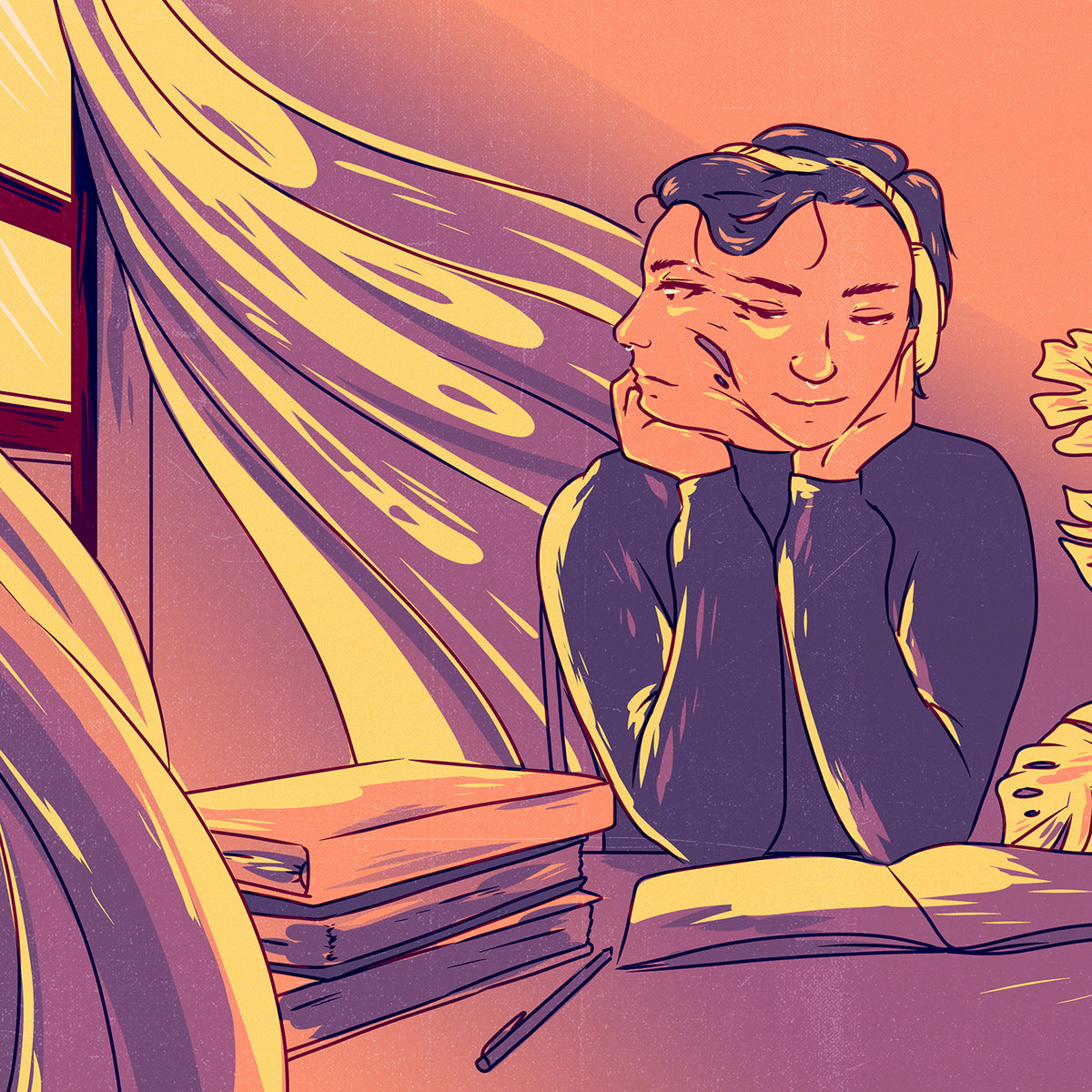 Interview + Album Premiere: sucker supreme to study and relax to Back in April, Rosie Tucker released their third album Sucker Supreme, 14-tracks of bolting alternative pop, highlighting the charismatic energy we know their music to be. The band recorded in Tucker’s parents’ California cabin with Wolfy, who produced the album, Jess, and themself. “It was snowing and we rearranged the furniture to record guitars. We were cooking for each other every night and playing so much Mario Kart,” they recalled. When recording vocals separately in an apartment, Tucker turned off the air conditioner and shrouded themselves in a down comforter meshed in heat. It hung in a closet, muffling the noise.

“What’s so magical about recording is that it’s a million little puzzles,” Tucker told me. There’s this sound in Mario Kart when a character is struck by lightning. The music stays, except the pitch wobbles. On “Airport,” Tucker used Wolfy’s broken butterfly pedal (all the pedals on his board are replaced by small pictures of Harry Styles’ tattoos so they never know what pedal it is) to mimic that effect.

For the duo, sucker supreme to study and relax to, the reimagined lo-fi version of Tucker’s Sucker Supreme witnessed many of the similar variables of working within restrictions yet expecting much more from the final product. This was also a perfect quarantine project when not able to record or write new music. Wolfy and Tucker have both been listening to lots of lo-fi and Bossa Nova lately. Wolfy loves instrumental and world music in different languages. “This is music that basically lowers the heart rate,” he said.

Lo-fi rides a natural ebb and flow of the small finesse, or rather, collaging a series of unexpected blips from recording. It’s like grabbing a cart full of items from a grocery store because you’re starving only to figure out what you can make when you get home. On top of that, the genre is a widely accessible form, both as a listener and as a creator. During the glue of quarantine, Tucker taught music tech to middle schoolers, familiarizing them with sample packs and loops that were available for free online. That clarity and ambition of lo-fi are no different from other forms of art-making, regardless of your age or expertise; you take what’s familiar, often in the confines of limited resources, and cement it into what you know best. This was true for Wolfy, too, since as a producer, he doesn’t always get opportunities to cover music.

“I don’t want to spend too much time perfecting any one thing, but with lo-fi, it’s so easy and exciting because it’s all the same,” Wolfy told me. There’s a consistency to operating well-oiled magic. You choose a similar tempo and a template. You add a kick, snare, hi-hat, synth bass, and piano, and then write a melody. “It’s so atmospheric and gentle and it’s kind of like okay, here’s an arpeggiation for more rhythm,” Wolfy said. It’s subtle, and relaxing enough to keep you situated; like laying your head on someone’s shoulder while a train roars by.

And of course, Wolfy included a tent of lo-fi cliches; rustled leaves, vestiges of street noise, intentionally placed fuzz, a deluge of rain droplets of varying intensities, and crevices for bird chirps. “A lot of my favorite songs on the lo-fi album, like “Brand New Beast” and “Different Animal,” are my least favorite songs on the album. I found new tempos and sounds in the lo-fi ones,” he continued. Sometimes I changed the chords, and I enjoyed connecting with the songs a lot more.”

For Tucker, sucker supreme to study and relax was completely hands-off for them. It was especially cool to see an album that focuses heavily on lyrics (for instance, when Tucker sings, “Chewing on my fat lip, contemplate the cool whip / Cover dish and chill for a while” in “Ambrosia” or “Wolfing down Doritos, licking on my fingers / Anger on my tongue, Doritos in my angеr” in For Sale: Pinto) and its incredible transformation into the instrumental sphere. “When producing an album meant to be sung there’s so much effort on thinking about the song as a whole and what it needs for the message of a song to translate to a listener,” they said. “It’s interesting to see these songs transformed to lo-fi. Lo-fi songs barely have melodies. Most of them are not trying to catch your ear or pull you out of what you’re doing, it’s Muzak.”

“Someone in the universe played it and anyone can use it, it’s very anonymous,” they said. “It’s trying to create something to the formula that is also satisfying,” they ended.

Besides sucker supreme to study and relax, look out for Wolfy’s One Direction lo-fi rendition coming out later this year. It’ll be live on the 1D Reddit (mainly for the superfans, but now you know.) And he’s on a mission to cover every One Direction album in different styles. “It’s not a phase, it’s my life,” he said, laughing.

sucker supreme to study and relax to is available September 10th via Epitaph Records. Pre-order here.