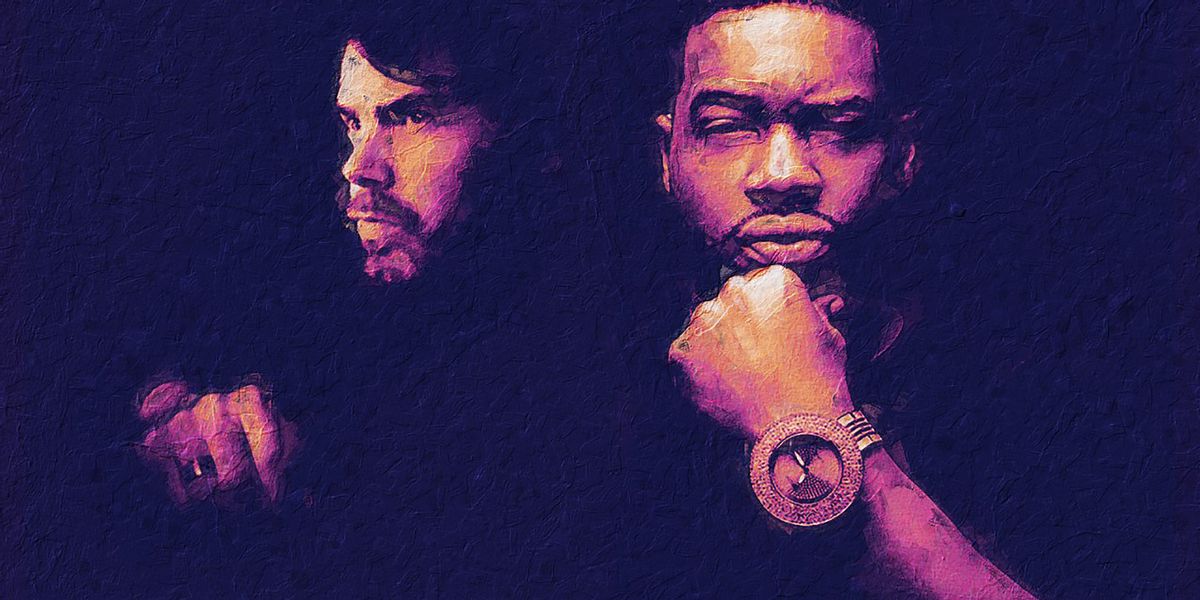 The two first met at a Roots show and in no time did they begin exchanging beats and rhymes. MC Mattic and producer Johnny Madwreck have since been quietly orchestrating works of deft beauty these last 20 years or so. The North Carolina natives made their proper debut as part of the underground hip-hop collective the Others, alongside producer DR). Past Futuristic, the Others’ 2004 album of soulful, funkified boom-bap, demonstrates an expert showmanship in honed mic-skills and impeccably crafted beats. It caught the ears of some hip-hop notables who invited the group on several tours across the US. But before they could further themselves with a second album, the Others were woefully extinguished.

Fast-forward 16 years and the two men have reunited as
Ill Scholars, a duo that trades on all the good stuff that made the Others great, plus a host of new ideas that plumbs even deeper the depths of their combined talents.

“We’ve known each other for so long,” says Mattic, now based in France. “We’re more than just comrades in the field of sound. We’re actually really good friends. The cool thing about John, working on this, is he tailor-made all of these beats for me. And I work with a lot of beatmakers, but rarely ones that have tailor-made beats for me. They just send a batch of beats and you pick out the ones that are dope. But the person that tailor-makes beats for you, that’s a blessing. They have you in mind…what you do and how you do it.”

“I know [Mattic’s] personality,” Madwreck adds, “and it’s a big, wide, fourth dimensional landscape of rhymes that he works with. So, I had to come up with beats that sort of cover that distance that he covers with his rhymes, and yet capture the golden-era jazz, electronic sound that complements Mattic’s voice and lyrics. With any project, you go in with an idea and then it always just morphs into something else. I went into this project with Mattic thinking ‘I wanna makes some beats that sound like they came from ’93, that don’t sound like anything else like what’s going on – just high energy, uptempo beats that Mattic would sound good on.

“I think this is the only album where I let Mattic co-produce. If you listen to these tracks, you’ll hear there’s an extra layer of sounds on some of these beats where Mattic let his creative ideas flow and where he dropped in elements to enhance the beats – almost like adlibs under his verses. And I think that really helped bring these beats to life and really give [the album] its signature sound that makes it different from other stuff we’ve worked on.”

After the Others disbanded, Mattic would further prove himself an accomplished wordsmith with two highly touted underground solo releases, The Abstract Convention (2012) and The Adventures of Doctor Outer (2014). And like those two albums, his work in Ill Scholars features a rhyme-scheme that is delivered with sharp-shooting dynamism. Fueled by the baritones of his rollercoastering delivery, Mattic’s explosive poetry hits all intended targets with a message of self-sufficiency in the storms of global confusion.

“I came up in the age – they call it the Golden Age of hip-hop – and the things that always interested me were when people were [rapping] about how ill the set-up was, the voice and patterns,” Mattic explains. “That’s what I patterned myself after. Stuff that made you think. And there’s a lot of music that’s still out there like that, but really not going around as much. People don’t like to think. Maybe that’s why the world is so messed up. They don’t wanna go digging for it. They need it to be given to them right then and there, in the most basic way possible. And I don’t wanna do that. So, it started with the track “Daryl”.

Madwreck sent me this track and the agreement was no lo-fi beats, because we needed to break the trend of just lo-fi beats – everybody’s doing lo-fi beats in our section of the hip-hop world. We wanted to go back to the boom-bap and John’s idea was ‘What do you think of KMD, 3rd Bass type of boom-bap?’ Those were the examples. And he just went to work with them and injected himself into that sound. So, he sent me the track “Daryl”, a video of him playing it on his machine, and that set the tone to just go into my writing.”

Indeed, the rhymes heard on Ill Scholars’ self-titled album is the work of a man smartly aggregating his influences with a cultured hip-hop sensibility. Mattic’s touchstones include luminaries like De La Soul, EPMD, and Rakim and he offers a lyricism that is unpredictable and raw, bridging his lyrical influences together in new ways so that his rhymes become something entirely else altogether.

For his part, Madwreck builds on the back of his already established beat-making talents. As a member of the avant-hip-hop collective Dirty Art Club, Madwreck has been tirelessly making a name for himself as one of hip-hop’s most inventive stalwarts. Ill Scholars brings him full circle from his days in the Others, offering a set of lush and pumping beats that throb like a proud, palpitating heart.

Ill Scholars’ self-titled debut is an album of heavy, jazz-laden hip-hop. The first single to make it out of the stables is “Magic”, a thunderous run that skims the exploratory reaches of Mattic’s rhymes and Madwreck’s production. And there are plenty more dicey pleasures to be had on the rest of the album, as well. The title-track, a smooth polyrhythmic shake-and-shuffle, allows unadulterated space for Mattic to spit his rhymes with natural ease. The cold, booming strut of “The Kraken” is offset by Twilight Zone atmospherics. And “Daryl” finds an accessible counterpoint between Blue Note decadence and South Bronx turntablist grit.

Despite all the joys to be had in listening to the album, Ill Scholars was born from difficult, life-altering moments. “Almost a year ago, I was in the hospital with my dad,” Madwreck reflects. “I only talked to a few people as my dad was passing away, and Mattic was one of them. I always wanted to produce a solo album for Mattic and in that conversation we had, I told him, ‘I wanna make that album, I wanna make that solo album, just me and you.’ And we agreed on that and then, shortly after, we started working on it.”

“When John’s father was dying, we talked and we wanted to do this album,” Mattic further explains. “And, of course, I agreed. It came down – us getting started on working on it – exactly at the time of the [Covid-19] confinement and ended as we knew it. We don’t want to say this is a confinement album, but this was the time that we created it…the pandemic and quarantine was dropping, and, to unplug from the madness, I needed to get into my groove, my own universe.”

Mattic and Madwreck have often approached their songwriting with a heads-down, eyes-on-your-own-work approach, unmindful of the activity from their peers swirling around them. This might explain how wide renown has eluded the two men for so long; perhaps their reclusive methods beget such results. But they remain one of hip-hop’s most imaginative and seasoned progenies, carving a singular niche for themselves amongst a never-ending influx of upstarts. If, however, they should ever shift out of their small and private orbit, Ill Scholars’ eventual supernova should be a thrilling spectacle, indeed.