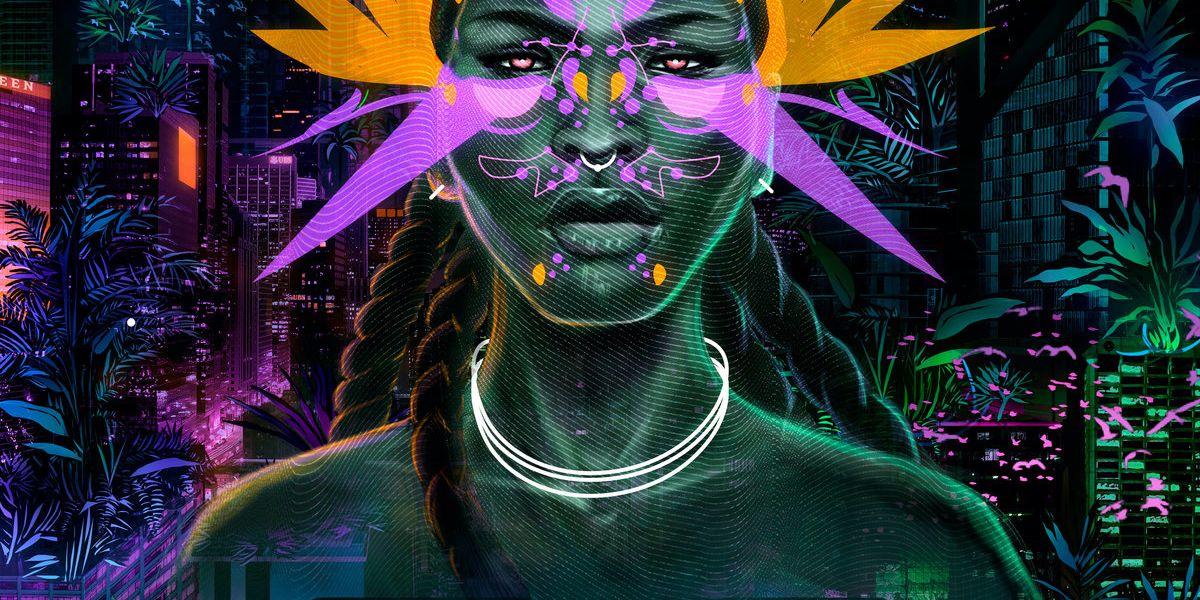 “We created an African tribe look from the future. A psychedelic African tribe from the 21st century,” says Edgardo Garces (aka Guajiro), in regard to Ghetto Kumbé’s aesthetic. This is evident from the Afrofuturistic album art on the group’s debut LP. It’s also evident in their music, in its mishmash of traditional African rhythms and popular Latin house beats. There’s something raw, primal, and earthy in Ghetto Kumbé’s music, with its hand drums, wood flutes, and call-and-response vocals. But it’s also full of funky bass, Caribbean grooves, and hi-fi electronic production, lending it an Afrofuturism aura.

The group consists of Guajiro, Chongo (Juan Carlos Puello), and Doctor Keyta (Andres Mercado). Their first EP, 2016’s Kumbé, showed flashes of greatness. But 2017’s Soy Selva is where they really put it all together. On tracks like “Ware Warrior” and “Dagbani Dance”, they fused classic Latin beats and raps with choral vocals that sounded straight out of the African heartland. There was a foreboding tone to many of the songs, with lots of eerie flutes, rumbling bass, and sinister vocals. On their first full-length album, Ghetto Kumbé, things are brighter, but by no means lighter. These 11 tracks pack a powerful, politically-charged gut-punch. They prove this trio is here to stay.

Songs like and “Sola” and “Esta Pillao” unite bongos and shakers with pummeling kick drums. On the club-ready “Cara a Cara”, the group combine classic Spanish guitar work with an aggressive Latin groove and gorgeous call-and-response vocals. Even the album’s lone instrumental track, “Interludio”, goes hard, featuring one of the tightest drum workouts you’ll hear all year. It’s supposed to be an interlude, but it feels too good for one.

The group often take turns rapping and singing, with Chongo doing most of the rapping and all three singing many of the choruses together. Their chemistry works brilliantly, especially on tracks like “Vamo a Dale Duro”. Guajiro sings the opening verse, Chongo raps the second, and all three join forces in the chorus. The lyrics are intensely political, with Chongo rapping: “Trasnocho sin parar, con la justicia el maltrato / Tu supuesto trato, solo dolor nos trajo” (“I stay up all night without stopping, with justice for your mistreatment / Your so-called deal only brought us pain”). The song is a scathing critique of hyper-capitalist systems and the divisions they foster between rich and poor. The chorus is irresistibly catchy and takes place amidst a backdrop of stampeding bongos and airy reed flutes. It proves that as great as Soy Selva was, Ghetto Kumbé’s tight songwriting and knack for hooks have only improved.

The best moment on the album, however, belongs to “Tambo”. The song opens with a series of echoey wah-wah synths and light, skittering hand drums. Then Keyta steps in and delivers an absolutely soaring vocal melody with rallying calls of “tambo” (“drum”) from the other bandmates. Keyta sings, “Tambo, tambo, tambo, sacame esta pena, aliviame el dolor” (“drum, drum, drum, take this suffering out of me, relieve my pain”). The way Keyta’s vocals rise and swoop over the instrumentals, ascending in pitch with each repetition of “tambo”, only adds to the lyrics’ catharsis. This is a song that tugs at your heartstrings, so directly and so viscerally, you can feel the weight being lifted off your shoulders as Keyta sings. It’s the most beautiful thing Ghetto Kumbé have written yet.

The LP has two features, and both of them land. Kombelisa Mi raps on the last track, “Lengua Ri Suto”, adding flair to one of the album’s weaker, less melodic pieces. Melanie Bourire, a member of the French group Saodaj, sings on “Djabe”. Her vocals lend a haunting quality to the music, offsetting Chongo’s more aggressive, nasally rapping. These features only strengthen an album that was already strong, to begin with.