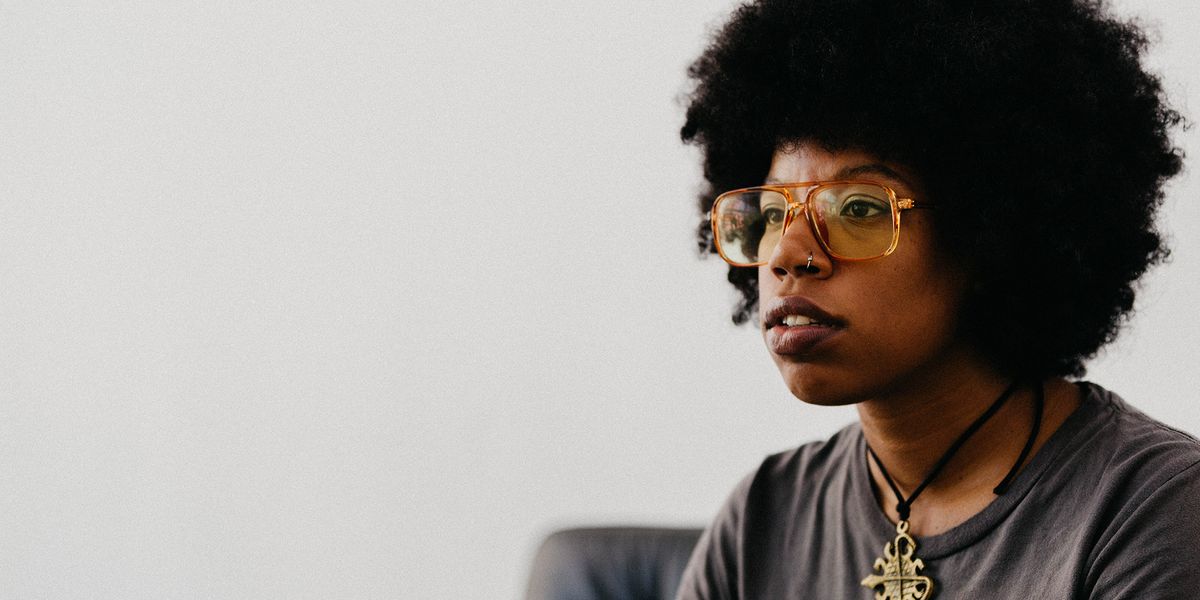 Jyoti’s (aka Georgia Anne Muldrow) Mama, You Can Bet! is a revelation — of time, of rhythm, of sound. It takes the free-ranging jazz sensibilities of her previous outings under the Jyoti moniker (follows 2013’s Denderah and 2010’s Ocotea) and gives them a next-level boost. The legendary Alice Coltrane gave her this nickname, and Muldrow certainly puts all of her musical wisdom and power behind it.

This time, she adds depth through what is perhaps her best instrument, her voice. This acts as a contrast to what we’ve been fortunate and accustomed to hearing from her in the realm of R&B, hip-hop, and spacey funk. Is there a “post-funk” label we could apply here? If so, maybe we should.

The logical and natural entryway into this album is the title track, the opener. It moseys along, with its thumping bass, proving that inspiration need not arrive in a flash. “Mama,” sings Muldrow, “love is waiting for you…I know love is waiting around the corner.” Content-wise, the song is meant as a homage to Muldrow’s mother. Figuratively, it speaks to any mother, as a wellness check of sorts for mothers who normally guide us to sources of love instead of the other way around. There’s also a universal vibe, as in a tribute to our inborn intelligence (mother wit), expression through language (mother tongue), grounded in a wellspring of support (motherlode), all with cosmic alignment (mother nature).

But, artistically, the real soul of this album, and the key to its conceptual underpinnings, rests with Muldrow’s nimble retooling of two Charles Mingus compositions. Take the seductive wail and brassy sway of Mingus’s “Bemoanable Lady” and then listen to Muldrow’s “gee mix” in which she snips it, chops it, and flips it, adding crisp percussion along with a haunting and swirling shriek. Pianist Jason Moran, of Washington D.C.’s Kennedy Center, recruited Muldrow for a live set dubbed “Muldrow Meets Mingus”. Well, this is Mingus meets Funkadelic. Transformed into loops, “The Revolution” has been digitized, undulating, and cyclical, so that “now” is intertwined with “then”. The result asks us to reconfigure our conceptions of “time”.

And what about the Kennedy Center’s “Muldrow Meets Mingus” concept? With its coverage of famed Mingus pieces like “Fables of Faubus” and “Goodbye Pork Pie Hat”, it’s a lesson in creating transformative art as Muldrow interprets jazz through current technology. Then she reverses course to reinterpret her work for a live performance. It’s this interplay that’s presented on Mama, You Can Bet! in the other Mingus-inspired “gee mix”, “Fabus Foo”. Here, the multi-instrumentalist juxtaposes the up-tempo horn of the original and embeds it within the bassline, a sort of aural origami not unlike what we found in producer J Dilla’s 2006 swansong Donuts or just about anything from frequent Muldrow collaborators Madlib and Flying Lotus.

Once the album’s soul touches you, it’s an inescapable listening experience, from “This Walk” and its inevitable but artistically earned channeling of Nina Simone, to the buildup of “joyful noise” found in “RA’s Noise (Thukumbado)” and Muldrow’s layering of rhythm, guitar riffs, and chants.

The fusion of “Joy” and “noise” is a running theme that you find most clearly in the tracks with musical or dance references in the titles. First, there are the “bop” songs. “Bop for Aneho” lands softly, over quilted beats, yet frenetic and energized in contrast to the subdued singing. “Hard Bap Duke” offers a squishy bassline and provides a seminar in creating organization out of chaos. So dissonant and so segmented, you nevertheless feel the song’s elements sliding together as the song shifts along in a sonic collage. You’ll then find the dancing tracks, as in the atonal piano of album closer “The Cowrie Waltz” and “Swing Kirikou Swing”. Both songs sound like variations of an ice cream truck jingle in need of repair. Yet, it somehow works.

Most importantly, though, this album presents the notion that the concept of time — that immutable and inexorable friend and enemy to us all — can be influenced, if not managed, by rhythm and speed. Muldrow accomplishes this with movements in a rambunctious triple time or with piano stabs delivered slightly behind the beat. She deftly connects these disparate elements, and then she allows them to become unglued and unstuck from compositions that always threaten to become unhinged.