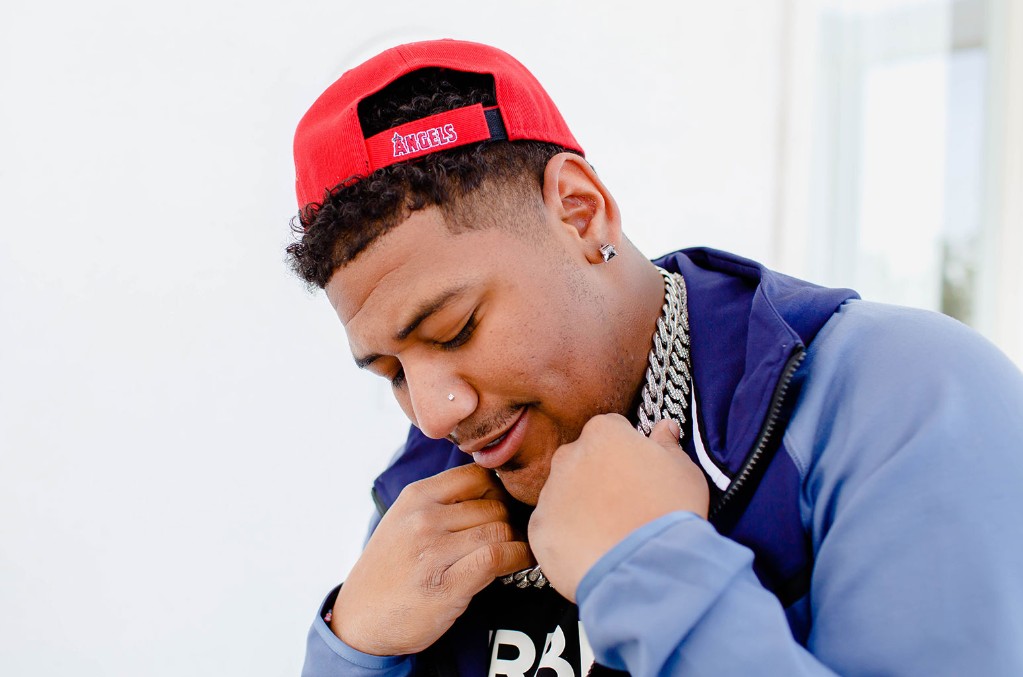 “When I walked back through campus, all I saw were all my CDs I made thrown all over the ground,” says Derrick Milano. Fresh off a flight from Toronto, he sits comfortably on a couch at Billboard’s New York office, reflecting about the early days of his artist career back when he was attending college in Florida, stretching his last dollars to invest in making CDs of his music to pass out, only to find them spread out on the pavement.

“If there’s one thing that chapter in my life in Florida taught me, it’s persistence. Imagine I had just stopped then and there after seeing that?” he continues. Fast forward to 2020, and persistence is what kept him in the game.

On one of the busiest days of music releases so far (March 13), a certain name in the credits keeps reappearing. By now, Derrick Milano, a Philadelphia, Pa.-bred artist, has slowly but surely earned the trust and respect of the hottest stars. He landed credits on DaniLeigh’s new track “Levi High” featuring DaBaby; Rich The Kid’s new album, BOSS MAN; and and Kiana Lede’s “Forfeit” featuring Lucky Daye, with plenty more in the works behind the scenes.

Although being a recording artist was always the goal at the top of the list, Derrick Milano is best described as the man who continuously refuses to be boxed in. His ability to shape-shift to fit whatever role is needed to bring the best out of any track being worked on, makes him an undeniable influence in the room as a production connoisseur. From A&R-ing a huge chart-topping hit from start to finish Megan Thee Stallion’s “Hot Girl Summer”, to ad-libbing on records including Nicki Minaj’s “Yikes,” to co-writing for singers such as Justin Bieber, Kehlani, and Kiana Lede, Milano’s artistry and capacity to help other artists knows no bounds.

Before the high profile studio sessions with artists such as Nas, Cardi B, Juicy J, and Minaj lies a lifelong journey of chasing dreams. Milano took no shortcuts, though, and the quest has been documented to prove it. From singing in the church choir, to scrolling for hours on SoundClick looking for beats to rap over, to battle rapping in high school and eventually hustling endlessly to make a name for himself in college, Milano built up his career brick by brick, ensuring the years of work would prepare him for his pivotal moment.

Milano stopped by Billboard to discuss how he built his career from the ground up, bringing all the pieces to “Hot Girl Summer” together, what made Pop Smoke special, and more.

Check out the full conversation below.

Where did this whole “Wow, a legend” phrase you always say come from?

It started off as a joke. I was just commenting under everyone’s picture just saying it, because I started realizing when you’re verified on Instagram, certain people see it and it stays at the top. So every time I would comment underneath one of my friends posts, it would get thousands of likes, so I said, “Let me keep saying it and let me brand it.” When I started going out, people started saying to me. “Wow, a legend.” This s–t kind of stuck.

You went off to Florida to attend college. What would you say that chapter of your life taught you the most?

Persistence. When I first went out there, my mom moved me to Maitland. That’s like the suburbs of Orlando, so it was really nothing that was going on there. I had to figure out what to do, so I started doing battle rap. I went on Facebook and I was just looking at local events, showcases, barbershop showcases, events at little bars. I started going to those events and everybody was older than me. Everybody was, like, 38 years old. I was like, “You know what? Something tells me there’s a lot more going on in Orlando than what I’m seeing.”

I was attending Full Sail University, so I knew about what was going on there, but there was no culture on that campus. I met this girl through a program I was in called BPA (Business Professionals of America) and she messaged me saying she saw I was in Orlando and she goes to University of Central Florida. I started doing my research and saw it was, like, 30,000 students there, and I was like, “Wait, so I’ve been hanging out with all these old n—as for this long period of time, and it’s a whole other side?”

One day — I was working at Nordstrom at the time and the check didn’t come — I asked my mom to borrow some money. I went to Staples and I got a whole bunch of jewel cases, started cutting inserts out and made a project in one night called College Life. I was using my Twitter and using the hashtags like “#UCF16” and “#UCF17” because that’s what the UCF students would use, and then I’d send them the DatPiff link to the project. I think I had made about 250 CDs. I went to campus, acted like I was a student, and was passing out CDs. When I walked back through campus, all I saw were all my CDs thrown all over the ground.

You gotta understand, I didn’t have money like that. I picked them s–ts back up, and I kind of left it alone. I thought about it and I started realizing the reason why I’m not really rocking with my music is because they don’t know me. I decided what I have to do now is I got to make myself known on the campus. I partnered up with one of the top DJs over there and told him what I wanted to do and how I could help him as well. I just started going to parties, events, live shows and started just doing everything that a college student would do. I was just commuting there every day to make it look like I was really up in there.

I really didn’t have the money like that at the time to be driving there all the time. I ended up just building my relationships with all the students, so eventually everyone thought that I was at UCF. But this whole chapter showed me to be persistent because at the end of the day, if I just gave up and left my CDs on the ground, it just been like, “Damn, they’re not f–king with me,” and quit? But I knew being in everybody’s face, and being like that person who is consistent, people start to catch on that you’re taking this serious.

What would you say has been the pivotal moment so far in your career?

I worked on “Simon Says” for Megan Thee Stallion with this artist named Wolftyla. Juicy J brought us in on the project. Megan ended up cutting the hook, doing her own thing to it, and then the song kind of blew up on her project on Fever. Juicy J produced it and then Juicy J was calling me every day like, “Megan needs stuff. Megan needs stuff.” We were sending ideas and I said, at the end of the day, whatever I could do to help, I’ll help. So he told me that she wanted to do a song with Drake, and Juicy said we just need to come up with a dope idea that would be good for them both. I knew it was going to be hard because Drake is one of those artists that’s impossible to work with or get to.

We had a whole bunch of beats sent over. The beats were OK, but they weren’t strong enough. I got into the studio with this producer named Bone Collector. He pulled up this one beat and I did the “Hot Girl Summer” hook. For that inspiration, a girl I used to deal with was just posting on Instagram and she was constantly like “hot girl summer” and every girl was repeating the “real a– b—h give a f–k ‘bout a n—a” (from “Act Up” by City Girls). So I decided to flip it and make it a n—a perspective.

I sent it back to Juice. I said, “I think this is the one, but I think it’s missing your drums. It’s not ratchet enough.” So I brought Juicy in on production. We ended up giving the hook to Ty Dolla $ign. Gave it back to Megan, and she did her part.

We were about to put it out, but we were like, “It needs something.” Shout out to Murda Beatz. He introduced me to Nicki Minaj. That’s, like, my sis. Me and Nicki started building up our relationship.

At that time, “Hot Girl Summer” was the biggest conversation and it was summertime when I met her. I was telling her about this record Megan got, and Nicki said Megan is dope and that she’d love to work with her. I told her it would be dope if she put a verse on it. I just planted the seed. One night, they were on Instagram Live and Megan asked Nicki to get on the record. It was like, “Let’s do it.” I pulled up on Nicki, she got on the record, and boom — the song came out.

You’ve been in the room with some of the best rising talent. Who are some people you really believe in?

Kiana Lede. I did a lot on Kiana’s new album and I’m excited for people to hear that, for real. I was really excited about Pop Smoke. That’s my dog. My favorite artist is 50 Cent. When I had the opportunity to work with Pop Smoke, I just thought of how Eminem, Scott Storch and Dr. Dre got to work with 50 Cent in that era, I obviously never got the chance to work in that era. I was thinking, now maybe we could create that with Pop Smoke since he reminded me so much of 50. Bringing him into a world where we can make his sound so universal but still New York.