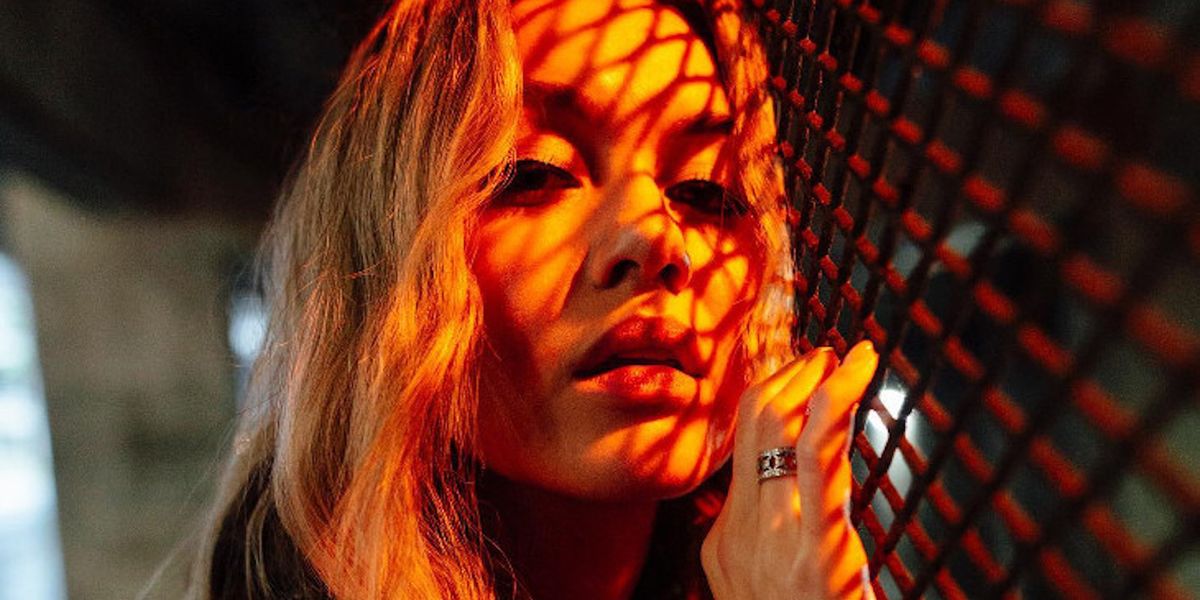 As a former electropop artist who once hit the road with distracting dancers or fading teen idols past their prime time, Toronto singer-songwriter DYLYN grew out of that role during a seemingly extensive effort to transform herself into the fierce and fiery performer she could truly admire and appreciate.

Dark, mysterious and poetic sides to her personality existed from her past, so it wasn’t much of a stretch for the fan of horror films, Arthurian legends, and punk and Guitar Hero bands to step out of the shadows and appear as a rock ‘n’ rule dream queen with a new song called “Find Myself”.

DYLYN, who presents a sneak preview of her new single in the form of a music video premiere today (August 6) at PopMatters, reveals in an email interview for this article that the song she co-wrote with producer Ryan Guldemond last summer in Vancouver, British Columbia, “felt natural and all was flowing — that’s usually the sign you’re finding it.” It took only about 15 minutes to finish after she brought a verse melody into the session.

“At the time, I was really going through a lot of self-discovery both personally and musically,” DYLYN adds. “The lyrics are very reflective of that time in my life.” Afterward, “I went to my Airbnb and listened to the demo all night, and didn’t sleep from excitement.”

Fans of DYLYN (born Gwendolyn Lewis before becoming the artist temporarily known as Guinevere) should also experience thrills and chills while watching this sexy, seductive music video. Then read on to learn more about the bewitching star who rises from a coffin to show off her horror film appreciation in scenes filled with masked creatures, creepy fingers and burning desires. “Find Myself” just might put a spell on you, too.

Shot in late 2019 at various Toronto locations including in the basement of a downtown bar and a forest on the outskirts of the city, the music video became “one big family” collaboration that included DYLYN’s longtime friend Saint, the founder/creative director of Motion 20, along with Virul Media, a digital marketing agency run by her brother Jamie Lewis. “I wrote the treatment with dark forces in mind — a metaphor to the negative thoughts and fear that tend to be roadblocks setting your soul free,” she offers.

“Find Myself” is among the raging new songs set for DYLYN’s next album, Make It Naked, a 2021 EP (Nettwerk Records) with tracks produced by Colin Munroe (Kendrick Lamar, Lights) and Guldemond, the lead singer-guitarist of Vancouver band Mother Mother. It also will include two singles presented in the past few months — “Something to Lose” and “Call Me What You Want” as DYLYN focuses on shifting her music in “a much harder, truer direction” from her Guinevere days.

“My last record (2018 EP Sauvignon and a Kimono) had a lot of ’80s rock, pop, alt influences,” says DYLYN, who will perform the new songs and “heavy versions of some bangers on the last EP” during a 30-minute livestream set with her band at 5:00 pm MDT Friday (7 August) at sidedooraccess.com followed by a Q&A. “This record pushes more into the world of alt rock — darker, harder.”

Therefore, the video displays a darkness that reflects some of the song’s lyrics, delivered by a captivating voice as uninhibited as her stage presence. “My eyes are open wide / But I can’t even see me / I don’t even believe me / Don’t think I even know me / But I know I gotta find myself.“

“Everyone interacts with dark forces in their life, whether it is mental negativity, fear or sadness,” DYLYN explains. “The creatures are a metaphor of things that have followed me around, and have stopped me from being myself. The bridge depicts the all-realizing ‘burn it all and let go’ moment — I was there all along and it’s about shifting your perspective and being true to yourself.”

DYLYN long ago became a scary movies fan whose favorites include 2001’s Jeepers Creepers and France’s High Tension in 2003 (“I remember being terrified after watching those,” she discloses). “Growing up, I was always the first one to pick the scariest movie,” she recalls. “There’s a thrill with being on the edge while watching a film … waiting for that scary presence to pass the screen. It all came together quite naturally [for the video].”

She also relied on references from Season 1 of American Horror Story and was influenced by Kanye West’s visuals in “Monster”, saying, “I loved the slow movements — makes it extra creepy.”

Other elements of her video helped raise the fear factor, though. “I remember listening to the song and feeling this dark creepiness to the record,” DYLYN shares. “I really wanted to weave the worlds together. It was a little unsettling building and laying in a coffin.“

There also were some challenging aspects to jumping into that genre. “When you dabble in horror, I’m a big believer of subtleties — catching a small movement in the background,” DYLYN states. “I actually made the masks on the creatures and really wanted to make sure they felt like shadows; it was hard to light them without capturing the fabric of the suits they were in.”

Escaping her past might not be as horrifying as the films watched by a one-time pop princess who covered Bon Jovi (“Livin’ on a Prayer”), idolized Jimi Hendrix, and played ice hockey and video games. Raised by a Chinese-British Canadian family in a suburb north of Toronto, she dug her dad’s collection of ’70s records, rocking out to bands such as Blondie, Led Zeppelin, and Pink Floyd.

Her Guinevere persona was just a brief departure as an interest in tales of the Middle Ages led to a stage name that ultimately had its drawbacks. “Try spelling it, try pronouncing it — it’s a tough one to remember,” she surmises. “It is very close to my real name, Gwendolyn. That’s where DYLYN made its appearance — half Gwen, half DYLYN.”

If there was an actual birth date for the artist who simply wanted to go “back to my roots,” it likely happened on 21 March 2016, in a cryptic three-word message in all caps on Gwendolyn Lewis’ Facebook page: CALL ME DYLYN. It has become her handle on all things social media.

Her act and personality changed along with the name as Sauvignon and a Kimono marked DYLYN’s recording debut, while T-shirts recognizing heavy metal bands such as Metallica, Black Sabbath and Queens of the Stone Age became part of her on-stage attire. “Gwendolyn is a much more reserved person,” she realizes today. “DYLYN is much more in your face — turn the dial to 11, head bang, scream.”

The result has been more than 130 million worldwide streams and a legion of fans from the anime community who design their own video characters (even a DYLYN avatar has been created). They managed to connect through a “Secret” message in that 2018 breakout track, a personal account of a child affected by her parents’ divorce.

Where she’ll arrive on this latest journey remains to be seen, but DYLYN appears to be heading down the right path. “I believe we as humans continue to shift, grow and evolve,” she contends. “I will say I’m much more comfortable with being the girl in a band T-shirt and Chucks. It excites me to dig deeper, the search never stops.” Seek and ye shall find DYLYN finally making a name for herself.

Look inside her cool toolkit: “I know my way around a hammer and drill. I build all of my props on my sets and write all my video treatments. Oh, and as a proud Canadian, I play ice hockey.”

Tales from the deep: “My secrets are revealed in my poetry, my music, and my lyrics. I believe it has to be let out into the world, there’s no need to hold on to it. I wish I could give you the juice but you’ll have to wait until the rest of my songs come out!”

Now and then: “I’m currently living in downtown Toronto with my brother. We moved into a spot at the beginning of the year. You can find ’70s rock records on the wall and the odd Star Wars reference. I went to school in the suburbs of Toronto [including Langstaff Secondary School] and am fluent in French. Currently single :)”

Banding together: Introducing her playing partners for the livestream performance — Kairon Haynes (drums), Ben Healey (guitars) and Stacey Shopsowitz (bass) — DYLYN says, “My band members are incredible! I love those boys. Kairon is a beast, he hits the drums so hard and always has a smile on his face. My favorite thing about [Ben] is his movie quotes about Spinal Tap (he plays the same guitar in the movie). Stacey always has the funniest shirts, and a serious love for BBQ. Lucky to be surrounded by such loving, incredible musicians.”

While waiting for Make It Naked: “I am so excited to release it [in 2021]; looks like we’ll be dropping a record every six to eight weeks. The next few months is about filming videos with the songs and working on the next album. I love what I do.”