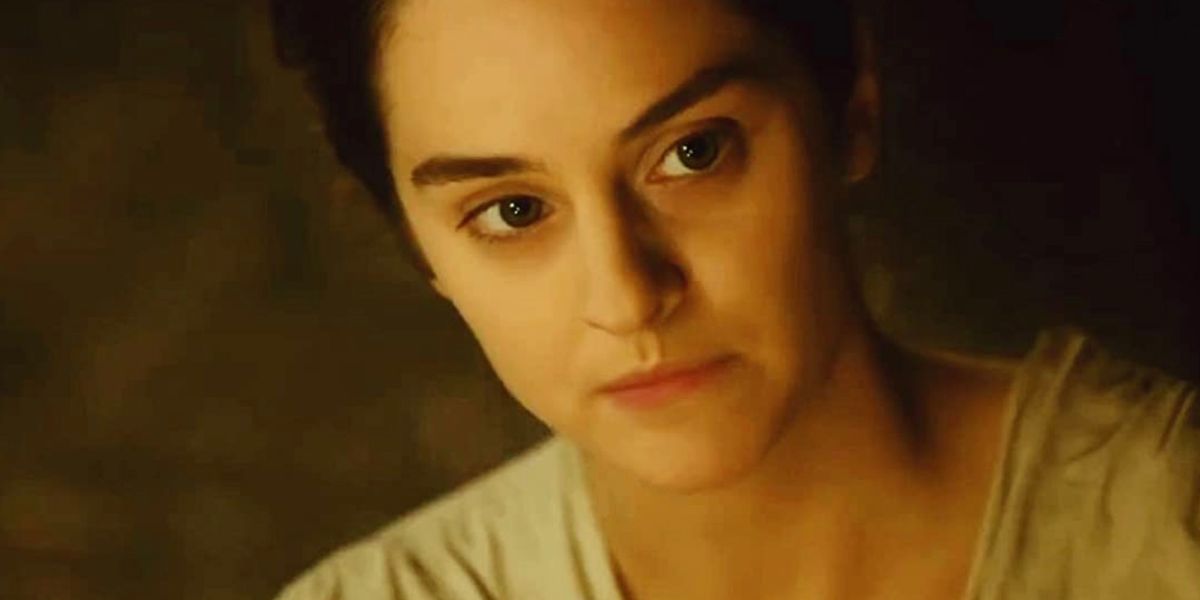 The title of Céline Sciamma’s Portrait of a Lady on Fire (Portrait de la jeune fille en feu) has several pertinent meanings depending on the angle from which one observes it. Its most basic is as a reference to an object within the film itself, a painting created for the movie which shares its title. The painting upends the unambiguous descriptive nature of its title: it’s less of a portrait and more of a landscape, not straightforward but mysterious and surreal, portraying a barren, moonlit field upon which a woman, back turned, stands plaintively as flames engulf the hem of her dress.

Then there is a moment in the film when a painter, frustrated with how her work has failed to capture the essence of her subject, burns her portrait in a fireplace. Finally, the movie’s title refers to itself, a filmic portrait of a woman who, at one point, indeed literally catches fire—a moment which inspires the creation of the titular painting, of the same woman rendered in the portrait which the artist casts into the fire.

These meanings converge into each other here, in a film about creative disruption and invention, about seeing the world with the gaze of a woman and an artist, about the salvation of sisterhood in the blazing storm of an inexorably masculine society.
Portrait of a Lady on Fire yearns to burn tyrannical gendered tradition to ash and remake it into something collaborative and egalitarian, to create a world in which humanity is liberated from the repressive hierarchies of remote civilizations. It’s about putting flame to those defective histories and sketching something altogether new.

The film is set in the 18th century on a small, isolated island in Brittany, France. Marianne (Noémie Merlant) is hired by a countess (Valeria Golino) to paint a wedding portrait of her daughter Héloïse (Adèle Haenel) in their secluded château. Because Héloïse rejects her marriage, Marianne is forced to paint in secret, to study Héloïse’s face on brief outings to the island cliffs and beaches and surreptitiously render those memories onto the canvas when she’s alone. But as they observe one another on their walks, Marianne and Héloïse fall into a quiet, romantic fascination with each other that escalates into a profound intimacy untouchable by their external obligations. Though the painful reality of Héloïse’s inevitable wedding presses closer, they build a shared relationship that transcends their roles as women, as lovers, and, importantly, as artist and muse. As Héloïse explains to Marianne about the process of modelling for her, “When you’re observing me, who do you think I’m observing?”

Portrait of a Lady on Fire is romance depicted as it should be in cinema: through gesture and expression. The world of the film is elegant but sparse—not overdressed, exaggerated, or garishly opulent as so many period romances are—which leaves the spectacle and pageantry of the drama to rest solely on the shoulders of the actresses. Merlant, in an air of dignity that shrouds an earnest enthusiasm, aches quietly as Haenel, all piercing eyes and sideways smirks, burns in enigmatic angst and restless playfulness. Together in their difference, they thrive in dynamic tension, smoldering with defiant passion and desire in hushed textures. It is from the dance of their reactive counterbalance to each other that the impact of the film is driven.

Fundamentally, Portrait of a Lady on Fire is about the potentialities soaring beyond the traditional constructs and established virtues inherited from generations of stagnant and oppressive social doctrine. Its subjects are sex and sexuality, creativity and creation, love and community. It asks: What is femininity in isolation? What is womanhood when it exceeds the borders of its socially-ordained limits? It answers with a fleeting, serene beauty that unclothes the sublime self-actualization that’s possible when women become invisible from the limiting factors—judgment, insecurity, objectification—of the patriarchal gaze. It puts women, and the experience of being a woman, on an island alone to thrive and evolve.

Of course, it isn’t all so perfect at first. Marianne (Noémie Merlant) initially paints Héloïse (Adèle Haenel) through eyes that have been groomed by a society that celebrates and participates in the institution of chattel marriage; she is commissioned to paint a wedding portrait, so she naturally adopts the gaze of her subject’s soon-to-be husband. The results, she finds, bear little resemblance to Héloïse, both because they lack the character of Héloïse’s true self and because Marianne is merely performing from the artificial perspective of women in a male-dominated culture. She utilizes a gaze that disassembles the very being of women and transforms subject into object.

It means everything when Héloïse tells Marianne of her first portrait, “The fact it isn’t close to me, that I can understand. But I find it sad it isn’t close to you.” Only when Héloïse steps to the other side of the canvas—thereby embracing a more equal partnership and vision with Marianne—do the results satisfy. Together, liberated from the conditions mandated by the authorities of the patriarchy, they find that they can create art that embodies an essential piece of each of them. But of course, in this world, in its perpetual state of stratified antagonism, such clarity arrived at from outside the grasp of convention and competition can only last a moment.

It’s fitting, then, that in Portrait of a Lady on Fire, male power constantly pressures the frame. The entirety of the conflict is rooted in it. The presence of men bookends the film, at both points prompting uncomfortable, cloistered behavior from the women. Héloïse’s unwanted marriage threatens the tranquility of her transcendent bond with Marianne, just as it taints Marianne’s artistic vision.

That struggle is further reinforced by the introduction of Sophie (Luàna Bajrami), a young maid at the château who discovers she’s pregnant and recruits Marianne and Héloïse’s help in arranging an abortion. Though they establish a kind of temporary utopia of feminine solidarity together, the destructive influence of male chauvinism is never far from view; the feminine is always silhouetted in the masculine.

Masculine power deploys projections of the feminine ideal—a male-centered formulation of womanhood—and claims ownership not only of the choices, bodies, and humanity of women but of the very conception of femininity itself. Women are forced to envision themselves within that affected femininity, to perform in a disguise designed by male desire. It is insisted that they marry men and mother babies, supplant their desires with those of their husband and children, and give their life to the mythological promise of domestic satisfaction. In a culture that relentlessly preaches the concept of feminine inferiority, the kind of emancipated beauty and love exhibited by Héloïse and Marianne’s secret revolution can never last.

And yet there is real and substantial optimism to Sciamma’s film. It advocates for social innovation, transformation, and recognition of the fact that it’s not so transgressive to love without gauging profits and expenses, to create without reflecting traditional ideals, or to look with eyes from outside the horizon of customary acceptability. As its characters abandon the gaze, reject the frame, and unlearn the roles those in power urge them to play, Portrait of a Lady on Fire encourages a dismantling of the order of social stratification that binds human potential.

With its open heart, the film silently reaches beyond the structures of sex and gender to reject all forms of prejudice and injustice, stretching out to the oppressed in all their variety and seeking to form a greater communal, cooperative society. More pertinently, the film asserts that any progress made toward that endeavor is well worth holding onto—even if it doesn’t last.

The Criterion Collection’s Blu-ray edition of Portrait of a Lady on Fire comes with only four supplemental features, all of them interviews. That may seem disappointingly thin on paper (at least by Criterion standards), but in actuality it’s an insightful and concise assortment of special material without any real filler.

Two of the interviews were produced by Criterion specifically for this release. In the first, a 30-minute conversation with critic Dana Stevens, Sciamma speaks to the film’s costume and production design, location scouting, casting, cinematography, blocking, music, and writing, the movie’s place in her filmography relative to her earlier films, and the complicated nature of labels like “political” and “feminist” cinema.

Another new interview with Haenel and Merlant (recorded separately) addresses the unique dynamic between the actresses and the director. Merlant discusses the difficulty of manifesting the “painter’s gaze” in her performance. Haenel talks about the film’s transformative take on a period romance, and both discuss the movie’s political implications and its unconventional portrayal of sex.

The other two interviews are shorter and somewhat less substantial, both recorded in 2019. The most compelling of the two focuses on Hélène Delmaire, the artist who created the paintings for the film, who details her experience working on set, including the process of emulating the technique and style of 18th century painters and the unique challenges of painting while being filmed. Cinematographer Claire Mathon provides technical details on the film’s lighting, camera, and lenses and explains the decision to shoot the film digitally in an interview recorded during the 2019 Cannes Film Festival.

Taken in totality, the four interviews offer both an in-depth analysis of the thematic content of the film and an informative look behind the scenes of its production. The cover of Criterion’s release also sports bold new art by Delmaire, and the booklet contains a new essay from critic Ela Bittencourt.