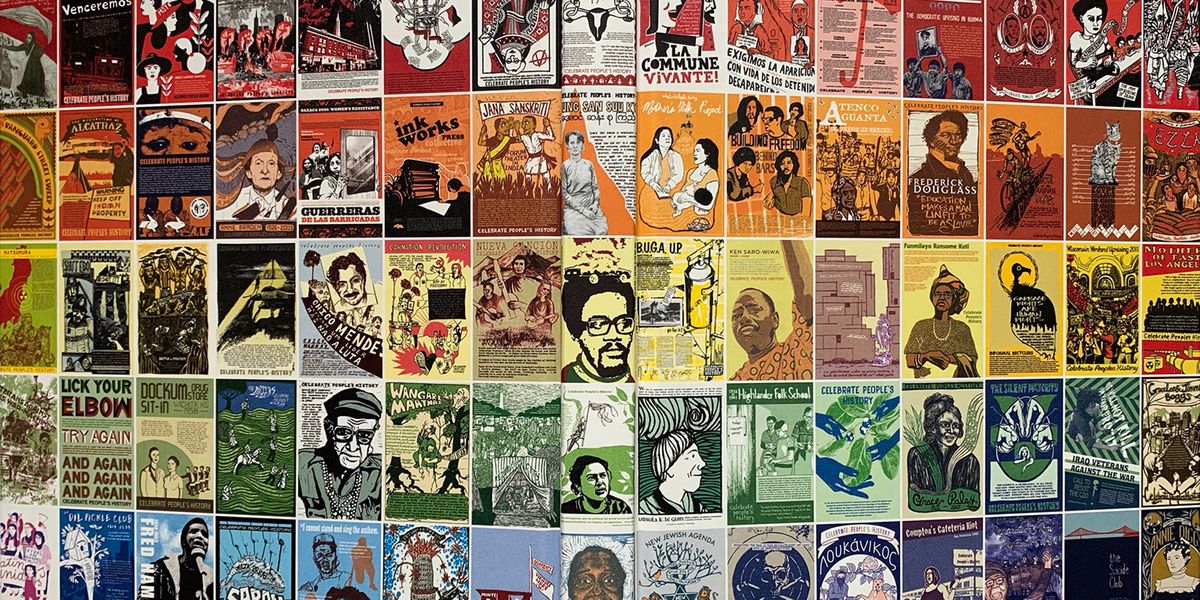 The ‘people’s history’ approach to thinking about and interpreting the past has gained momentum over the last few decades. From Howard Zinn’s indispensable A People’s History of the United States in 1980 to the ReVisioning History series from Beacon Press over the last decade, there has been a welcome shift away from rote memorization of presidents, dates, and patriotic dogma. By building connections from the past to the present and tying individual stories to enduring sociopolitical realities, students of history can begin to think of themselves, their families, and their communities as historical actors. The people’s history movement gains a new visual identity through Celebrate People’s History!: The Poster Book of Resistance and Revolution, 2nd Edition, the brainchild of Brooklyn-based artist and archivist Josh MacPhee and the Justseeds Artists’ Cooperative.

What started as a midnight undertaking to paste posters of Malcolm X in West Side Chicago in 1998 has turned into an international consciousness-building artistic project. The first edition, released a decade ago, was much slimmer, but the groundwork was set for increased participation in the project and its revolutionary ethos.

The second edition contains nearly 250 posters stretching from the
Secession of the Plebs in the Roman Empire during the Fifth Century BCE to the recent toppling of white supremacist statues in the United States. All of these posters have the potential to spark a transformational learning journey. At the very least, readers will come away with the names of more than 100 socially engaged artists and illustrators to keep an eye out for at galleries, bookstores, and on the streets.

The posters eschew traditional political leaders and, instead, center activists, organizers, and other people that just got fed up with the status quo. In some cases, the movements succeeded against impossible odds. In others, the pushback was too powerful at the time, but a spark remains to galvanize those that preserve and honor the memory of the fight.

A color-code system helps identify larger themes of resistance. Readers see the shifting challenges that feminist, labor and national liberation movements (sky blue, coral pink, and peach yellow, respectively) confronted to create a more just society. For instance, the poster commemorating the victims and survivors of the Indian Industrial Native School in Haskell Oklahoma by Lawrence-based artist Lana Grove sits at the intersection of education, culture, and indigenous resistance. The struggle to protect Chicano Park in San Diego by Boyle Heights-based artist Alfonso Aceves is marked with the same colors. Themes remain consistent across borders and eras, much like the struggles of working-class and oppressed people.

Some of the most compelling posters come from distant settings that do not immediately come to mind when thinking of radical movements. A poster from quilter and educator NedRa Bonds highlights how the Black Panther Party was not only active in Oakland, Chicago, and New York City; the revolutionary Black power organization also had a chapter in her hometown of Kansas City. Illustrator and academic John Jennings, who contributed several posters to the project, highlights how “Sarah White, an African-American, thirty-one year old single mother, organized a historic and successful labor strike composed of Black female catfish factory workers” (as described in the poster) in the Mississippi Delta, the region of the United States that’s possibly the most resistant to social change.

The portrayal of people working together to transform their communities is a challenge to the popular perception that movements inherently must come from ‘liberal’ metropolises, and that anyone with the misfortune of being born elsewhere must migrate in order to have any impact. This type of thinking may be the perfect antidote to the blue/red state and rural/urban dynamics that restricts conversations about power and exploitation in the aftermath of every presidential election.

Black Lives Matter organizer and author Charlene Carruthers. in one of the book’s introductions, says, “Incomplete stories lead to incomplete solutions.” Fighting back against the incomplete stories, one of which being that presidents and lavishly funded nonprofit leaders alone create change, is an important step in exposing larger truths that have been obscured by placing the onus for social injustice on individual shortcomings. In this righteous effort, a poster is worth a thousand words.

The second edition of Celebrate People’s History is the perfect coffee-table book for the radical home. Every flip through reveals a new struggle against power and wipes away the illusion that how the world now is how it always has been and always will be. People have power; all they have to do is believe it.