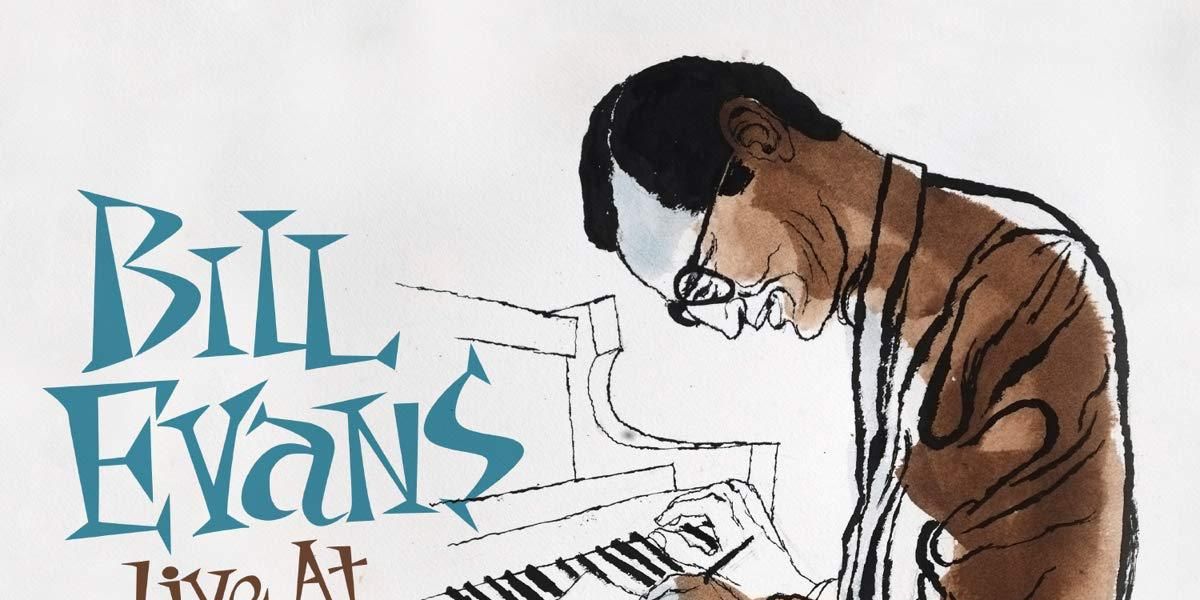 Pianist Bill Evans stands today as one of the two most influential jazz musicians on his instrument after Bud Powell. McCoy Tyner is the other towering figure from the 1960s and 1970s, and it is easy to think of them as at different poles. Evans was lyrical and favored harmonies drawn from the classical Impressionists, applying them to ballads that he made shimmer. Tyner was percussive, crashing fourths with his left and creating cascades of notes with his right.

But, of course, neither of those descriptions captures these superb artists in whole. Tyner could be a subtly lyrical player, who applied a delicate right hand to ballads. And Evans was intense as an uptempo pianist, frequently engaging in furious rhythmic dialog with his trio-mates. The release of home recordings made by drummer Jack DeJohnette of the Evans Trio live in London at Ronnie Scott’s affirms the latter with an exclamation point.

Recorded in July of 1968 during a month-long residency at the club, these (mid-level fidelity) recordings catch this particular trio in the middle of the six months it existed. DeJohnette had been playing with Charles Lloyd and would soon be playing in Miles Davis’ fire-fueled late 1960s quintet with Chick Corea, Dave Holland, and Wayne Shorter. Perhaps a stint with Evans sounds a bit tame for a drummer who was transitioning from a zeitgeist-capturing quartet that melded Coltrane and the ’60s rock impulse to Miles Davis, but there is no lack of adventure in these recordings.

The program is made up of 20 performances of 18 different tunes, including most of the ones that Evans favored during this time, including the standards “Yesterdays”, “Embraceable You”, “Stella by Starlight”, “Autumn Leaves” and “Emily”, and originals “Waltz for Debby” and “Very Early”. In a sense, this is “just another” Bill Evans live date—you know the tunes, the arrangements (mostly), the aesthetic. But, in fact, this trio with DeJohnette does sound different in notable ways. And, well, this trio was shot through with invention even when they were playing the usual tunes in standard forms.

In the canon of overplayed standards, “Autumn Leaves” is right up here, but this trio plays it differently. A stride-ish piano opening leads to Gomez playing the first phrase of the melody on bass, after which Evans carries it for the remainder of one uptempo chorus, though the trio has a specific set of syncopated lines they play together as melodic embellishment around the theme. Before you know it, Gomez takes an unaccompanied solo that is virtuosic in the extreme, interweaving quotes from the melody with plucked double-stops, passages of at-tempo walking 4/4, and then out-of-tempo bursts that veer toward the avant-garde. DeJohnette reenters when Evans solos, making this section like a swordfight, as rhythmic clashes and flashes whiz about before the positively Art Tatum-esque melody arrangement returns. I’ve never heard the tune played with this kind of playful daring.

Similarly, “A Sleepin’ Bee” contains several carefully written counter-melodies in the head arrangement, with Gomez and Evans coming together to play quick counterpoint runs and the band hitting rhythmic figures perfectly together. Then, as Evens launches his solo, DeJohnette repeats a suspended triplet figure that had ended the arrangement, generating a strange, dislocating sense of polyrhythm. For just a moment, the elegant Bill Evans trio sounds like it is flirting with some out-there, “new thing” jazz before all three members of the band catch each other and fly forward swinging . . . only to incorporate yet another shot of syncopated precision arrangement early in the piano solo.

While DeJohnette may be the X factor on many tracks, it is impossible to hear Eddie Gomez as anything less than the band’s second star. Gomez had played with Evans for a couple of years by 1968 (and would stay in the trio until 1977), but he already sounds essential in every sense. The wonderful rendition of “Spring is Here” is a ballad that provides a conventional “solo” only for the piano, but the whole concept of the trio here is unthinkable without Gomez’s extraordinary accompaniment. He moves through the tune in lopes and flurries, inventing brilliant counterlines that surge into the foreground even as they support Evans. The push-pull feeling of this playing is always present in Evans’s playing as well—they lay back, then they play in wonderful swinging rushes. (In an interview in the liner notes between DeJohnette and pianist Chick Corea, the drummer notes that this dynamic tended to increase the tempo of the performances from beginning to end—but that it was understood as part of the art of this band.)

“Embraceable You” gives the melody to Gomez from the start, and he plays it with extraordinary freedom—the tune, yes, but with rippling asides—before the swing kicks in. Then he takes the written tune again over tempo as if he were a great saxophonist. His improvisation accompanied by DeJohnette’s brushes against snare dazzles in doubletime. Even better, if less flashy, is the bassist’s performance on an uptempo “Waltz for Debby”. During the 3/4 section Gomez plays beautifully composed lines, and then once the rhythm moves into common time, he and Evans are locked in on a set of small arrangement-bits that make the group sound not unlike the old Nat Cole trio—the one with guitarist. Because Gomez is just that fleet. No surprise that the leader gives his bassist the lead-off solo on this one—and the tune becomes a charming cooker.

Another waltz on the program is, of course, “Someday My Prince Will Come”, which the band plays throughout in 3/4. Almost all the performances clock in around five minutes or even less, but this uptempo number stretches past six, giving solos to Evans and Gomez and then going on to trading fours with DeJohnette, who demonstrates the difference he was making. It’s not that he is not subtle when subtle is called for on these dates, but his break on this “Prince” are actually explosive. And then as quick as can be he pulls back. The other longer track is “Round Midnight”, on which DeJohnette sounds very much like he has been listening to Tony Williams—the drummer he would replace in Miles Davis’s group—with cymbal prattling that creates new kinds of cross-rhythms for Evans to deal with.

But what of the pianism? After all, Bill Evans was known for solo playing and a dreamy lyricism. It is here, yes, but in smaller quantities than Evans’s usual reputation suggests. “Quiet Now” begins and ends with generous piano-only readings, freeing Evans to play rubato but also to modulate the tune as he feels it. A wonderful version of the Burt Bacharach tune “Alfie” (a pop hit in 1966 and 1967—sung by Cher in the film of the same name and then covered by Dionne Warwick) is given a hushed reading that amounts to an Evans/Gomez duet for the first 2:30, and it produces my favorite piano solo of the session. The bulk of the solo finds Evans using a nearly “locked hand” approach, with his right-hand melody pushed by parallel block chords in the left hand. It does not upend our understanding of Evans, but it makes clearer than most recordings that his impressionistic approach was also muscular and dramatic.