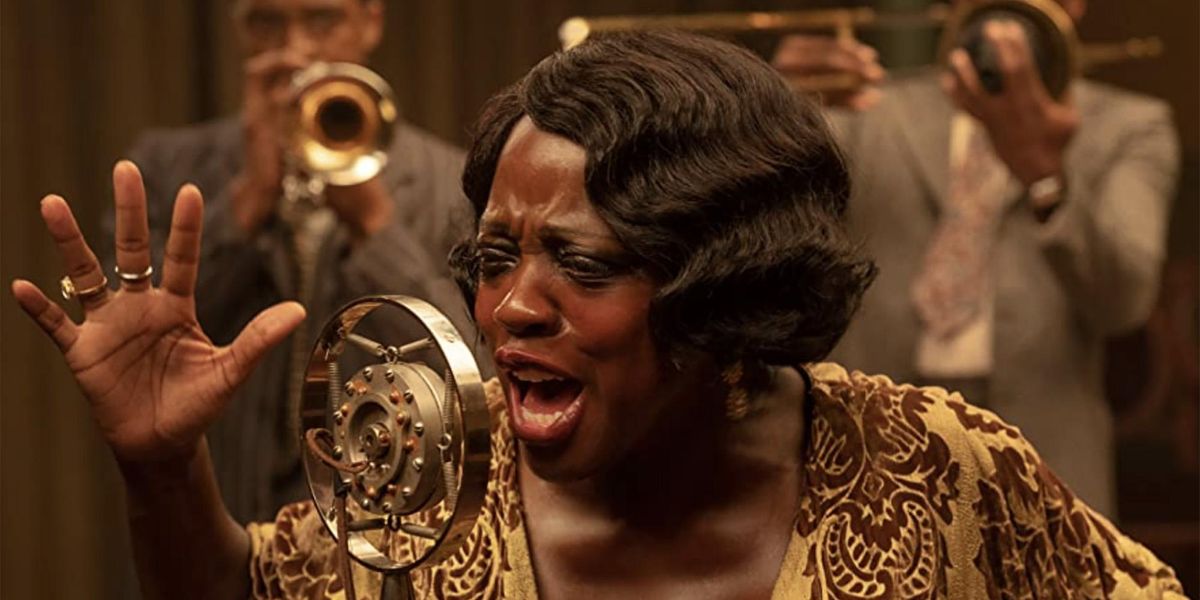 George C. Wolfe’s direction of Ma Rainey’s Black Bottom, like Denzel Washington’s direction of 2016’s Fences, adheres to the theatricality of August Wilson’s script, propelled by minimal set variations and the characters’ maximal backstories and dialog. The film’s focus is panoramic, at once a portrait of Ma Rainey and a study of the other characters; Chadwick Boseman’s Levee Green, who emerges as the most palpable protagonist, claiming the emotional heart of the project. The film is also an homage to the blues and the technological developments of the 1920s, various shots of machinery and mechanical processes used during a featured recording session providing some of the film’s most arresting images.

Viola Davis stars as Ma Rainey, alternately hypnotic and frightening, face shimmering with fatigue and indomitability. Fans of Rainey’s music, and/or those who have researched her biography, will likely bring various impressions to the viewing experience; those unfamiliar with her life, or her substantial role in the evolution of popular music, needn’t worry. Davis’ Rainey is immediately getatable, an instinctively independent and boldly expressive and strikingly au courant Black woman and artist, circa the mid-1920s who comes to life when performing or flirting with Taylour Paige’s Dussie Mae, with whom she has a somewhat one-sided affair.

A more tender side of Rainey is revealed when she interacts with her nephew Sylvester (Dusan Brown), whom she is determined to include in the recording process despite the fact that he stutters. The rest of the time, navigating the members of her supporting band, her white manager Irvin (Jeremy Shamos), and her white record producer Sturdyvant (Jonny Coyne), she unwaveringly stands her ground on a litany of aesthetic and contractual issues. Rainey refuses to be manipulated or exploited, protecting her talent and employing what leverage she has to advance some semblance of racial equality and justice.

The film is mostly split between scenes of a recording session and scenes of the band (sans Rainey) conversing in a basement rehearsal space. Boseman’s Levee steals the stage, due to him being the most effusive character in the mix, by turns charismatic and sinister, captivatingly relating the story of his mother’s brutal rape by several white men, and how his father partially avenged her assault before he was savagely murdered. The event was clearly a pivotal rupture in the young Levee’s psychic and egoic development and is the film’s energetic axis.

Complementarily, the conflict, overt and simmering, between Rainey and Levee serves as the springboard of the narrative (he is envious of Rainey’s status and believes himself to be musically superior to Rainey and his bandmates. Plus, he is competing with Rainey for Dussie Mae’s affection). Toward the end of the film, Levee’s rejection by the white music producer, who reneges on a verbal agreement, primes him for the film’s violent crescendo–a masterfully rendered energetic and narrative confluence–Wilson’s illustration of the cyclicality of violence and oppression, how trauma is rarely transmuted, a destructive inheritance passed from generation to generation.

In Enneagram terms, Rainey is a Type 8 (the boss, protector, warrior), propelled to be dominant rather than dominated; predictably, this renders her an outsider of sorts. With the exception of a scene in which she romances Dussie Mae and another in which she transcendently poeticizes for Colman Domingo’s Cutler the magical nature of the blues, Davis’ Rainey is relationally guarded, defended, restrained, even simmeringly introverted. Because she is essentially a centripetal character until provoked, at which point she becomes fiercely centrifugal, she is one of the less organic yet more volatile characters in the film. That these subtle and very real tensions are made accessible to a viewer is a testament to Wilson’s agility as a playwright and Davis’ dynamism as an actor.

Wilson’s text, as finessed and contemporized by Ruben Santiago-Hudson’s screenplay, is overtly a manifesto regarding the historical subjugation of Black individuals and Black culture in America, existentially, economically, and artistically (the closing scenes, in which an all-white band performs Levee’s song while Coyne’s chicanerous producer records the track, are devastating). In addition, the play explores the value of comradery and how that comradery can turn brutal when intimacy leads to the offense; e.g., Levee’s final act of violence triggered by Toledo (Glynn Turman), who inadvertently scuffs one of Levee’s new shoes (which represented, for Levee, his movement toward personal and artistic autonomy, a possibility nullified literally by “the rejection” and symbolically by “the scuff”).

By this time, Wilson’s characters, distinct as they are, besiege the viewer’s mind as metaphors, mythic exemplars of a disturbing legacy America seems unable or unwilling to address. One is left with a vision of suffering personified, how beauty and horror seem inseparable, the one a response to the other, ad infinitum.