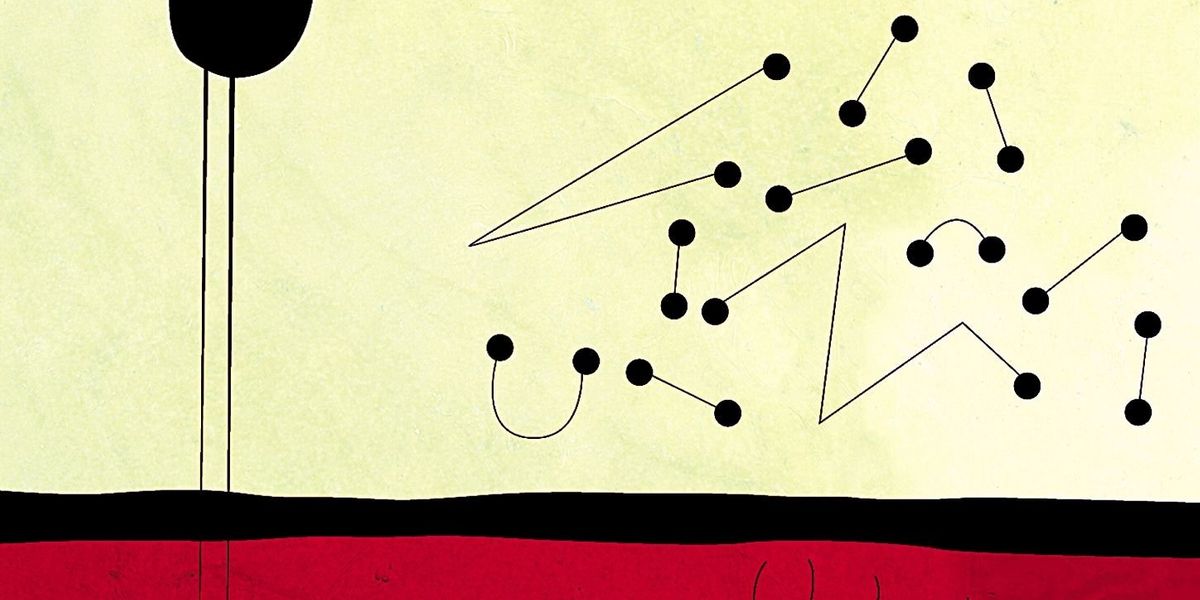 “Too Little Too Late”

Maroon kicks off with one of the best power-pop songs the band ever wrote, “Too Little Too Late”. It has a simple but catchy guitar riff, a powerful lead vocal from Steven Page, and a strong driving beat from drummer Tyler Stewart. The chorus, buttressed by handclaps and high harmonies, is an easy and fun sing-along. The song also has a unique musical construction: the first verse goes right into the chorus, while the second verse pushes into a bridge before hitting the chorus. The third verse again goes into the bridge, but adds yet another section, cresting before crashing back into the chorus a couple more times. With any justice, this—the album’s third single—would’ve been a huge hit; sadly, though, awesome power-pop tracks don’t always catch on with the general public.

For a band who built their reputation on being goofy, Barenaked Ladies could get surprisingly serious and wistful. “Never Do Anything”, on the other hand, leans into all the stereotypes that caused the band to become fodder for jokes in the 2000s. It’s a bright and silly pop song with lyrics that are essentially stream-of-consciousness. Keyboardist Kevin Hearn’s organ burbles give this song its hook, while the bridge—with Page speak-singing, “If I were the king”—sounds a bit embarrassing in 2020. At least it’s a relatively short part of the track.

Maroon’s lead single, “Pinch Me”, went on to become the band’s second-biggest hit. It peaked at #15 on the Billboard chart, undoubtedly in part due to its superficial resemblance to “One Week”. Ed Robertson takes lead vocals on this song (as he did on “One Week”), which successfully combines Robertson’s singsongy rapping with the band’s more wistful side. “One Week” introduced that style in the studio, but Robertson had been doing it throughout the ’90s via the band’s silly improv bits during their live shows.

Here, Barenaked Ladies go quiet, with acoustic guitars, soft electric piano, and a simple drum loop from Stewart. It’s a laid-back song that hearkens back to lazy suburban summers, but Robertson’s fast, pseudo-rapped chorus keeps it from sliding into folky Jack Johnson territory. The song also features a distinctive closing guitar solo, where the guitar is played in reverse from how it was recorded. Overall, the song nicely combines the band’s silly and more reflective sensibilities, with lines like, “Put the sprinkler on the lawn / And run through with my clothing on” sitting alongside “I could hide out under there / I just made you say underwear!”

The bouncy “Go Home” is a fun song about being in love and suffering from heartache, but its emotional content is surprisingly strong. A shuffling beat from Stewart and some subtle but welcome glockenspiel accents from bassist Jim Creegan drive the track, but Page’s heartfelt vocal delivery truly sells it. He really sounds like he’s delivering advice to a good friend in the refrain: “If you need her / You should be there / Go home.” The bridge works the best, when he sings, “If you’re lucky to be one of the few / To find somebody who can tolerate you / Then I shouldn’t have to tell you again / Just pack your bags and get yourself on a plane” (Canadian rhyme right there), as well as his final tag, “Come on, man! / You should be there.” It surprised me this week by becoming my third-favorite Maroon track as far as emotional responses go (more on those other two later).

“Falling for the First Time”

Maroon’s second single didn’t make any real impact on radio, although it charted at #11 on Billboard‘s Adult Top 40, which was an indication that the band’s mainstream success had peaked and was already trending towards being considered dad-rock. The song itself is an upbeat, fast track with self-deprecating lyrics about crises of confidence. It’s pretty standard for Barenaked Ladies, with catchy music and lyrics that are wry without being outright funny. It’s also the only song on Maroon besides “Pinch Me” with Robertson on lead vocals, which says a lot about how Reprise Records had decided to market the band. Despite Page being the band’s clear lead singer and Robertson taking over for just a handful of songs per album, a listen to just the singles gives the exact opposite impression.

At this point, Maroon enters its indulgent section, where Page turns up the drama and the band stretches a bit to accommodate him. “Conventioneers” is a relaxed song that tells a sequential story about co-workers having a fling at a convention. It’s romantic soft rock with tiny R&B influences, and that makes it a step or two removed from the band’s previous ballads. The best part of the song is that Page continues the story post-fling, discussing how awkward their interactions become the next week at work since the pair have no intention of having a romantic relationship. The song ends with a punchline, “It’d be great / If you transferred out of state”, as Page’s protagonist would rather not deal with the situation at all.

This song takes advantage of Page’s theater-ready voice to tell the tale of an actor looking for his big break. Martial snare drumming, orchestral percussion, Creegan’s bowed upright bass, and Hearn’s harp patch add to the theatrical quality of the song. Robertson also sings low harmony throughout the track, giving Page’s already strong singing even more body. Our hero progresses from Broadway to a failed television pilot to commercials, eventually landing as the star of big budget summer blockbusters with offensive foreign stereotypes. This is intentionally sardonic of Barenaked Ladies, not an example of 20-year old racism. It’s a fun song, but for something that seems intended to comment on the soullessness of Hollywood, Page’s message ends up pretty muddled.

“Humor of the Situation”

Along with “Go Home”, the fast, wacky-sounding “Humor of the Situation” probably grew the most in my estimation over this past week. It’s a power-pop song with a catchy synth riff, driving drums, and a strong chorus. Lyrically, it starts with a protagonist being an asshole to a co-worker, talking trash until that person shows up and then pretending he was laughing about something else. After that first verse, the chorus admonishes the co-worker to “Enjoy the humor of the situation”. But, in the second verse, the protagonist returns home to find his significant other has “arranged all my possessions on the lawn”.

In the third verse, he ends up naked and wet as neighbors get in on the humiliation, probably taking things too far. The second half of the song also includes a simple addition to the chorus that’s a diabolical earworm. At this point, “Come on, now now / Come on now now / Enjoy the humor of the situation” features Robertson on backing vocals singing “Now” along with every second instance of the word. It’s the primary thing I remembered about this song before starting to revisit it.

“Baby Seat” is a mid-tempo song with lyrics about growing up and taking responsibility for one’s actions. It’s… fine. Page gives it his all on the chorus, and there’s a little guitar and organ trill thing that Robertson and Hearn do that’s pretty cool. Other than that, though, there isn’t a whole lot that makes this particular song distinctive. I do like this line near the end of the song: “If you think growing up is tough / Then you’re just not grown up enough, baby”.

This song is also mid-tempo with lyrics about taking responsibility. Stewart is playing distinctive 808 electronic drums for part of the song, which gives it a different feel. There are also subtle piano, synth, and guitar parts that give the piece a bit of body. Lyrically, it’s about a woman who always lets her cheating boyfriend off the hook for his actions. Page insists in the chorus that she is fed up enough to leave him, but the verses seem to suggest otherwise. Barenaked Ladies leave it ambiguous as to whether this will actually happen, but that tension makes for a memorable song and I like it better than “Baby Seat”.

Now we get to the strong, emotional ending of Maroon. These last two songs (this one and “Tonight Is the Night I Fell Asleep at the Wheel”) are as indulgent as “Conventioneers” and “Sell Sell Sell”; however, their premises are much more effective. Specifically, “Helicopters” is a song that feels autobiographical (although it apparently isn’t). It’s also a great pop song, with a great melody in the verses, an excellent pre-chorus, and a powerful chorus. Page sings about a musician taking a trip to a war zone, presumably on a USO-style appearance for the troops, although that isn’t specifically articulated in the lyrics.

Those lyrics, however, are vivid and emotional: “This is where my life changed in a day / And then changed back”; “It’s hard to sympathize with all this devastation / Hopping ’round from site to site like tourists on vacation”; and “I can’t help anyone / ‘Cause everyone’s so cold / And everyone’s so skeptical / Of everything they’re told.” Plus, the chorus is simple and stark: “I’ll be leaving soon.” That chorus is reinforced by the unusual appearance of timbales, as Stewart pounds the hell out of the large, echoing Latin drums. This is my favorite song on the album, combining impactful lyrics with big hooks and passionate playing.

“Tonight Is the Night I Fell Asleep at the Wheel”

A slow, carnival-like waltz opens this song, making it sound playful. Banjo and timpani add to its unusual texture. But, as the title implies, this is intentional cognitive dissonance. The first verse sets up the simple situation, with Page’s character driving home on an average evening. The second verse has the crash: “No commotion / No screaming brakes / Most of it’s over before I awake…/ The worst part was hitting the ground / Not the feeling, so much as the sound”. It’s extremely vivid, which is what the band was going for. In an interview from around the time Maroon was released, Robertson said, “The song isn’t really about death, it’s about the cinematography of the moment.” Page, for his part, based it on the long, boring drives from Toronto to London, Ontario, to visit his fiancée. Robertson, on the other hand, had a brother die in a motorcycle accident, and this song is at least partially informed by that tragedy.

The song goes on to describe the protagonist’s out of body experience, as his soul leaves his body and watches the aftermath of the attempts to get him out of the wreckage. It climaxes with this line: “I guess it’s over now / ‘Cause I’ve never seen so much / Never seen so much / Never seen so much blood”. It hits a second climax at the end, as Page repeats a line from the first verse in a new context: “You’re the last thing on my mind”. As much as the song is about a horrible car crash, it’s also about the sadness of not being able to see a loved one again. It’s a gut punch of a song, and it’s a bold way to finish the album.

Or, at least it would’ve been if Barenaked Ladies didn’t include this hidden track that starts immediately after “Tonight Is the Night I Fell Asleep at the Wheel” ends. Kevin Hearn is a great musician, and his versatility allowed the band to expand its sonic palette in the wake of the departure of original keyboardist Andy Creegan. He’s also a solid songwriter in his own right, as several future BNL songs would attest to. Not to mention that the recording of Maroon occurred shortly after Hearn successfully recovered from a battle with leukemia, and the band wanted to spotlight him. Thusm “Hidden Sun” is Hearn’s first lead vocal on a Barenaked Ladies song, and it is a pleasant and inoffensive piano-based ballad. Yet, it undermines the power of the album’s ending, allowing Maroon to end with a sputter and flicker instead of a strong statement.