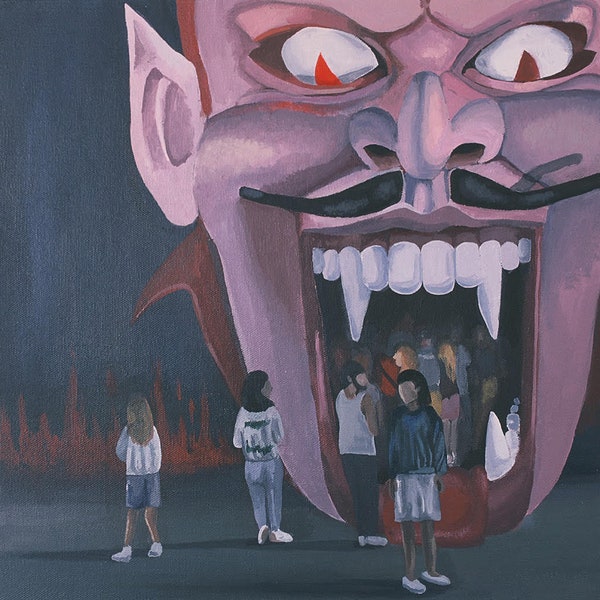 Spirit of the Beehive have always made music that has one foot in the tangible world and another in the ether. The Philadelphia band emerged from the depths of the East Coast’s punk scene, rising from the ashes of guitarist and vocalist Zack Schwartz’s beloved emo project Glocca Mora. Over the past seven years, the band has amassed a rabid fanbase, working hard to cement their place as indie rock’s favorite group since Animal Collective. Their latest, ENTERTAINMENT, DEATH, finds the act breaking out of the underground, finally getting media coverage that largely eluded them in the wake of 2018’s Hypnic Jerks. In spite of Spirit of the Beehive’s burgeoning mainstream popularity, ENTERTAINMENT, DEATH finds the crew staying true to their challenging, reclusive roots. It thrums with a fluorescent glow that feels like watching a flower blossom under a black light.

ENTERTAINMENT, DEATH came to life in a transitional period for the band. Losing multiple members at the top of the pandemic following the indefinite cancellation of touring and the dissolution of their previous label Tiny Engines, the group stripped down to a trio. Pieced together as a series of homespun demos bounced between bedrooms and basements, the album’s recording process was starkly different from the band’s prior endeavors, which were produced in a frigid warehouse. Members railed cigarettes and Adderall to stay attentive in the notably weird creative environment.

Schwartz and bassist Rivka Ravede each spent their teenage years tripping out, smoking weed, and wreaking havoc in the state of Florida. As a result, a flippant attitude towards authority quietly dwells in everything they create together. It’s not hard to imagine the act playing these songs at a big-name festival, but even the album’s prettiest moments maintain a sense of autonomy. This is best evidenced on the track “THERE’S NOTHING YOU CAN’T DO,” which morphs from verdant, skittering pop to bleak, dissonant screamo in under three minutes.

Although adapting to the constraints of the pandemic was far from a pleasant experience for Spirit of the Beehive, the impact that working in more comfortable spaces has had on the trio’s music is palpable. The fuzzed out angst that prevailed on records like Pleasure Suck and You Are Arrived (But You’ve Been Cheated) hasn’t gone anywhere, but on ENTERTAINMENT, DEATH it’s offset by lush synth chords and phased-out drum grooves. “BAD SON’s” glistening, glitchy guitars evoke early Toro y Moi, while “WAKE UP (IN ROTATION)” is jangly enough to recall New Zealand lo-fi favorites like The Cleaners From Venus and The Bats. You don’t have to work hard to identify the influence that Spirit of the Beehive’s peers like Body Meat and Japanese Breakfast have had on their music. In many ways, the album mimics Schwartz’s excellent post-chillwave mixtape I Am Gambling With My Life, released under the moniker draag me.

Trading vocals throughout the 37 minute record, Schwartz, Ravede, and newcomer Corey Wichlin share the spotlight on ENTERTAINMENT, DEATH. The album’s collaborative nature never feels forced, though, and the project blends into a postmodern blur that sounds a bit like waking up from an intoxicated fever dream. Tied together by samples of long-forgotten commercials, the record plays like the work of hotwired machines trying to cover The Beatles’ Revolver. Effects contort “WRONG CIRCLE’s” vocals into a highly stylized androgynous drone, while drippy Autotune on “I SUCK THE DEVIL’S COCK” brings to mind willows blowing in a warm breeze. “Always on my mind / I saw it the first time high, alone / When you hear the call, will you answer? / Always far from home / Relapse in a car,” Ravede sings on the track. Lyricism has never been the foremost concern for Spirit Of The Beehive, but their gritty songwriting carries a confessional surrealism that is simultaneously baffling, engaging, and off putting.

Spirit Of The Beehive are outspokenly wary of being pigeonholed as a psych rock band, but while their music doesn’t exactly recall Tame Impala or King Gizzard & The Lizard Wizard, their freewheeling radicalism brings to mind ‘60s counterculture figures like Timothy Leary and Roky Erickson. A heady electricity defines ENTERTAINMENT, DEATH, and even though its synthesizers and maximalist production choices make it a studio nerd’s fantasy, a human spirit beams through the album’s fluid arrangements. “Anywhere that you go, they will find you / You might wait but you’re already in the future / Anywhere that you go,” an eerie voice mumbles over a deceptively straightforward groove on “THE SERVER IS IMMERSED.” Listening to the album can feel like shifting between staticky radio stations in a digitized virtual reality. The record’s inexplicable flow never tries to win over its listener, but ENTERTAINMENT, DEATH’s lax ambition makes it the most cohesive Spirit Of The Beehive record to date.