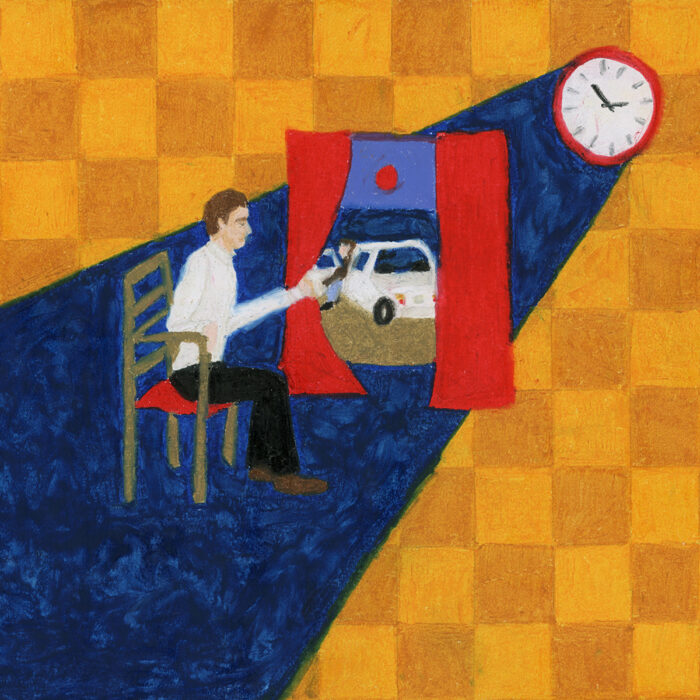 When he’s not busy working on a degree in political economy, Clarke Sondermann makes delicate, nuanced electro-acoustic pop under the moniker Pleasure Systems. The former Bernie Sanders staffer cut his teeth playing in the Pacific Northwest band The Washboard Abs before decamping to Philadelphia and launching his aforementioned solo project. Sondermann’s early work was marked by vague poeticism, defined by lyrics that felt like miscellaneous sentences from a Milan Kundera novel scattered over gentle instrumentation. Inspired by the passing of his partner Ed, Sondermann’s latest, Visiting the Well, is Pleasure Systems’ most challenging, honest work to date. The record grapples with heartbreaking loss, but it is as alluring as it is tear jerking.

Tied together by fluid synthesizers and low energy guitar strums, Visiting the Well’s composition style mirrors the nostalgia that courses through every song on the record. Duelling arpeggiations on the opening track “Blur” create a gentle backdrop for lyrics like “When we first met you seemed embedded in my brain / I thought I finally found the antonym of pain” and “The summer stretches to an empty swollen gloom / I spent the days making mosaics out of dirt.” Visiting The Well is a record seeped in torment, but while death is its primary subject matter, the record never feels unapproachable. Pleasure Systems’ latest plays like a tribute to Ed more than it does the diary of a grieving lover.

Visiting the Well was recorded while Sondermann was living with Body Meat’s Christopher Taylor and members of the beloved math rock band Palm. Eating breakfast together before spending their days recording and reconvening for feedback in the evening, Visiting the Well was shaped by some of the most prolific artists active in independent music today. However, the record maintains an intimacy that feels like stumbling upon a letter you weren’t meant to read. Recorded underneath train tracks on a noisy city street, the album somehow maintains a hushed-but-commanding energy that feels like the work of a songwriter talking to a ghost. “When your beard fell out / Coloring the bathroom sink in doubt / I told you you could rock a mustache / Well I lied / But you tried it anyway,” Sondermann murmurs over a plucked classical guitar on “When Your Beard Fell Out.” Even if you’ve never lost a loved one, the weight of Sondermann’s prose captures the blunt agony of a breakup, or watching someone battle terminal illness.

Sondermann’s work has always been familiar-but-unreplicable. Visiting the Well brings to mind artists like The Postal Service and The Antlers, but feels a touch too experimental to be pigeonholed. “What the Day Brings” merges live percussion and drum machines that come together so gracefully it’s hard to imagine even the most seasoned producer nailing the same production style. “Corpse Pose” employs whirring keys, pitch shifted vocals, and a dance floor ready groove that tastefully recalls Owl City. The East Coast’s finest musicians may have subtly impacted Visiting the Well, but sonically the project dwells in the same vein as The Washboard Abs’ peers in Oregon and Washington.

There’s a lot to unpack on Visiting the Well, but at the end of the day the album isn’t one whose merit can be translated into words. It’s the work of a man processing unfathomable pain, crafting compositions that accurately represent his internal dialogues. Like every Pleasure Systems record, Visiting the Well has flown quietly under the radar, but it’s a moving, betwitching, and unforgettable release. It’s not hard to imagine the album eventually being recognized as one of the great pieces of independent music inspired by human sorrow.