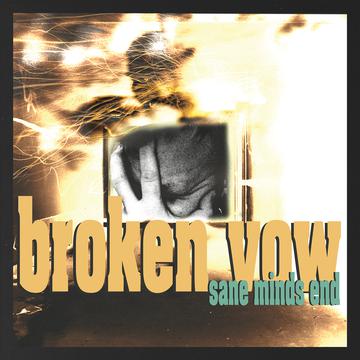 We are living through a golden age of hardcore, it seems. Between critically acclaimed releases by Turnstile, One Step Closer, Militarie Gun, Regional Justice Center, and Angel Dust, the genre’s going through a sort of renaissance this year, as bands push in new and unexpected directions. Broken Vow’s first official EP might not reinvent hardcore, but their take on ’90s-influenced metallic hardcore is up there with the best of the year.

Last year’s demo gave a glimpse of their potential, a barnburning nine minute taste of the band; Sane Minds End is rather similar in that regard. The band’s taken time to really develop their ’90s -core influences; Earth Crisis is the first band referenced in the press release that accompanied the EP’s announcement, and it’s easy to see why. The raw production that marked the demo is cleaned up here – without sacrificing the band’s edge – but the real change is that Broken Vow’s learned to take their time. These songs are just as brutal, but they’re more paced, more sure of themselves.

Save the bridge of closer “Your Fate,” these songs don’t operate at the breakneck pace of demo tracks like “The New Resistance”; instead, they unfold with the piling of increasingly heavier riffs. “Illusion,” for example, nearly enters sludge territory as it segues into a spoken (well, hoarsely shouted) word bridge. That Broken Vow does not exclusively deal in such fast-paced hardcore works to their credit, allowing the songs a bit of breathing room and the chance to distinguish themselves. It never loses its heaviness, though; moments like the fuzzy coda of “Broken Vow” only punctuate the breakdown that precedes it. Like their demo tape, Sane Minds End suggest that Broken Vow has a classic in them somewhere. It’s likely only a matter of time before their brand of hardcore is the touchstone for edge kids everywhere.