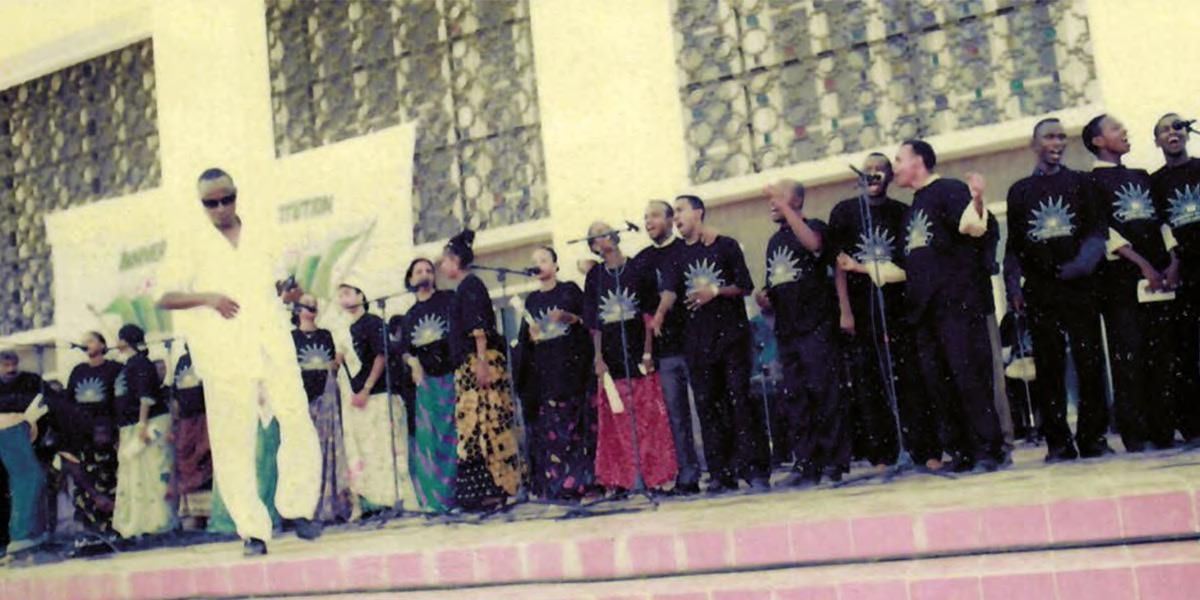 After years of negotiation with the national government, Ostinato Records released the first album ever produced in the Republic of Djibouti for international distribution: The Dancing Devils of Djibouti, a cosmopolitan masterpiece. Landmark that it was, it has only marked the beginning of Ostinato’s work in shedding light on Djiboutian culture. On Super Somali Sounds from the Gulf of Tadjoura, they acquaint us with 4 Mars, the state-sponsored 40-person ensemble tasked with providing the soundtrack to an independent Djibouti.

Ostinato first introduced audiences to 4 Mars on Sweet As Broken Dates, a multi-artist compilation of recordings from radio archives buried underground at the start of the Somali civil war. 4 Mars’ track “Na Daadihi” was easily my favorite, hauntingly beautiful melody sung by an exuberant chorus. Super Somali Sounds, the first of an intended Djibouti Archives series, builds on the popularity of that cut and takes us deep into the group’s discography, drawing on the group’s studio recordings and live performances between 1977 and 1994.

It’s clear that these archives have seen their fair share of struggle. Glitches, pops, and bumps add inescapable texture, unevenly distributed across the board. These are recordings prematurely aged, but their grit belies fresh sounds that speak to Djibouti’s history as a port region connecting the Red Sea and the Indian Ocean to the Horn of Africa. Much of what made The Dancing Devils such a standout album was its simultaneous referencing of sounds across continents and styles. Super Somali Sounds takes us even deeper into those layers of space and even time.

1970s funk, 1980s synthpop, Ethiopian jazz, Somali disco, Yemeni ballads, Bollywood, and even inklings of reggae are present in 4 Mars’ work. For those who can’t understand their lyrics, these sonic layers are essential parts of 4 Mars’ work as the officially-sanctioned soundtrack of a nation. They remind us that Djibouti, though small in area, is a cultural hub, a place where people meet and exchange goods, ideas, and sounds, and have for centuries.

Of course, the glories of Djibouti are exactly what we’re supposed to glean from the state’s top singers, musicians, actors, and other luminaries. That much is apparent in the track subtitles, things like “Motherland” and “Song for Djibouti’s President Ismaïl Omar Guelleh”, as well as the inclusion of a “Traditional song to escort newlyweds” souped-up with heavy synths for the modern nation. But if the agenda is clear, so is the power of each groove. There are some spectacular fireworks on hand here: the acid-strong guitar solo on “Abaal”, the brassy classic soul of “Maalkii Runta Ahaa Anigaa Ka Rooree”, the East Asian folk-jazz influences of “Tilman Baa Lagu Socdaa”. But don’t mistake it for fusion: this is simply Djibouti, gateway and gathering point. 4 Mars do their job well.

Super Somali Sounds from the Gulf of Tadjoura poses as many questions as it answers about Djiboutian popular music, ones it seems Ostinato Records might be in the best position to answer as they maintain reciprocal relations with the Djiboutian state-run media. How deep do the archives go? What other combinations of sound and geography lie within them? What the future holds in terms of both archival research and new repertoires remains to be seen, but Super Somali Sounds leaves no doubt that we’re nowhere near hearing it all.