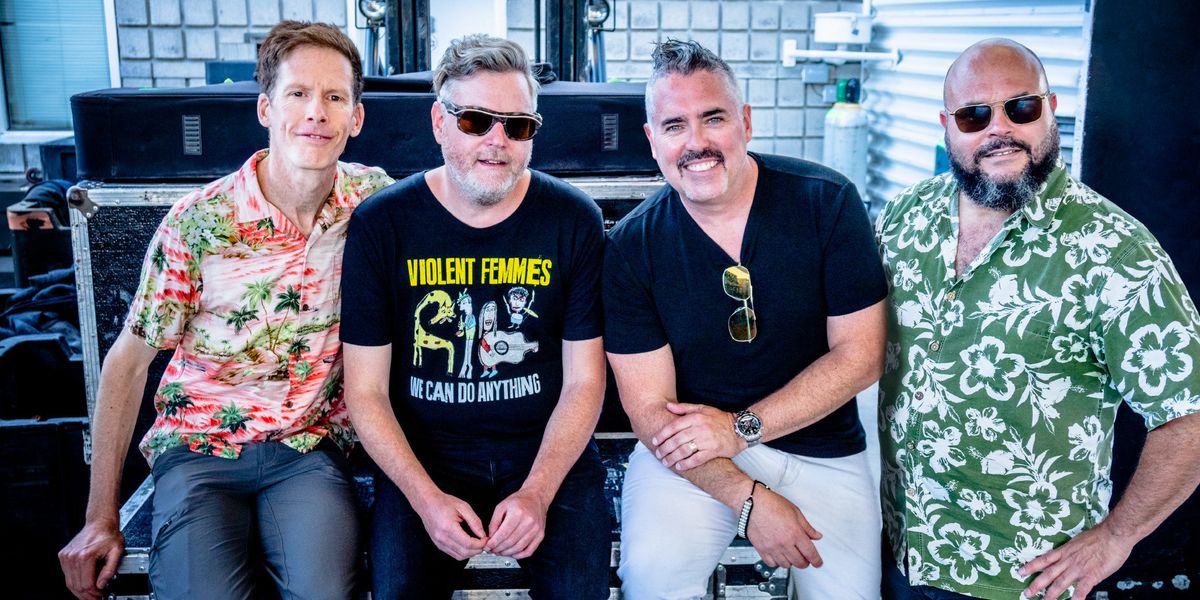 I recently took a very unscientific survey among some music-loving friends concerning Scarborough, Ontario’s most famous band, Barenaked Ladies. One friend, Dave W., wrote: “I am an unabashed fan. I think Steven Page has one of the best voices in pop history. Stunt [1998] was (is) one of my favorite albums. And, of course, their first two [Gordon and Maybe You Should Drive] are like requirements for Gen X people; they’re two of maybe ten to 12 albums that I can listen to beginning to end without having to skip a song.”

Meanwhile, friend Shawn C. notes: “Y’know that bro crew that seemed to maneuver somewhere among the theatre group? Or, among a lesser school sport (like curling) but acted like they were on the football team? And school government, they thought they were witty as hell because they could quote (Gen X specific) Princess Bride and Holy Grail? That’s what BNL reeks of: ‘We’re sooooo witty.'”

For a bunch of affable Canadian guys, Barenaked Ladies have always been polarizing, perhaps never more than with the release of their fifth album, Maroon, which celebrates its 20th anniversary this month. Even though it was recorded from April through June 2000, and released on 12 September of that year, Maroon is a strong contender for the last great pop-rock album of the 1990s.

The ’90s had been productive for Barenaked Ladies, whose origins stretched back to the grade school friendship of founding members Steven Page and Ed Robertson. Following the surprise success of an independently released tape in 1991, BNL hit the big time in Canada with their full-length debut album, Gordon. Though primarily famous for goofy novelties like “If I Had $1,000,000” and “Be My Yoko Ono”, Gordon also showcased the band’s talent for super-catchy pop tunes (“Enid”), more introspective pieces (“Brian Wilson”), and unexpectedly dark numbers (“The Flag”).

The band settled down a bit on the subsequent two studio albums—1994’s Maybe You Should Drive and 1996’s Born on a Pirate Ship—before releasing 1998’s Stunt, which exploded thanks to the much-loved-yet-equally-loathed hit single “One Week” (you know, the chickety chicken song), which spent exactly one week atop Billboard‘s Hot 100 singles chart. While Stunt is a fine pop-rock album, that fact that its success was propelled by yet another goofball song was fodder for the band’s detractors, who saw them strictly as part of the “nerd rock” crew of contemporaneous bands that included They Might Be Giants, Moxy Fruvous, and Cake. Hell, I was once a part of a discussion over which of these bands was the greatest that, in a slightly more intoxicated atmosphere, could have become a fistfight.

In the wake of Stunt, Barenaked Ladies set out to record a follow-up that focused on their pop smarts and reflected a somewhat more adult lyrical point of view, while also dialing down the eccentricities that gave the band their reputation as a novelty band. Maroon, produced with an eye toward the pop charts by Don Was, was the result. I obtained my copy of Maroon in the most ’90s way possible: by buying it upon release at a Borders Bookstore, the local Tower Records being too far away to visit during my lunch hour. I popped into my car’s CD player, where it spent the next year in heavy rotation.

From the opening guitar chords of the power-pop opener “Too Little Too Late”, I was totally on board with Maroon, though my wife, Donna, had more patience with the band when they strayed a bit off the pop path (such as with the lite soul of “Conventioneers” and the theatrics of “Sell Sell Sell”). Neither of us knew exactly what to make of the dark first-person narrative of a car crash, “The Night I Fell Asleep at the Wheel”, though we knew we had to listen to it to get to the hidden bonus track (such a ’90s concept!), “Hidden Sun”, a quietly luminous meditation by band keyboardist Kevin Hearn.

While the music on Maroon was as catchy as anything the band had done before. It wasn’t hard to miss the fact that lyrically, these were songs about regret (“Too Little Too Late”), laziness (“Never Do Anything”), and a level of boredom that was practically existential (hit single “Pinch Me”). The exuberant wackiness of “Be My Yoko Ono” was missed at times, but the depth and maturity of the album generally felt right for where the band was in their lives (young married men with young children) and, perhaps, for where many of its fans were in theirs.

Contemporary music writers in 2000 were as divided about Maroon as Dave W. and Shawn C. are about the band in general. In Rolling Stone, Tom Moon, the future author of 1,001 Recordings to Hear Before You Die, wrote that “tart, smart writing defines much of Maroon, making it a nyah-nyah to those who dismissed Barenaked Ladies as nothing more than an accomplished novelty act”. He also noted that the band “are in pursuit of nothing less than the Supremely Crafted Pop Moment, that gilded edge-of-orgasm refrain that can change your life just by the way it sounds, no matter what the words say”. Moon’s conclusion? “It’s been a while since something so unabashedly wholesome, a rock album so incandescently proud to reference classic pop, came over the transom.”

On the other hand, a Maroon review in British magazine NME was headlined “They All Fucking Suck” (the “They” refers to every song on Maroon), preparing readers for its 0 out of 10 rating. The review also used another ’90s icon, the TV sitcom Friends, to illustrate the alleged suckiness of Maroon. “So how does Maroon compare to previous BNL albums? Who knows? Who cares?”, the unnamed NME critic writes. “Nobody with a smidgen of soul has EVER listened to one all the way through and this poor bastard hopes he never has to ever again. EVER!”

Despite that kind of snarky negativity, Maroon proved to be a modestly successful follow-up to Stunt. Even if the singles from the album didn’t reach the ultimate position of “One Week”, most fans appreciated the solid pop-rock nature of the album and flocked to Barenaked Ladies shows. Opening with a recording of Ken Nordine’s spoken-word piece, “Maroon” (whose lyrics are printed in Maroon‘s CD booklet), concerts during the Maroon tours cemented the band’s reputation as one of the most entertaining live bands of the era. Years later, at their 2018 induction in the Canadian Music Hall of Fame, none other than Rush vocalist/bassist/keyboardist Geddy Lee would extol the musical prowess of each group member.

Looking back from the vantage point of 2020, Maroon represented a turning point for Barenaked Ladies. The follow-up to Maroon, the now largely-forgotten Everything to Everyone, wouldn’t arrive until 2003 and would be the band’s last album for a major label. While the band has contributed one more large-scale moment to pop culture history—namely, the theme song to long-running sitcom, The Big Bang Theory—Barenaked Ladies seems content to pursue its own vision, particularly since the departure of Steven Page in 2009. The band continue to release albums on a regular basis, including a collaborative effort with a cappella group the Persuasions in 2017.