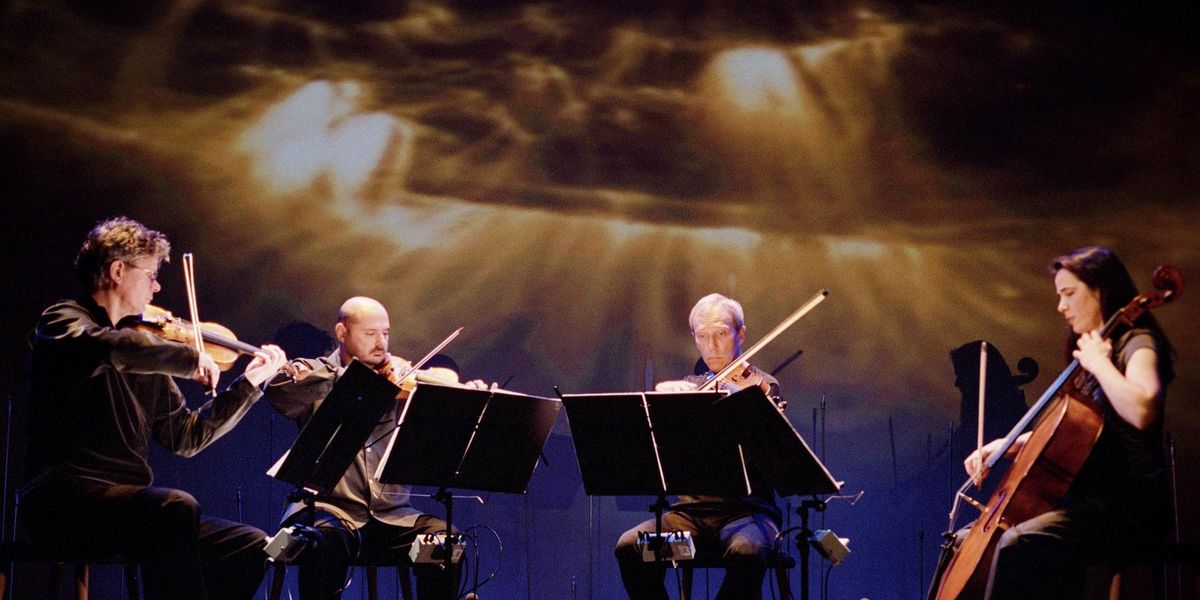 1. Alfred Schnittke – “Collected Songs Where Every Verse Is Filled with Grief” arr. the Kronos Quartet (1997)

Alfred Schnittke’s most famous piece is probably known to most through a version not quite his own. Originally composed for chorus from the works of St. Gregory of Narek, “Concerto for Mixed Choir” was rearranged by the Kronos Quartet in 1997 and is a work of painful, strained beauty. A hint of dissonance underlies the melancholy and makes its occasional turns into major sounds all the more disconcerting.

Though many may know his “Third Symphony” from its use in movies like The Tree of Life, my favorite work of Górecki”s is slightly less daunting (a half-hour as opposed to a full one), and agreeable for both devoted and distracted listeners. I would describe its movement as akin to water: flowing, lapping, with no clear break from beginning to end. Comprised of five words, all Latin, this choral work is massive, with the Polish composer indicating that it has been scored for 120 voices. It was originally composed in support of the Solidarity movement, though due to government repression it was not performed until 1987. It compresses time, so that the beginning and end seem two points clearly visible from one another, and yet separated by a vast distance.

Existing in three distinct versions, with rearrangements occurring in 1990 and 2005, all by Bryars, I prefer the first for its (relative) concision. “Titanic” contains one main string refrain, later replayed and refracted in various voices to give the sound of an orchestra playing on the sinking ship. Scattered throughout are interviews with survivors of the crash, giving stories both dramatic and banal. Not to be coy, but the result is mammoth, even if the number of instruments used is small. The melody is vast, wide open, and it is cut down to size by the effects employed, as well as additional instruments like music boxes brought to bear. It is the sound of the open sea, suddenly drowning you.

This American’s four-movement choral work was the 2013 Pulitzer Prize winner for music and the first for unaccompanied voices. It runs through a smattering of vocal styles, including speaking, breathing, throat singing, and wordless harmonizing for an exhilarating 20-ish minutes. Shaw contorts voices in ways that nonetheless feel natural and familiar, touching on keening, the clarity of electronic music, and bird song. Shaw, who also performs with the American Contemporary Music Ensemble (ACME) in New York, has a number of works for listening, as well as score excerpts for browsing, on her very helpful website, including other choral pieces, as well as string quartets, and others. Still working on her doctorate, only more exciting things can come in the future.

Possibly the most minimal piece from the father of holy minimalism, “Spiegel im Spiegel” is frequently scored for piano and violin, though a cello, bass, or flute may replace that second instrument. The structure is incredibly simple: the piano plays slow patterns of three notes, occasionally augmented by a deep bass tone, as the “melodic” instrument holds long notes overhead. On paper, it looks dull; in practice, nothing is more spellbinding. For this reason, its early-music derived-tonality has appeared in films, commercials, and was even the signal for when the seatbelts in early 2000s Volkswagens were unbuckled. His style is so pleasant, so distinctive, and yet impossible to truly replicate, that Pärt has become a titan of post-1950 composition without having set foot in the avant-garde in years.

The works of this Argentine composer have been reimagined on a variety of instruments, but most tantalizing to the ears is this six-part cello arrangement of “Mariel”, originally for cello and vibraphone. Beiser performs the piece herself in the below clip, though it can be performed by up to six cellos in concert, each part looping and building on the others with frightful intensity. Osvoldo Golijov’s pieces tend toward the drifting and ambient, but “Mariel” feels direct in Beiser’s hands, clear as a shaft of light compared to the hazy oceanic textures he normally works in.

Straightforward and lyrical, this work was brought to the attention of the wider world when it was featured on Pieces of Africa, a collection of compositions from African composers (Tamusuza is Ugandan) performed by the Kronos Quartet. After training in Baganda, Tamusuza studied under Kevin Volans, whose “White Man Sleeps” is included on Pieces, among others, and the diversity of influence proves vital to his music. It grabs you from the start, never truly relenting.

A work for solo cello, “Parallel Universe No. 3” is a showcase for the potential of Serena Tideman’s native instrument as a solo performer. Her bowing is at times vigorous and others languid, often in the space of just a few bars. Most importantly, she generates gut emotions like awe, excitement, anger, and anticipation easily. Perhaps it is because Tideman composes for an instrument she plays, but her command of just what the instrument is capable of is astounding, virtuosic but always in service of the piece.

Possibly the piece that deviates most from the norm, Basinski’s “Disintegration Loops” are almost as famous for their story as for the actual sound of the thing. The composer attempted to transfer a number of old tape loops to a digital format, but as the tapes ran through the digitizer, pieces of magnetic material began to fleck off, the pieces dissolving the further on they went. In practice, this left jagged holes carved out of the hazy sounds, sometimes appearing gradually, sometimes brutally as a lot of material falls off at once. The final loops were completed on 11 September 2001, and Basinski and his friends sat on the roof of his apartment in Brooklyn, watching the smoke billow from Ground Zero as the pieces played. In some sense, this threatens to overshadow the work itself, which is staggering even outside of the allegory it now represents. “dlp 1.1” is possibly the greatest of them all, devastating in its accidental replication of the violence of all things.

American composer Marshall’s work forms a bridge between ambient, electronic, and classical music, a trait on display here. Composed for “brass sextet and tape”, the piece is stridently amelodic, filtering through many permutations of the same mood. He rejects both serialism and holy minimalism for something more like the sound of a broken ham radio.

Possibly the foremost master of dissonance and the true avant-garde voice post-1950, Penderecki’s range was phenomenal, composing for quartets, orchestras, choruses, and everything in between. “St. Luke Passion” is my pick for its vicious atonality, powerful emphasis on serialism, and its brief bursts of melodic, major voices that feel like the light of God shining down on the suffering Christ of the Passion. In fact, rarely in classical music has such tremendous violence been conveyed so directly. If nothing else, this makes Penderecki a master.

Now, I know what you’re thinking here, but hear me out. This four-part composition may contain elements of improvisation, of free jazz, but in what sense is it any more different from “Miserere” than “Fog Tropes” or “dlp 1.1”? If this list has shown anything, it is that compositional music post-1950 is full of abrupt left turns, of aiming directly for the ditch and coming back out stronger. I would argue that Coltrane’s piece is the most accomplished, most affecting, and best American composition in the period considered, hands-down.

Its four-part structure works to its benefit as a whole, differentiating between each section in Coltrane’s life-long striving for spiritual release through music, building tension and release not just in each movement but through all 30 minutes of the thing. Bandleader and virtuosic musician he may have been, the man was a composer, and the marks of his pen, and indeed his scalpel, are all over A Love Supreme. It is judicious where necessary, opulent in other moments, never anything less than the mind of a genius.

Many composers pre-1950, Stravinsky among them, borrowed liberally from ragtime and jazz, subsuming them within a mantle of “sophistication” and “complexity” it was implied never existed in the source material. Post-1950, it’s time to acknowledge those progenitors as something other than materials to be cherry-picked; they were high art in their own right, and never more so than on A Love Supreme.