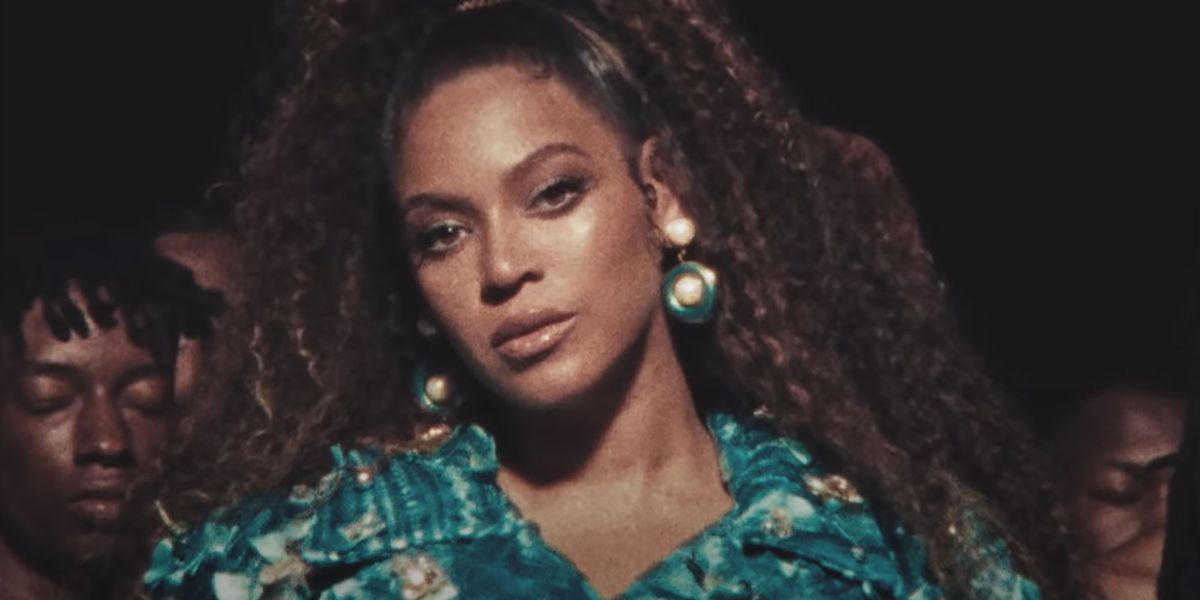 “Let Black be synonymous with glory,” says Beyoncé in the opening sequence to her visual album Black Is King. The album amplifies the voices and images of Black culture with astounding beauty and deft pageantry. With reliance on tradition, as well as culling influence from a myriad of contemporary sources, Beyoncé uses overt imagery and references to Black culture to construct an empowered identity. Black Is King heralds the glory associated with Black identity.

Directed, written, and produced by Beyoncé, the film is a visual companion to her 2019 record The Lion King: The Gift. An album Beyoncé curated for The Lion King remake, Black is King incorporates the voices of The Lion King’s actors while revisualizing scenes from the film. In part, Black is King is a reimagining that avows a devotion to the Disney monopoly. Black Is King is only available on Disney Plus, with the company recently pulling its free trial.

Whereas Beyoncé strives to fill the role as Queen Bey of the people, Black Is King’s marketing and accessibility positions her as Queen Bey of the corporations. However, Black Is King’s reliance on Afrofuturism is the film’s recuperation from Disney’s clutches. In doing so, Beyoncé regains control of the mythos appropriated by The Lion King and its cartooned anthropomorphized entities. In turn, she assuredly reclaims Black Is King as a tenant of Black culture.

Black Is King‘s stunning imagery fortifies an already engrossing narrative. The film depicts an African king cast out from his family at a young age. Yes, this is essentially the crux of The Lion King. Yet Beyoncé uses the opportunity to evoke statements on Afrofuturism, a theme consistent across her catalog but emphasized in Lemonade and “Formation”. The visuals for “Find Your Back” connects to the Afrofuturist Society’s reliance on the cosmos for explanation and influence. Afrofuturism’s use of extraterrestrial tropes affirms dislocation as part of the Black historical experience. More so, the portrayal of an outcast African king engenders parallels to African history, the Middle Passage, and the Black Lives Matter movement. Black Is King reclaims identity regardless of whether it is earthbound or cosmic, an echo of Octavia Butler’s work.

The alienation often associated with Afrofuturism is clearly viewed in “Nile”. The uneasy connection between lineage and self is made apparent when a disembodied voice utters:

Here, Beyoncé poses a vital question: where can African-American identity lay its claim? The forced disconnection from Africa and its culture enshrines a lasting estrangement. This shares a striking resemblance to the systematic oppression and institutionalized racism erasing African-American identity. As such, Beyoncé uses Black Is King to reclaim a space for Blackness while suturing Pan-Africanism.

Much as the inclusion of Burma Boy transcends space and time, Beyoncé builds a similar connection between African and African-American musical culture. Black is King features, Jay-Z, Tierra Whack, Childish Gambino, and Pharrell Williams, often seamlessly blending in with the afro-pop and dancehall. This is audibly asserted by Beyoncé, Shatta Wale and Major Lazor in “Already”, only to be stylized by the shot of the Pan-African flag.

Even with the discursive power of Black Is King, Beyoncé stays on-brand with her adulation of womanhood. She is the film’s matriarch, at times embodying the aura of the cosmos, other times maintaining her gaze as guardian or personifying Jochebed, Mose’s mother. The film’s most salient message is rendered by “Brown Skin Girl’s” celebration of Black women and girls. A powerful female collective is recreated with cameos by Naomi Campbell and Lupita Nyong’o. The image of Beyoncé’s mother and daughters, Tina Knowles-Lawson, Blue Ivy and Rumi, establish the significance of generational power. At one point, Kelly Rowland and Beyoncé embrace in a tender display of solidarity. Much as Afrofuturism, Black Is King enables the intersection of race and gender as the foundation for collectivity.