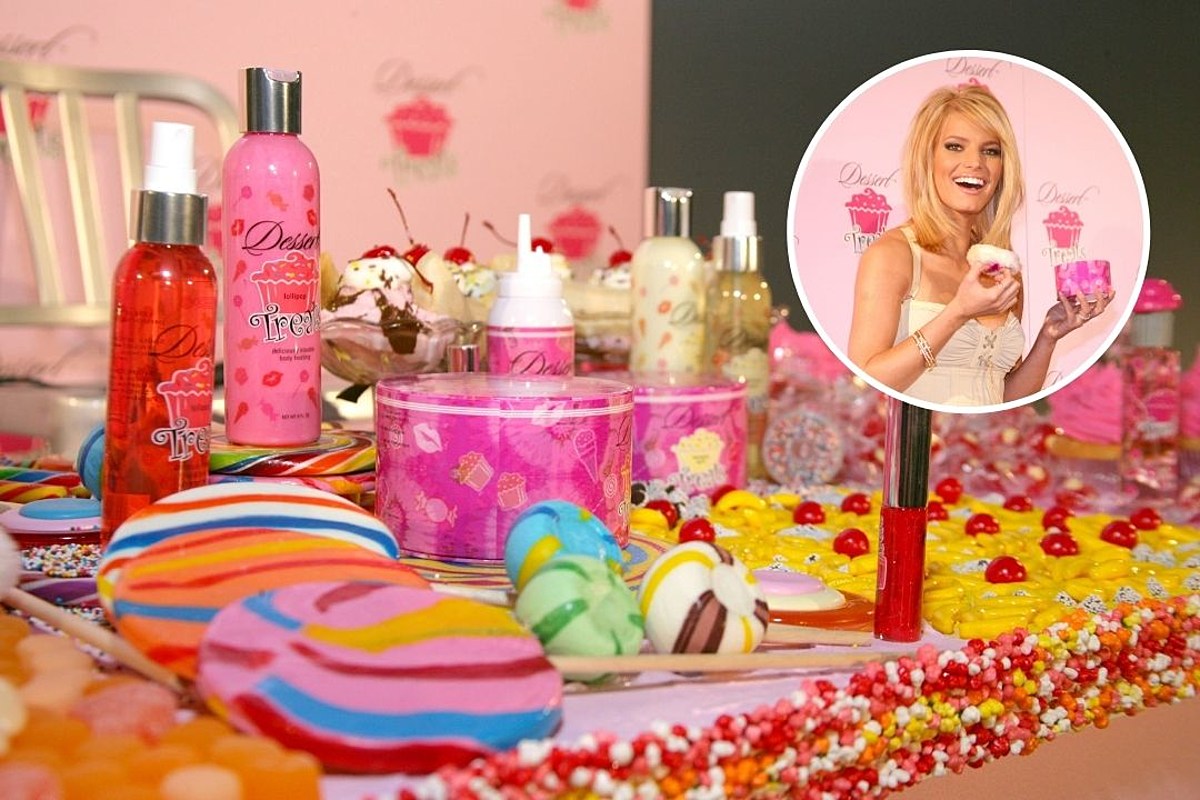 In 2004, the pop music superstar changed the beauty industry forever when she released Dessert, the first ever line of “kissable and tasteable” beauty products that included lip gloss, body cream, fragrances, hair and body mist, shampoo and body wash.

“Dessert girls are full of sweetness and desire and they don’t mind getting their hair a little messed up in the name of seduction,” the original press release read. “Sexy girls want a Taste.”

Although the target audience for Simpson’s now discontinued line of scented and flavored products consisted of young girls, the product marketing was hyper-sexualized. The brand included product titles such as “Trya my Papaya” and “Delicious Kissable Hot Body Topping” while directions for products, like the 8oz Whipped Body Cream with Candy Sprinkles, instructed, “Slather it on yourself or a friend to be completely smoochable and delectable.”

Naturally, Simpson and her then-husband of two years, 98 Degrees member Nick Lachey, served as the sweet and seductive models for the brand, trying out the products on each other in the promotional photos.

“Very sensual products,” Lachey told On Air with Ryan Seacrest about Dessert, “I was fortunate enough to be able to taste test.”

Despite the popularity and success of the “lickable” products, Dessert stopped production in 2006 after some undelectable lawsuits.

In November 2004, a cosmetics manufacturing company called Cosmojet sued Simpson, Dessert Beauty Inc., and Sephora, claiming they were owed $200,000 for products that Cosmojet had already manufactured.

According to People, a rep for Simpson said in a statement: “Jessica Simpson is a spokesperson for Dessert products and has no involvement in the day-to-day operation of the company’s business. Ms. Simpson has no knowledge whether Cosmojet’s claim has any basis, nor does she have any responsibility for the company’s accounting and billing procedures or payment obligations.”

The spokesperson further added: “Ms. Simpson does intend to vigorously dispute Cosmojet’s meritless claims against her and to take legal action against Cosmojet for involving her in this matter.”

Despite the Cosmojet lawsuit, and the sexual nature of the cosmetics, Simpson went on to release two new lines geared towards younger consumers in 2005 called Dessert Treats and Sweet Kisses.

By 2006, another lawsuit came about regarding the title of one of the products. Mara Fox, guitarist and creator of a fragrance line called “Love Potion” filed a lawsuit for the brand’s use of the term “Love Potion,” but ultimately lost.

During an episode of Simpson and Lachey’s MTV reality show Newlyweds, Simpson is shown taste-testing the Dessert products for the first time while on the set of the promotional photoshoot. After hours of posing with the cupcake-laced lip glosses and ingesting the product, Simpson falls ill and the rest of the shoot is cancelled. Although it seems logical that Simpson got sick from over-indulging in her own product, which lists it’s ingredients primarily as sugar, corn starch, confectioners glaze, and various color dyes, the episode ends with her saying that doctors told her she had come down with a “24 hour flu.”