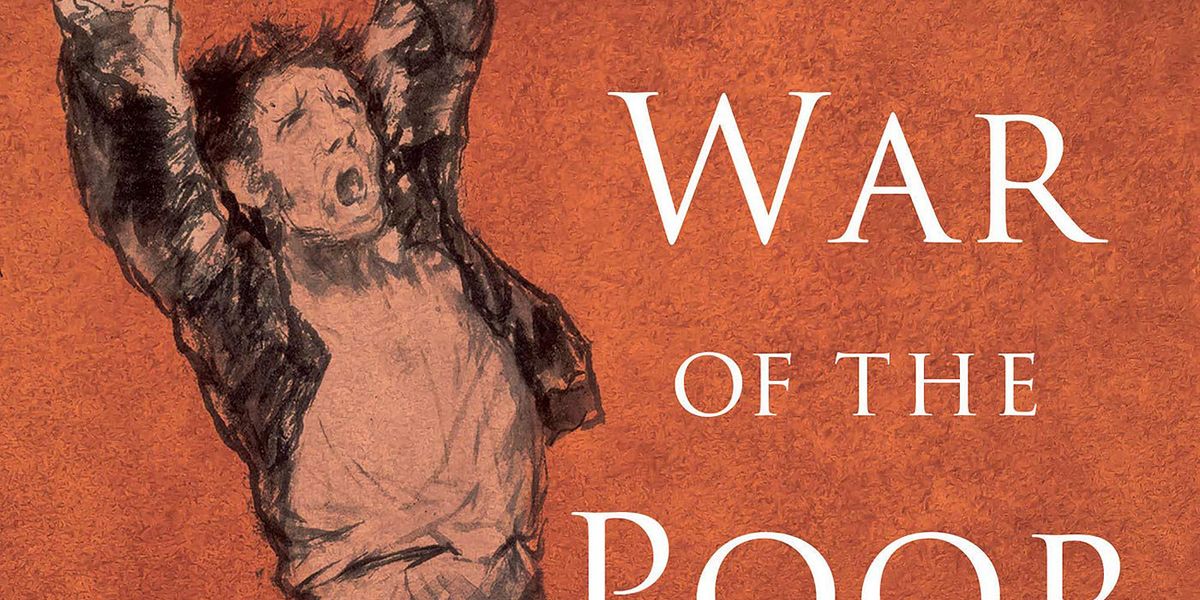 Éric Vuillard’s The War of the Poor lifts readers from the contemporary battlegrounds of class struggle and deposits us in the frenzy of the 16th century. The Protestant Reformers had declared war on the privileged elites of Catholicism, but the struggles of class and faction inevitably spread within their own ranks as well. As revolutionaries have realized throughout history, when you radicalize the masses sometimes you create a movement you cannot control.

The War of the Poor is centred on Thomas Muntzer’s peasant uprising – an uprising against, well, everyone – in early 16th century Germany (often referred to as the German Peasants’ War). Originally an ally and colleague of Martin Luther, Muntzer eventually became too radically militant even for his mentor to handle. Vuillard offers dramatic snapshots from Muntzer’s life – his persecution by Catholics and Protestants alike, his fiery populism, the rise and fall of his peasant army, and his eventual capture, torture, and execution.

He couples Muntzer’s story with a brief survey of the lineage of radical reformers that preceded him – peasant rebel leaders like John Wycliffe, John Ball, and Wat Tyler. All were inspired by the emancipatory message of the Protestant Reformation and took it to its logical end – which was too far for the liking of Protestant elites – as a call to take up arms against all forms of class oppression.

Vuillard’s style is delightful. His literary approach is more art than history, but that ought not to put readers off. In an era when painstaking, meticulous fact-checking has come to predominate over literary style, and in which so many writers cling to a boorish dependence on research over imagination, Vuillard stands out. He reminds readers that imagination has a critical role to play in history. Facts without story presuppose a history without purpose, and while empiricist scholars may argue that data transcends ideology, the truth is that history serves no function without a narrative context in which to understand it.

The magic of liberalism was to entrench history within an imaginative, deeply creative framework and then pretend, convincingly, that framework did not exist. It’s what has led so many contemporary scholars of race, gender, and identity to rightly criticize liberals for failing to recognize the ideological principles underlying their constructed narratives.

But to imagine that a history can be produced with no imaginative narrative underpinning it and giving it motion is to err on the other end of the spectrum. An apolitical, empirical history is one up for sale to the highest bidder, and this has contributed immensely in recent years to the wholesale manipulation of fact by the far-right. The far-right is not afraid to tell stories. That they excel at it is a reflection of the lamentable reality that progressive-minded scholars have largely ceded the storytelling terrain to them.

Therefore, it is imperative that we place our histories in context, and context is always a product of the imagination. The fault of liberalism lay not in formulating a narrative context in which to place historical fact. It lay in the liberals’ lack of imagination, by failing to incorporate any room or perspectives in their narratives beyond those of cisgender white men.

Vuillard’s work reminds readers of the importance of imagination in historical storytelling. Storytelling is, fundamentally, what historians do, and when it comes to storytelling Vuillard has few rivals. His books render the cinematic sweep of history in a lush, fast-moving style that oozes with literary effect.

The War of the Poor, with its focus on the populism of Protestant ‘reformers’ like Thomas Muntzer, is a complex and troubling read in the political present. When we are taught the lives of Reformation characters like Martin Luther or Thomas Muntzer, it is usually with a sort of barely veiled admiration for these protagonists as single-minded rebels, proselytizing their radical ideas with unshakeable courage and unswerving faith in their righteousness. We are told to appreciate their conviction and accomplishments – the ways in which they held true to their own steady faith, eventually collapsing the iron vise of Catholicism over Christendom.

But those of us living through the rise of right-wing movements today have a very different vantage on populism. With his determination to have his own way and interpreting disagreement as treachery or corruption, Muntzer was, in his own way, like a fanatical Donald Trump who simply never achieved a similar level of political power.

Today’s populism appears to take a very different form from that of the Reformation (the very labels we now apply to these historical moments underplay the blood-soaked reality of those violent centuries). Today’s populists are tyrannical, hate-filled monsters like Trump, Vladimir Putin, Rodrigo Duterte, Jair Bolsonaro, Recep Tayyip Erdoğan, Viktor Orbán… the list goes on. They may differ in degree from the populists of the Reformation in that they (more openly) grasp at material things – money and power — whereas the religious rebels appeared to pursue dominance of a more spiritual, less pecuniary nature. But in many respects, they don’t differ, since ultimately they all sought power. Is unshakeable faith and conviction – no matter which idea it’s in service to — really something to celebrate anymore?

Of course, by forcing Christendom to accept a plurality of faiths (eventually, grudgingly, bloodily), the Reformers achieved something important and helped lay the groundwork for the religious tolerance and liberal attitudes we benefit from today. But for many populist Reformers (like Muntzer) this was almost beside the point – an accidental by-product — and many of them smashed plenty of heads through their fanatical intolerance along the way. Vuillard’s account reminds us of this; he doesn’t shy away from the darker sides of the war of the poor.

Like his other recently translated work – Sorrow of the Earth (Pushkin Press, 2017) and The Order of the Day (Other Press, 2018) — The War of the Poor is a short read (and like its namesake, over almost as quickly as it’s begun). But it’s a beautifully written, deeply provocative one (translator Mark Polizzotti deserves full credit for retaining Vuillard’s striking style in the English edition). The dearth of detail or straightforward chronologies will probably leave the reader wanting to learn more about the Peasant War, and the period’s broader history, from other sources. But the power of Vuillard’s writing and the complex juxtapositions of ideas that he presents will linger longest in the reader’s mind, and indelibly inflect the contours of fact that other more traditionally-written histories might provide.