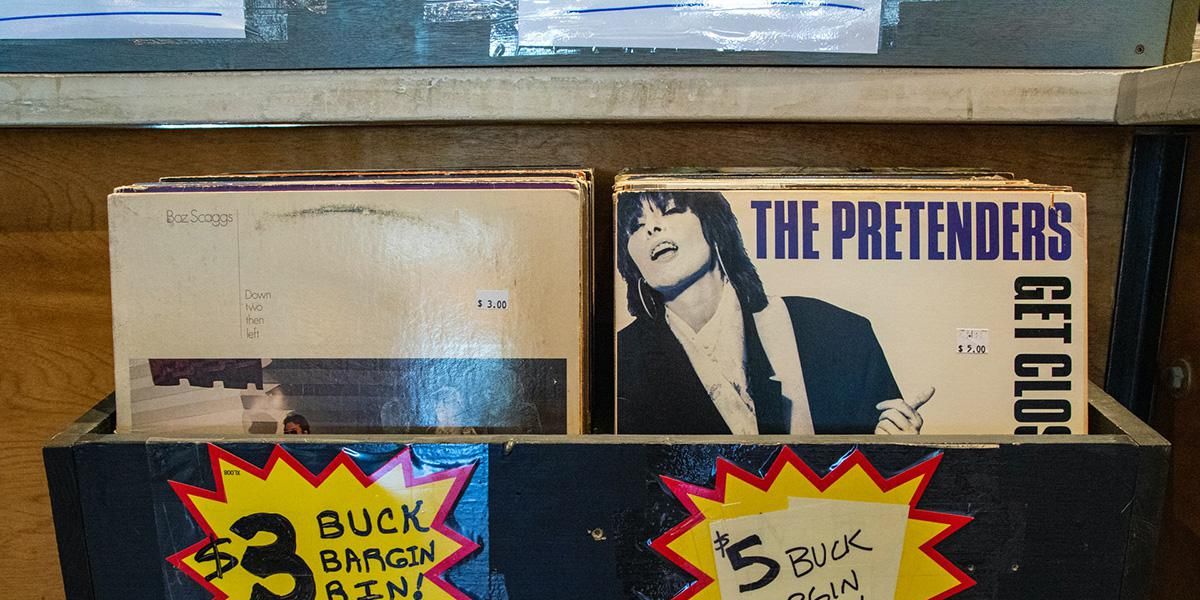 ​It’s tough putting this album above other career suicide albums that have more history on their side (see Hole’s Celebrity Skin and Garth Brooks’ Chris Gaines vanity project), but the volume of toxic prerelease publicity surrounding Lulu automatically qualifies this as a Top Ten entry. From the beginning, music writers (and more than a few Metallica and Lou Reed fans) balked at how nothing positive could come out of such a pairing.

But just like excessively negative reviews can make movies like Batman and Robin and Catwoman essential viewing for movie buffs, Lulu became a “must listen” event in its own right. Indeed, Lulu represented one of those rare moments that brought in people from all different musical backgrounds. You may not have picked up the album, but chances are if you have a Velvet Underground or Metallica record in your collection, the element of curiosity made you at least give one of the songs a listen.

One of Lulu‘s most notable accomplishments was how it gave some rock critics notoriety just because he or she wrote positively about the album. And for all the talk about how Lulu was destined to be on every critic’s “worst of” list in 2011, the album actually placed higher than such well-received releases as Cut Copy’s Zonoscope and Lucinda Williams’ Blessed in 2011’s Village Voice Pazz and Jop poll.

Yes, it’s regarded as the Beastie Boys’ best album. Yes, it’s one of the best rap records of all time. But in 1989, few bands achieved such a commercial drop-off as the Beasties. Coming off nearly two years of lewd behavior and MTV dominance, people seemed to have had enough of the trio’s antics. Their heavy metal fans had releases by Metallica, Slayer, and Iron Maiden to keep them company. Rap fans were discovering N.W.A. MTV fans of the band were being entertained by Bon Jovi, Poison, and Motley Crue.

What’s a band to do? If you’re the Beastie Boys, you go to Los Angeles, experiment with a lot of psychedelic drugs, hire an unknown producer team known as the Dust Brothers, and overdose on pop culture references. At a time where the ’70s were despised, the Beastie Boys created a sample-heavy love letter to that decade. Their follow-up to the number-one selling Licensed To Ill only made it to Number 14 on the Billboard charts. It would take almost five years before fans discovered what they were missing.

​Even people who refuse to sway from “the only band that matters” label bestowed upon the Clash have problems with the band’s exit. Combat Rock may have dominated MTV, but most fans put the album on the second-tier of Clash favorites. But had the group chosen to end their run with that LP, few would have said they overstayed their welcome. But like Brett Favre coming back for another season after making it to NFC Championship or Muhammad Ali’s final fights, the Clash thought they had more chances to achieve greatness.

The recordings for the album were legendary for all the wrong reasons. The much-needed melody/abrasive tension of Mick Jones and Joe Strummer was decimated when Strummer fired Jones. Mere months after Cut the Crap was released, the Clash disbanded.

One year before Nirvana’s Nevermind changed the landscape of music, the success of Faith No More’s The Real Thing showed a potential sea change coming. “Epic” and “Falling to Pieces” managed to be both commercially popular and critically acclaimed. One of the most obvious predictors of 1991’s landscape-changing year was how in 1990 FNM’s videos received almost as much airplay as Warrant’s “Cherry Pie” and Poison’s “Unskinny Bop”.

The Real Thing won Faith No More literally millions of fans. Armed with a bigger budget, the band chose to spend its artistic capital by upping the weirdness factor found in Introduce Yourself and in deeper cuts on The Real Thing. The famous inside cover of freshly-butchered beef was a perfect warning for those expecting The Real Thing II. It may have lost FNM the majority of its fanbase, but Angel Dust remains a fan favorite. One year later, Nirvana took the exact same artistic liberties with In Utero.

​Contrary to what critics say, Liz Phair was more than 1993’s Exile in Guyville. That record may have forever defined her career, but most artists would gladly assume the burden of having an album that’s on a shortlist for “Best Album of the Decade” in their catalog. Whitechocolatespaceegg (1998) had a slick sheen to it, but lyrics about maternal anxiety and getting a lecture from a bartender were unmistakably Phair.

In the early part of the last decade, Phair had a choice: continue on her current path in the shadow of the diminishing sales returns of some of her peers (see Tori Amos), or make one last attempt at superstardom. Hiring Britney Spears/Christina Aguilera producers the Matrix resulted in alt-rock fans disowning Phair before her self-titled album was even released. But upon its unveiling, Liz Phair was a debacle. “Why Can’t I?” was supposed to be a smash single, but it served only to be background music in trailers for forgettable movies and TV episodes. Phair even tried to retain her shock value with “H.W.C.”, but the public reaction was more of a bored “eww” than a shocked gasp.

It’s tough to determine if No Code was Pearl Jam’s career suicide album or if that distinction should be awarded to their previous effort, Vitalogy (1994). True, Vitalogy was a commercial blockbuster, selling almost a million copies in its first week and even selling 35,000 copies a week earlier thanks to a vinyl-only release. But something had to alienate fans from snatching up No Code. And while “Better Man” and “Corduroy” remain classic rock staples today, those songs still came from an album whose songs included the accordion-fueled “Bugs” and seven-minute droner “Hey Foxymophandlemama, That’s Me”.

Some fans angry with Vitalogy‘s artistic risks/failures grumbled, “I wish Eddie Vedder would just shut up and rock out.” That wish was granted on the more straightforward No Code. The album may suffer from a painful lack of variety, but it’s hard to not get caught up in the exuberance of “Hail Hail” or the quiet beauty of “Off He Goes”. Credit should also go to drummer Jack Irons for giving some much-needed air to the band’s sound, clearing out the stuffiness of some of Pearl Jam’s previous efforts. At the height of alternative mania, Eddie Vedder routinely wished people would leave him and his band alone so they could just play. With No Code Vedder got what he wanted, and he and his band have not looked back since.

In the mid-’90s, “alternative radio” was saturated with so many bands, it was hard to track which ones were going to go on to future success, and which ones were destined for spots on “I Love the ’90s” compilations. Better Than Ezra, Radiohead, Collective Soul, the Flaming Lips, Candlebox, Beck, Deadeye Dick, Bush, Oasis, and Weezer could be heard in the same rotation. So when it came to a follow-up, 1996 proved to be a far different year than 1994. Hootie and the Blowfish and Dave Matthews were selling, Collective Soul and Better Than Ezra were tanking.

With an improving economy and general angst fatigue settling in, it was easy to see how an album like Hootie and the Blowfish’s Cracked Rear View could sell 10 million copies. It was also easy to see that a follow-up to a well-received, but not “important” album would fail commercially if said album was filled with abrasive, pain-filled confessionals. Pinkerton barely debuted in the top 20 and quickly disappeared from the album charts. In 1996, the only notable appearance Pinkerton received was on several critics’ “Worst Of” list.

And well… you know the rest of the story. Raw, stripped-down music made a huge comeback in the first half of the last decade. Rivers Cuomo’s writing style in Pinkerton became the template for dozens of bands. And despite Cuomo’s public “love/hate” relationship with the album, it continues to reward the band in ways that “The Green Album” and Make Believe never could.

No rock list, good or bad, is complete without a Bob Dylan reference. After Nashville Skyline became another classic in Dylan’s collection, he released a half-baked album of covers and instrumentals. That’s hardly an offense as most longterm artists have done this, but Self-Portrait ran an exhausting 70-plus minutes.

Few albums have done as much damage to an artist as Self-Portrait. The album served as a brutal knockout punch for Dylan during the first part of the ’70s. Subsequent LPs New Morning (1970) and Planet Waves (1974) sounded like efforts by an artist trying to regain his confidence. Dylan would later state that Self-Portrait was recorded primarily to repel listeners, proving Dylan’s well-known capability of being a dick whenever the need arises.

Bob Dylan’s Self-Portrait may have set his career back five years, but Muse Sick-n-Hour Mess Age all but destroyed Public Enemy’s presence in the music world. In the late ’80s and early ’90s, Public Enemy was untouchable when it came to making vital, incendiary, and flat-out exciting music. Fear of a Black Planet (1990) managed to succeed despite the controversy surrounding Professor Griff’s dismissal from the band after his remarks about Jewish people. Apocalypse 91… The Enemy Strikes Black (1991) managed to be a smash despite outrage over the video “By the Time I Get to Arizona”. The main reason for this was because the material in those albums easily eclipsed the controversy that dogged the band.

The same can’t be said for Muse Sick n-Hour Mess Age. Toure’s famous two-star rating in Rolling Stone remains one of the most brutal pans in the magazine’s history. Even with the critical drubbing Muse Sick received, it still produced one incredible jam, the laid back, incredibly catchy “Give It Up”. Unfortunately, the rest of the album lacked that song’s hooks, confidence, and sense of purpose. The band would regain its footing slightly with the soundtrack to He Got Game, but since then, Public Enemy has largely stuck to the underground with albums like There’s a Poison Goin’ On and New Whirl Odor — albums that even some professed die-hard fans may not know exist for purchase.

For an artist as fascinating as Lou Reed, it’s appropriate that he occupies not one, but two slots in this list. There’s no way that a list of career suicide albums could not be topped by Metal Machine Music. Nearly 40 years after its release, it still remains the go-to comparison to any artist’s career-ending album (e.g. With Trans Neil Young may have created his own Metal Machine Music).

The four “songs”, simply titled “Metal Machine Music Part 1-4”, were devoid of hooks and tunefulness, and were generally considered to be white noise. So derided was the album that its developed its own cult as people have defended Reed’s work as being a precursor to industrial music. One of the biggest legends attached to Metal Machine Music was that some fans returned it to record stores, worried that they received a defective vinyl copy. It’s likely that another reissue of Metal Machine Music will come in a few years, which is justifiable, given the album’s legendary status. But few records deserve the “easier to admire than love” label than Reed’s “was it or wasn’t it a joke?” exercise in audio sadomasochism.