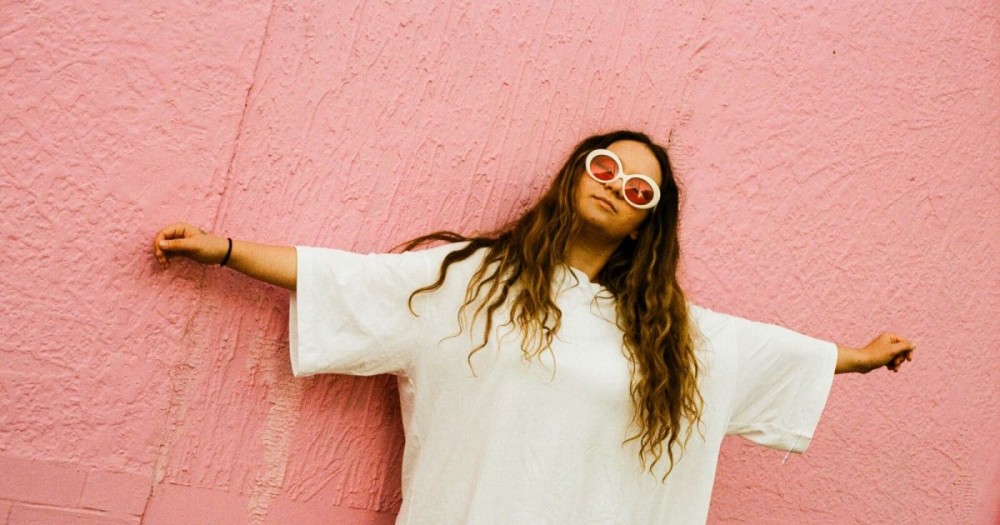 In an nondescript building in Surry Hills, Mallrat and I are left to our own devices.

Let’s consider her year. She’s nabbed sets at monster festivals like Splendour, Listen Out, and the first ever Sydney City Limits. She’s been on tours galore, having just led an all-female pack artists on her own Better tour, and lent support to the Peking Duk boys on the road. However, Mallrat is still unexpectedly, the epitome down to earth. “At Spilt Milk, I had to leave halfway during Lorde, which was really upsetting, but I got to see a little bit her and I cried. She’s really one my favourite artists. It sounds selfish, but when I listen to her music I feel like she wrote the song for me, and I feel like a lot people feel that way which is the magic her music. She writes so eloquently about being a teenager and being in suburbia, that transition moving into the public eye. Being a teenager is great, but you can really feel like an alien sometimes.”

That subject is something Grace Shaw, now 19, is overcoming herself. Earlier in the year, she made the move from Brisbane to Melbourne, having put away her school uniform for the last time just 2 years ago. Amongst the stress the latter years high school, she wrote and recorded demos for her first releases, produced with the help Adelaide’s Tigerilla and many others, sourced from Soundcloud. “School was really cool in that I realised I wanted to do music, and then it was the strangest experience ever because it was so frustrating knowing that I didn’t need any the information I had learnt anymore, or that the work was unnecessary. Having to do assignments was really annoying because I wanted to be writing music, and it was just taking away time from it.”

Out the shadows the internet, Mallrat emerged in 2014, at the ripe age 16. Her skills and self awareness are beyond her years, but within her music, she doesn’t try to seem older than she is. It’s open, at times confident, at times self-doubtful, and always candid about the teenage experience and what surrounds her. “I think that I write honestly, and people can hear it.” She’s not wrong. She knows how to nail down very specific moods to the tee. Be it nostalgia, social awkwardness, or growing up, she does it without being overbearingly obvious in any element. It’s resonated with the world. “I don’t mind what people feel when they listen to my music, but if they feel something, anything at all, that’s really good.  Or if they remember something, a person or a situation, that’s the best thing ever. I don’t know why I want that, but yeah.”

And she’s versatile. Her music floats in a limbo between rap, pop, and electronic. In her singles, she’s moved progressively from a rap-singing style, to a st-spoken and melodic one. From there, she’s collaborated with PC music makers Oh Boy and Donatachi, and now taken a lean towards the pop world with her latest acoustic-driven single, ‘Better‘. In the most wholesome video you’ll see this year, Mallrat dances through fields and rides horses in a sun-dreched retro film style. “I really love horses, and so the video was the perfect excuse to spend a couple days hanging out with them.” she says.

“If we were to open up your preferred music app, what would be in your most recently played?” I ask. Pulling out her phone, we dive into her wealth Spotify playlists. “I make playlists every month. I would make them public but there’d be too many. I’m loving Slow Hands by Niall Horan, it’s actually such a jam. I’ve also got ‘Havana’ by Camilla Cabello, ‘Sorry Not Sorry’ by Demi Lovato, the new Tyler The Creator album, ‘Flower Boy’, ‘Confidence’ by Willow Beats, and then I have a Sleep playlist for when I’m on a plane or going to bed.” she says. With that range influences, it’s clear that Mallrat will never be your average pop artist.

In November, Grace made made a trip to Japan with her touring DJ and long time m8 Denim Boudis, for pleasure, not business. “I loved being in Tokyo, specifically Harajuku and Shibuya and seeing how cool everyone was dressed. They all just looked so cool and the shopping was awesome, I bought so much stuff. It’s so inspiring to be around people who dress exactly how they want to. I feel like sometimes in Australia and especially in Brisbane, people dress down a lot, so seeing that is really cool.”

“I’m inspired 90’s fashion, 100%. I love what cowgirls wear, big boots and big hats, I love looking at high fashion, and street style in Japan and Korea, although it’s pretty streetwear, hype based lately. I love kids clothing, the way that the patterns are so fun, and I love watching kids put outfits together, it’s so cool. They choose exactly what they wanna wear, it could be like a tutu and sneakers paired with a purse with a toy dog in it. When you get dressed in the morning, you can put on a bit a character for the day, and for me that’s so exciting, ’cause it helps me to be more confident if I can channel a certain style like, “This makes me feel smart,” or “This makes me feel like a rockstar.”

On being a young, successful woman making music in a boys club industry? “I’ve been really lucky to not have a lot dismissive experiences. There’s only been a very small amount times when I’ve felt that, and I’m not the sort person to feel like a victim about it because I usually have better people to work with anyway so I can just go “Alright, have a nice life, I’m gonna go work with someone else now.”

“In America I feel like the culture is really different,  people are very in their world, they’ll work on a big hit that goes really well and then they think they know everything. That’s a huge generalisation, but I’ve definitely come across people who think like that. When I did some sessions over there, there were a few moments where I was getting a little bit sad, because I was like, “These people actually don’t care”. And when you’ve committed a whole day to spending it the studio with them, it’s pretty annoying when they don’t wanna listen to what you have to say. I think it’s just a cultural, L.A. thing though. Despite it, she says she plans to move to Los Angeles this year.

Mallrat has long teased her next EP, which she says she’s just finished up, set for release in the early months this year. “I wrote and oversaw everything, so kind the executive producer.  In terms working with producers, it’s been something I’ve been working on in my own time to be able to produce my own stuff, but more so learning about how to talk to producers. When you start, you don’t know what any words mean. You don’t know what a compressor is, you don’t know what reverb is. When I started, I was in that position. I knew how to write lyrics and what I liked,  but I didn’t understand the technical side things, but I’ve learnt a lot about that now which has been really good. All the people I’m working with have been teaching me stuff.  So now I think I’m in a good position to be able to do that myself. I don’t really wanna do it all by myself, but it’s nice to be able to speak confidently about it.”

It’s safe to say the world will be here waiting.

Mallrat is touring around the country in January 2018, and you can grab more information .