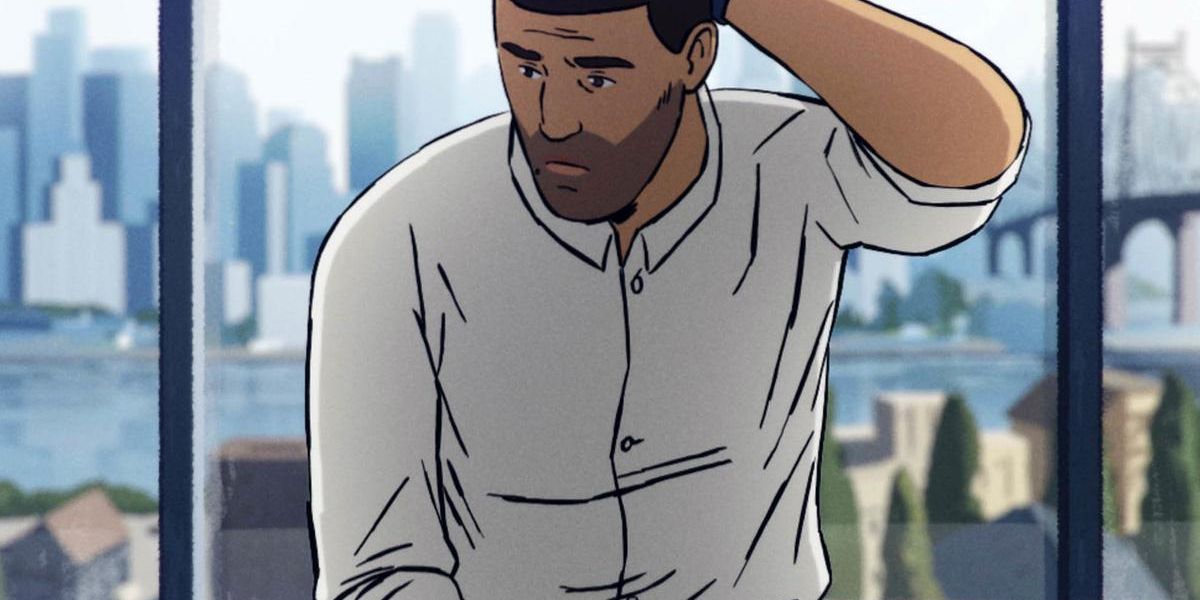 It’s already one of the most lauded films of this year’s Sundance and, thanks to Neon, the first film to be acquired for distribution from the festival. Although it delivers a politically relevant, conversation-sparking tale about a gay Afghani refugee’s perilous journey from Afghanistan to Russia to Denmark, Flee is surprisingly hard to talk about.

That’s because the refugee is the director’s longtime friend Amin (names are changed to protect the anonymity of those described), and the film—a strikingly animated documentary—is so conversational, intimate, and detail-driven in its approach to Amin’s life story that you can’t help but think that everything one could say has already been said by the film itself—about the value of life, about the arbitrary inhumanity of immigration law, about resilience and family, borders, and identity. What could there possibly be to add?

Flee depicts the refugee experience in color and motion, glimmering with fluid detail and memory that makes it feel dangerously tangible, even behind the veil of its animation. From the start, when Rasmussen asks Amin what home means to him and he replies, “Home? It’s someplace safe,” Flee is devastating. Then, in the following minutes, as Amin describes growing up in Afghanistan in 1984, wearing his sister’s dresses and dancing in the streets to cassette tapes of American synthpop music, his joy comes to life before our eyes. It becomes a cinematic reality.

The animation conceit is another protective measure; Amin’s refugee status would be threatened if the truth of his identity or his story—that his family was all killed—was revealed. The art style itself is refreshingly spare and minimal to accommodate that goal, paced at a floaty and slow frame rate, and drained of identifying detail. It’s anonymizing, but strangely, it’s also universalizing. Anyone can identify with Amin and his family because they look like everyone and no one.

Flee‘s details are what captivates. In his interviews, Amin recalls a full and vibrant childhood: flying kites with his brother, playing volleyball, his mother stroking his hair. His story starts turning harrowing when, while seeking asylum from tumult in Afghanistan, his family is granted access to post-Soviet Russia on tourist visas. There they are imperiled at every turn by a corrupt police force that harasses them for bribes whenever they step out onto the streets, but those wholesome thoughts that shepherded us into Amin’s life remain potent enough to help us appreciate the importance of his journey. It reminds us that the refugee struggle is not in the running as much as in finding a home again.

There are scenes in Amin’s story where the animation shifts even further into abstraction: grainy, impressionistic sketches reserved for only the foggiest or most intense memories, as well as the imagined horrors suffered by his family members. This style is used for the disappearance of his father in Afghanistan, and for his sisters’ voyage to Sweden in a shipping container arranged by human traffickers. In these moments, the film is stunning and terrifying, engaging a nightmarish depiction of the ways trauma corrupts memory and feeling, distorts beauty, and erodes happiness. The transition is breathtaking every time.

In Flee‘s present day, Amin lives in Copenhagen with his boyfriend and is considering traveling to America to work on postdoctoral research at Princeton. They have a cat and are house hunting in the countryside. Amin has his reservations; the open fields remind him of his troubled first months in Denmark. If home is someplace safe for Amin, he may never truly find it, the film hints.

In those moments of dread, Flee reminds us that to be a refugee is to be an individual trapped between incomprehensible and archaic institutions, all competing to throw you away with the most efficiency and efficacy. It’s the criminalization of survival, making life itself feel like a sin worthy of guilt. Truth, for Amin, is as good as dead, so it must be inhibited and suppressed. In a more just world, things would change as a result of hearing these witness accounts, but they are pressed deep into the shadows as a function of the system, so nothing ever changes. More lives are fed into the machine, where no one can see.

Flee is a truth that needs to be heard. Rasmussen delivers Amin’s joy and panic, triumph and misery with full-hearted artistic clarity, and at 90 minutes, it’s impressively dense with emotion and ambitious craft. It’s multidisciplinary and multidimensional, a cohesive feat of storytelling that will find its audience immediately. The animation is not distancing but illuminating, bringing sound and movement back to Amin’s memories when institutions force them into silence and darkness. As hard as it is to talk about, it can’t leave your mind. It’s a biographical monologue that needs no response, no answer but action. Flee is not just who we are, but who we could be.