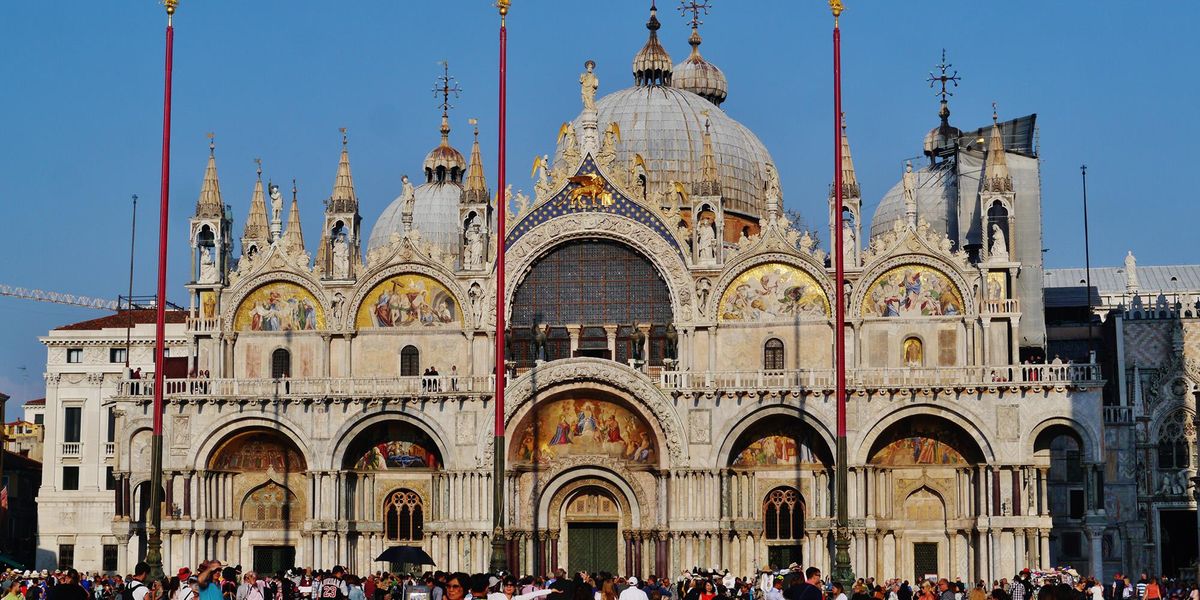 The title of Diana Darke’s 2020 book, Stealing from the Saracens: How Islamic Architecture Shaped Europe, promises the reader that they are about to embark on a provocative, revisionist reading of architectural history. The choice of words is meant to prick sensitivities, announcing that a crime has been perpetrated (‘Stealing’) while simultaneously stripping ‘Europe’ of its historical agency (it has been ‘shaped’, it did not shape itself). The blurb and introduction both reinforce this impression, attacking the ‘current European inward-looking mindset’ of those who are ‘increasingly airbrushing from history their cultural debt to the Muslim world’ so as to ‘revive a Christian national identity’.

Readers expecting a polemical approach, however, will be disenthralled. Darke’s book is a sober, balanced account of Early Medieval influences from the Middle East, particularly Syria, on Gothic architecture in Europe. She identifies styles and developments from pagan temples under the Byzantine Empire through Islamic civilisations, and traces their transmission into medieval Europe through trade, migration, and military conflict. Stealing from the Saracens treats a topic that has little cultural currency in a way that is enlightening and accessible, and her claims are technical, well-researched, and convincing.

They are also fairly uncontroversial. Though Darke predicts in the conclusion that her book will be received with ‘howls of protest’, any reader with a basic understanding of Early Medieval history should know the importance of the Islamic Golden Age in Europe’s cultural and scientific development, and that the Hellenic heritage, key to the Renaissance and the Enlightenment, was largely rediscovered, thanks to Arabic translations and applications. That the great “Oriental” influence of the Middle Ages should have ramified into architecture seems common sense, although the specifics are not nearly as widely known.

Considering that the aforementioned introduction makes up less than two percent of the book’s very strong and unproblematic content, it may seem unnecessary to even give it space in the review. And yet I find its stated agenda impossible to overlook. It comes at a time when Europe is desperately looking for a language to deal with Islamophobia and racism in general, and it deliberately situates the book at the centre of this cultural and political debate. Thus, Darke (and her editors) invite us to judge this work not merely as a good – in parts even excellent – account of architectural history, but as relevant, in-depth cultural criticism.

Viewed from this perspective, Stealing from the Saracens seems clumsy at best, and dishonest at worst. The entire premise, that people do not know about the Middle Eastern influence on Gothic because of Islamophobic prejudice or ‘airbrushing’, is glib: the history of architecture is a highly specialist field of knowledge, not pop culture. I have lived in Rome, Paris, and London and have received an education in the humanities, yet if you asked me to account for the history of the architectural styles behind the Colosseum, the Eiffel Tower, or the Gherkin, we’d be having a very short conversation.

For most of the book, Darke flies lower than she shoots with the introduction, and sticks to the topic of architecture without venturing into cultural criticism and historiography. Those times she does attempt to grapple with these fields, her approach is astoundingly superficial. She praises the Roman Empire for its tolerance to outsiders – ‘no “go back where you came from” mentality’, she cheers – but glaringly overlooks how many of these outsiders came to Rome in chains. (I expect plantation owners in Virginia never told their slaves to ‘go back where they came from’, either.)

Furthermore, she is blind to the irony of denouncing ‘our Eurocentric view of the world’ while repeatedly referring to Europe’s Early Medieval history as the ‘Dark Ages’, an expression that has long been rejected by historians as a Eurocentric cliché. She declares herself to be ‘surprised, not to say shocked’ that ‘the Spanish appear unwilling to celebrate their Muslim past’ when that past involved being invaded, subjugated, and enslaved. That the Umayyad rule in the Iberian peninsula was on the whole benevolent and civilised for its time is a matter entirely beyond the point, as was their religion. Look at how the Romans are represented in anything from the French Asterix comics to Germany’s Netflix series, Barbarians, and it becomes quite clear that no matter how ‘European’ the invader may be, people simply do not celebrate being conquered.

Aside from being dubiously articulated, the introductory argument (that Europeans have falsified a history of imperialistic plundering from Islamic civilisations) appears to be perplexingly contradicted by the book’s own content. Darke’s claim, in the conclusion, that her ‘purpose has been to show that no one “owns” architecture, just as no one “owns” science’ seems to explicitly undermine the title ‘Stealing from the Saracens’ – as does the convincing demonstration that Islam exerted its architectural influence primarily through trade, imitation, and Muslim conquest of European territory (mostly Spain), rather than via Crusader invasions of the Middle East (she calls these ‘the least important’ factor).

She often mentions that Europeans have methodically erased the influence of Islamic culture (the examples she provides of this are few and all date to the medieval era), but throughout the book, she quotes an almost overwhelming number of European architects, artists, and scholars from all periods of post-Renaissance history who studied and recognised just that: Christopher Wren, Edward Pococke, Jacques-François Blondel, Robert Wood, James Dawkins, Count Melchior de Vogüé, John Ruskin, William Morris, Georges Tchalenko, Wolfgang Born, Oleg Grabar, RH Hamilton, Felix Arnold, Robert Hillenbrand, Ignacio Peña, Michael Meinecke. For whatever reason, she very seldom quotes Islamic scholars themselves.

Darke is, of course, completely right in denouncing Islamophobia as a critical problem in Europe. But dismantling it requires a sensitive, nuanced take that acknowledges and respects the complexity of the questions it is entangled in – immigration, populism, terrorism, medieval history, international diplomacy. Perhaps most importantly, a language to tackle specifically European racism must engage with the continent’s enormous internal cultural difference, and the way questions of race and identity get scrambled as you cross borders.

I feel this is the central problem of Darke’s approach. She is taking the language that postcolonial theory employed to describe the British Empire plundering, colonising, and exploiting smaller kingdoms, and using it to describe the relationship of European to Islamic civilisations. This doesn’t really work, and it seems rather belittling to polities that were not passive recipients of European imperialism but powerful empires in their own right, which competed with and very often surpassed Western competition.

As importantly, English-born Darke frequently seems to struggle with her culture’s tortured relationship with Europe. Brexit, that divisive, destructive triumph of far-right populist propaganda in Britain, had much to do with the left’s inability to mount a robust defence, which in turn had much to do with the left’s lack of a positive language to speak of Europe. Rather than connoting it to a project of peace, open-borders, and unity, the British left continues to see ‘Europe’ as exclusively a signifier of imperialism, neoliberalism, and racism, a view that Darke clearly espouses: ‘The concept of Europe was largely the invention of the Renaissance imperialist mentality.’

Europe has very serious problems with racism and Islamophobia, problems that are too local to be solved by simply generalising the tenets of British anti-imperialism or importing those of American activism. We need our own anti-racist language, and what Stealing from the Saracens truly reveals is how far we must still go to find it.