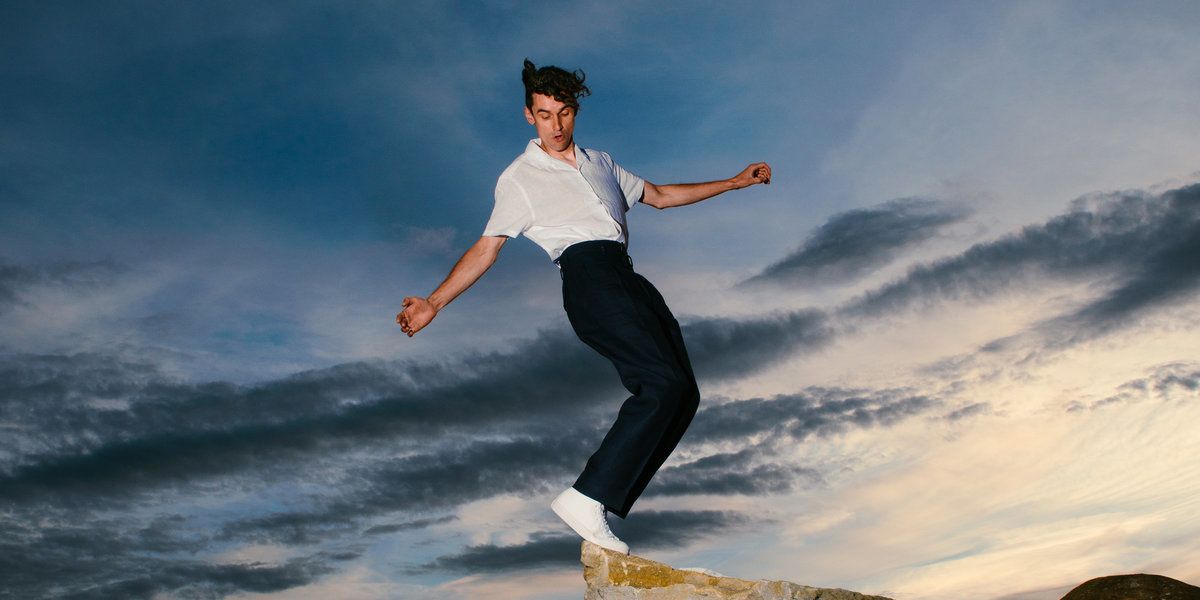 Powys 1999, Stats’ second album, and second album in two years, features ten songs that always feel like they’re gliding on a dance-rock groove, even when they actually aren’t. Ed Seed, the band’s main creative force, made a name for himself as a touring guitarist with acts like Dua Lipa and La Roux, but Stats is where he goes to make his own music. And that music is catchy and clever and always glossy.

The first single, “Naturalise Me”, bumps along on a simple mid-tempo dance beat, accented by a little glitch synth noise. A basic bassline also pulses through the song’s opening, while Seed sings in a breathy upper register. After about 20 seconds, the track starts to add a collection of synth sounds that open up the music into a pulsing dance groove. There’s a buzzing low end, a swirling, arpeggiated high end, and a tambourine, each contributing to the song’s feel. Seed’s vocals rise into a falsetto climax to the verses and stay in that range through the chorus. It’s a fun track with strong hooks, and that is consistent throughout the album.

The second single, “Old Flames”, is much slower, with a sparser arrangement and an emphasis on wordplay. It retains the buzzing low-end synth sound from “Naturalise Me” but opts for a slow, straightforward kick drum-snare beat. It uses warm piano chords, tubular bells, and a rounded bass sound to support its melancholy tone. Seed sings about being frustrated by regularly meeting his significant other’s exes, who are invariably people he’s never even heard of. “You’re burning me with these old flames / I never even know their names / And I would if you still feel the same / There’s no smoke without old flames.” The song is interesting because Seed seems aware that he’s ridiculous, and yet. After all, it keeps happening, and he still wonders if he’s ridiculous.

“Out of Body” and “The Truth Is Naked” are the big dance tracks on the album’s back half. The former takes its time getting going, piling on the synth chords under Seed’s voice for a full minute until the synth bass comes in and finally gives the song a pulse. Once that pulse starts, the only time it stops is in the second chorus, which interestingly serves as the song’s bridge. “The Truth Is Naked” begins with minor-key piano chords and both Seed and a female vocalist speaking in unison. Then it launches right into the chorus, “The truth is naked / But it’s complicated / Do you like to give it out / Or do you like to take it?” The entire song is built around the chorus, which repeats for most of the track. The verses, such as they are, remain spoken, with another memorable bit of wordplay anchoring verse two, “So when the man at the desk asks if we have reservations / I say ‘Well, sure, but it’s an adult situation.'”

Then there are the songs which don’t have a dance beat but still somehow feel like they do. “On the Tip of My Tongue” has a simple synth bassline and an acoustic guitar and no percussion of any kind, but the interplay between the synth bass and acoustic strums gives the song the same sort of momentum as Stats’ beat-heavy tracks. Seed also distinguishes this song by doubling his vocals in a low register, which is the opposite of most of the album’s backing vocals. “Travel With Me Through This Ghost World” is mostly a voice and a simple piano chord pattern. The title is about 80% of the song’s lyrics, and yet Seed keeps it compelling for three-and-half minutes, eventually adding a distorted synth countermelody in the song’s back half.