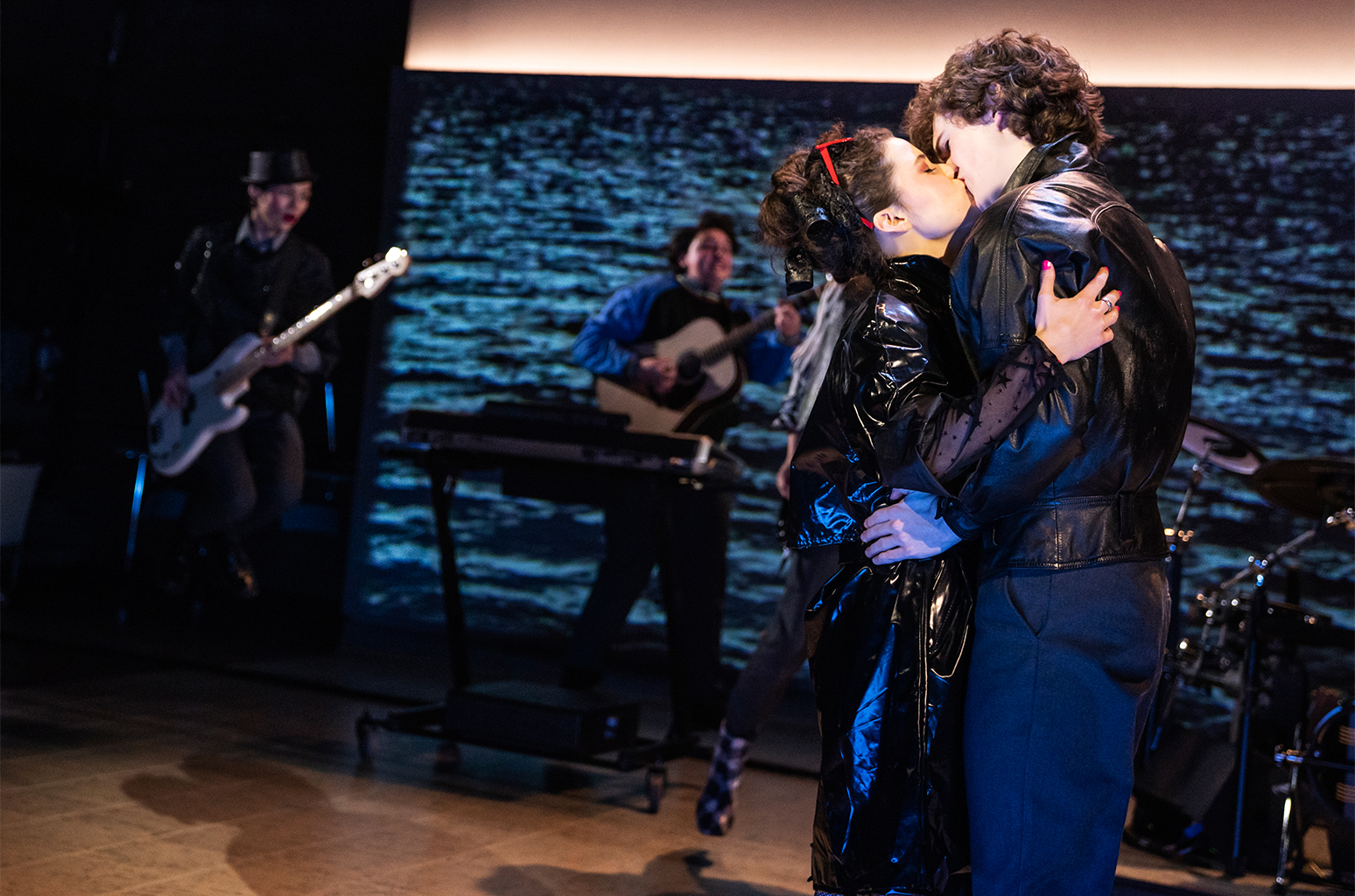 Writer-director John Carney's background in Irish rock band The Frames has informed much of his screen work, exploring the power of music to liberate and connect us in films like Once and Begin Again. He drew on experiences from his own youth in economically depressed 1980s Dublin in the 2016 feature Sing Street, a let's-make-a-band high school story that doubled as a valentine to the flamboyant new wave Brit pop of the period. Playwright Enda Walsh and director Rebecca Taichman have remodeled that source material into a spirited stage musical, which feels like a work in progress but has no shortage of winning elements.

Like the theatrical version of Once, which went on to win eight 2012 Tony Awards including best musical and was also scripted by Walsh, this new project has been incubated at New York Theatre Workshop. But unlike Once, which already was quite polished in its off-Broadway debut, Sing Street is still finding its footing, with too many underdeveloped characters and a shakily plotted second act. The songs are fun, however, and the scrappy, rough-edged quality of the staging is an appealing fit for the central storyline of a 16-year-old boy assembling an ad hoc band, initially as a ruse to get closer to an enigmatic beauty.

It's 1982 and the once-comfortable family of Conor (Brenock O'Connor) has hit hard times, like much of the country as the Irish unemployed head for London in large numbers in search of work. "It kinda feels like it's not a country for young people, ya know," says a school-age interviewee heard on a news clip in the opening moments, likening the mass exodus to her grandfather's migration to America in the 1950s. The uncertain promise of that escape is represented in the chief element of designer Bob Crowley's spare but effective set, a backdrop rendering of the Irish Sea with an empty horizon.

Conor's father Robert (Billy Carter) is an architect unable to find a job in a country where the building industry has collapsed; his mother Penny (Amy Warren) is working part-time, seeking distraction from an unhappy marriage in a clandestine relationship with her boss; and older brother Brendan (Gus Halper) is a stoner who has dropped out of college and is now in too much of a funk to leave the house. Since taking his sister Anne (Skyler Volpe) out of college is not an option, Conor's parents cut costs by moving him from his expensive private Jesuit school to the state-run Christian Brothers school on Synge Street.

From day one, Conor clashes with authoritarian headmaster Brother Baxter (Martin Moran), ostensibly over the new student's failure to comply with the regulation black shoe code — his family can't afford them — though also because of the priest's thinly veiled contempt for Conor's background in a posh school run by another branch of the Church.

But Baxter is one of the weakest points of Walsh's book, not helped by Moran's one-dimensional performance. He plays only the anger, never the motivation. For a man of the cloth so abusive of his power ("Sure, why would I expel ya — when I can own ya?," he sneers at Conor), we learn nothing about what made him that way. A confrontation with feisty Sandra (Anne L. Nathan), a piano teacher whose son Eamon (Sam Poon) comes out of his shell once he joins Conor's band, is a start, but the scene needs more indignation and blunt home truths hurled to fully register. And when the inevitable rebellion happens, and the band's exuberant performance in the school hall silences Baxter's sputtering outrage, the moment is too poorly elaborated to be satisfying.

The show is on steadier ground with the band's formation, which, much like the film, evokes the idea of a junior version of The Commitments. Sure, it's derivative and doesn't match the gritty milieu of the infectious 1991 screen hit, but what that movie did for white soul, Sing Street does for the breezy escapist pleasures of '80s English pop.

Much of that inspiration comes via Brendan's almost scholarly appreciation for bands like Duran Duran ("These lads are making ridiculously funky music — you can hear it through John Taylor's bass, Nick Rhodes' twangy keyboards and Simon Le Bon's exceptional baritone”) and Haircut 100 ("Only a group of lads from a grubby suburb of South London would have the audacity to introduce the 1980s to a fuckin' xylophone. And not satisfied with this level of happiness, Haircut 100 throw this jazz-funk clarinet at ya as well!"). As someone who was completely intoxicated by that band's effusive energy and their preppy look in chunky Aran sweaters, I laughed out loud at Brendan's observation: "It's perpetual summer for these lads, even if they are all wrapped up in woolly jumpers and braces — they are the gods of joy."

Songs by those bands are sampled in the show, along with those of Spandau Ballet, Japan, Orchestral Manoeuvres in the Dark and others. The original tunes, many of them heard in the movie, are co-written by Carney and Gary Clark (the former frontman of late '80s Scottish band Danny Wilson) in the style of the period, often dipping into affectionate pastiche.

Conor concocts the group out of nothing when he meets Raphina (Zara Devlin), a slightly older would-be sophisticate with a troubled family background that she hides behind shades and a too-cool demeanor. When she explains that she quit school to do "a little bit of modeling," Conor impulsively offers to feature her in his band's music video. The fact that there is no band barely registers as an obstacle.

He gets help assembling a lineup from Darren (Max William Bartos), a surprisingly resourceful self-described "business solutions" specialist in his class, and then acquires a songwriting collaborator in the aforementioned Eamon. The debut tune that follows, "The Riddle of the Model," is amusingly cheesy in its rudimentary assessment of the supposedly "indecipherable" subject, and the video shoot is a hoot, with the band members experimenting with guyliner and eyeshadow, having ransacked the wardrobes of their sisters, mothers and grandmothers for flashy statement pieces.

Designer Crowley keeps coming up with new and more hilarious outfits throughout. I especially loved the Spandau-style kilts. There are also funny low-tech takes on '80s music-video tropes, like Darren spritzing mist from an Evian atomizer in place of a smoke machine.

Playing Brendan, Halper is one of the standouts of a talented young ensemble who throw themselves into their roles with gusto. (Almost all the cast double as onstage musicians.) The actor brings such depth to depressed Brendan's battle to champion his brother's self-discovery and possibly liberate himself at the same time that the unorthodox decision to give the musical's closing number, the lovely "Go Now," to this secondary character actually pays off.

But if the show is to have a future commercial life (a Broadway move has been rumored), Walsh and Taichman need to bring more definition to the individual bandmembers. Despite the appeal of the young actors playing them, both Darren and Eamon are only thinly sketched. The rest are fairly interchangeable, though Gian Perez as cocky guitarist Kevin does get to rock some amusingly outré androgynous looks. One promising character is Barry, a closeted gay thug whose messed-up home life spurs his aggressive behavior. Johnny Newcomb nails the punky lad's clash of hostility and vulnerability, particularly in poignant moments where he responds to the nurturing influence of Sandra. Nathan, a veteran of the original Once cast, is also terrific in that role, though both these characters cry out for more stage time.

The main area in which there's room for improvement is the messy story development of Act II. The impact of a handful of good songs — notably the catchy "Drive It Like You Stole It," about seizing life with both hands; "Brown Shoes," an anti-establishment rebel yell that proclaims, "The boot's on the other foot now;" and the yearning "Dream for You" — is diminished by chaotic plotting.

As the band gets tighter, they work toward the goal of The Inner-City Dublin School Band Contest, which Brother Baxter grudgingly grants permission for them to compete in before reneging as a disciplinary measure against Conor. These scenes of conflict that should drive the story need greater force.

The burgeoning romance between Conor and Raphina is nicely played by O'Connor and Devlin, who respectively hail from England and Ireland and are stronger actors than singers — merely adequate in the latter department. Their love story is nudged along in halting fits and starts, cramped by the threat of Raphina taking off to England with her unseen older boyfriend. This thread, too, could be more robust, but the gentle handling also has its charms. Even when it veers toward corny sentimentality, the show's thematic focus on the resilience and hopefulness of youth exerts a persuasive pull. That makes you root for this sweet but not yet quite substantial enough musical to maximize its many assets and become a real contender.

This article originally appeared on The Hollywood Reporter.