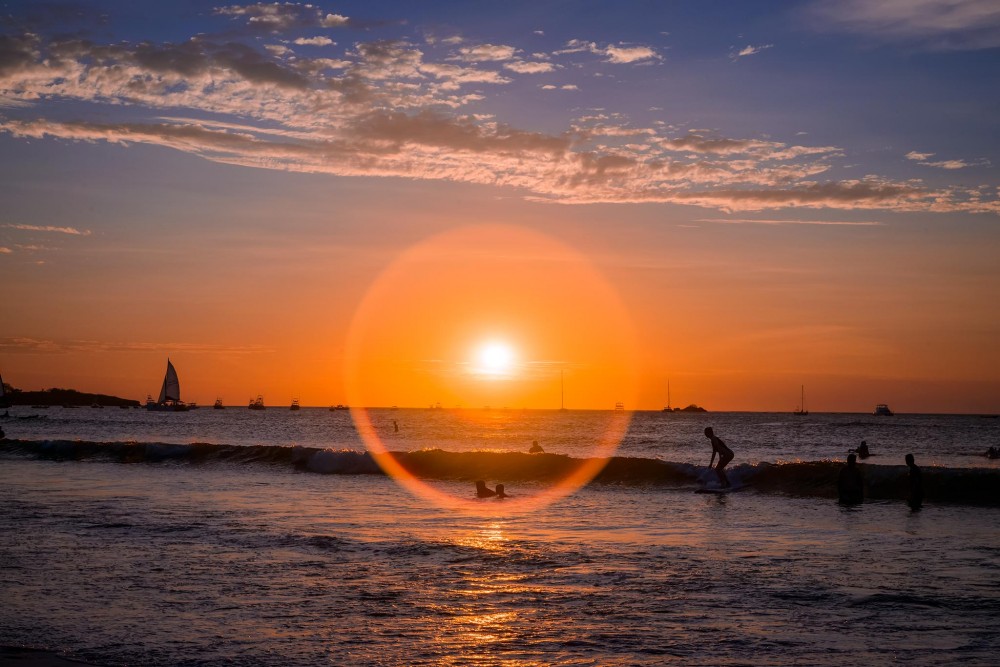 Such a feat is not an easy one to accomplish — especially in an increasingly saturated festival market where success rides a fine line talent booking, production, and risk-taking. Nailing a major festival production can take years, even with a strong team and a prime location. However, Ocaso only took two editions to get its footing in the contemporary event-organizing arena.

What originally began in 2017 in Tamarindo as a free event has since transformed into an unparalleled, explorative venture diving deep into the realms underground house and techno. This year, Ocaso Festival focused on delivering a more concise lineup house and techno artists than it had last year. 2017’s lineup boasted artists like , , , , , , Anthony Attalla, , , and . Although 2017’s curation doesn’t appear to be any less concise than this year’s artistic assemblage, the main shift for 2018 was allowing extended DJ sets from a plethora acts throughout the weekend.

Found on the 2018 lineup were underground house and techno pioneers like Doc Martin, , , and , plus live sets from and , as well as a local takeover from Costa Rican DJs like Javee, Oneiro, Maria Wabe, Samu, and more. The rambunctious, SoCal party crew featuring , , , , and also held it down for two surprise nights the festival.

Tamarindo, Costa Rica’s appeal lies in a multitude ferings: great weather year-round, a party atmosphere near the beaches, ease air travel, and a somewhat equidistant geographic location to major markets such as North America, South America, and Western Europe. Aside from the music, the Tamarindo Playa can be explored in a number ways, from snorkeling the coral reef to scuba diving, surfing, or zip lining through nearby jungles. For those looking to err on the side relaxation, Tamarindo fers luscious, local cuisine, as well as a superfluous number bars and spas.

What Tamarindo’s nightlife lacks, one could argue, are the gargantuan dance venues similar to those Ibiza. Though Costa Rica’s San José does bolster an array nightlife institutions and party organizations, Club Vertigo and ANTIK being on the leading edge the scene, the city is significantly less developed than much the leading destination festival world. Rolling green mountains stretch beyond the city limits, where the jungles carry on as far as the eye can see. In this regard, one could argue that Costa Rica is ripe for its growth in the scene, but cities like Las Vegas and Dubai are light-years ahead. Even other “would-be Ibizas” such as Punta del Este in Uruguay, Cyprus, Bali, Romania, and Croatia, are too.

Though it’s important to understand: Costa Rica’s not aiming to be “the new Ibiza.”

Unlike other destination festivals, Tamarindo’s Ocaso Festival points to a budding underground and a scene whose deserving musical and cultural celebration is deeply embedded in the country’s very livelihood.

Costa Rica will likely not in two lifetimes approach what Ibiza has done for the dance music — it’s unlikely any new “hotspot” will, for that matter. Providing a niche destination and unique attraction between that a boutique and underground festival experience for the scene though is growing increasingly appetizing. To this effect, Costa Rica is well-positioned, and Tamarindo’s Ocaso Festival is leading the front.

Having organized underground warehouse style shows in the early nineties, “We have always had house and techno as our main attractions but added genres like hip-hop, drum & bass, and jungle at some the bigger events,” the sonically well-rounded founder Ocaso Festival is unequivocally rinsed in the underground scene.

After traveling to Acapulco Mexico in 2001 for an event called the ACA Soundfest, Ellis became drawn to the hedonistic and ground-breaking open-air possibilities a music festival could fer, and so he incorporated these elements into Ocaso.

It was “unlike anything I had ever experienced,” he’d said ACA, also telling the  prior to Ocaso, “I wanted to find a similar setting for my own destination festival. Removing people from the everyday stresses life, and immersing them in an isolated setting produces a truly paradisaical experience full freedom. In my first full night in Tamarindo a few years ago, I knew then Costa Rica was going to be home for Ocaso.”

After traveling extensively for a few years, Ellis remembered how much he enjoyed good music and its versatility no matter where he was.

“We just wanted to throw a destination festival to give people the opportunity to listen to world-class techno and house music in some the most amazing locations on the planet,” Ellis told us the mission behind Ocaso.

To pull f a world-class party, Ellis and the Ocaso organizers capitalized on a threefold relationship with the natural environment.

Beginning with the beach, the lifeblood Ocaso festival was the relationship cultivated between the attendee and musical setting. Named after the Spanish word for “sunset,” it was incredibly apt that Ocaso’s second incorporation an environmental element was a driving force the country’s ethos: its sunsets. Ocaso’s decision to move from the opening party on the beach to a rotop a hotel for its days and final evening was a masterful one. In doing so, they displayed a threefold understanding the need to entertain, but also to delight with the country’s natural beauty, and aid in attendees’ cultivation a memorable experience with one another.

The most integral piece Ocaso’s environmental planning though was its ascendance into the Costa Rican jungle for two nights. A sublime union between attendees and their environment, Ocaso’s underground roots were elongated with the use the “La Senda” venue. Ocaso’s organizers paved the road leading from Tamarindo to La Senda, which was previously a dirt path, and quite literally allowed attendees to descend into the festival’s jungle accolade.

Citing natural beauty as one the number one attractions Costa Rica, Ellis’ move Ocaso to a natural amphitheater and next to an open Labrinyth structure for two evenings was immensely felicitous.

Besides the musical venue lied the Tamarindo Labyrinth, which according to both its website and locals, serves as “a maze you get lost in] and have to find your way out, a labyrinth has only one path which symbolizes our life’s journey and takes us inward guiding us to find out who we really are. ”

Translated into the design a labyrinth by Ronald Esquivel, the jungle’s labyrinth uses sacred geometry and the number three, uniting two opposing centers — the feminine and the masculine into a third center, the Vesica Piscis — which is believed to be the point creation.

In sacred geometry, the Vesica Piscis is the passageway from “the One to the many,” or the portal through which all forms and patterns our universe are created. Since symbolism flows so deep within many, this figure is intended to allow inner expansion, exploration, inspiration, and spiritual self-discovery.

Respectively, Ocaso didn’t disrupt the landscape La Senda, instead, they laced the jungle stage beside it, but the natural labyrinth’s proximity to the music and the natural amphitheater where it instead took place still beckoned an embracement the country’s holistic energies — indeed propitious to the festival’s spiritual ideology.

Other than Ocaso’s optimal choice venues, and its oneness with its destination, the festival soared in its palpable energy, although such a feat is rendered impossible without a diverse booking world-class acts like Doc Martin, Claptone, , Desert Hearts, and more.

Ocaso’s not looking to make any drastic changes in its programming in the years to come, though Ellis hopes to continue to build on the vibes that have exploded since they began.

Ultimately, it’s the energy the underground that will keep people coming back to Ocaso. After all, that’s what’s kept the underground scene bubbling beneath the surface worldwide. With both Ellis’ and Ocaso’s investments in the Costa Rican scene, as well as their dedication to creating goosebump-inducing moments, and allowing the spaces to do the rest; its no surprise that Ocaso will be returning to Tamarindo next year with the same devotion to its natural environment, and most importantly, with the same love for the music that keeps it going.