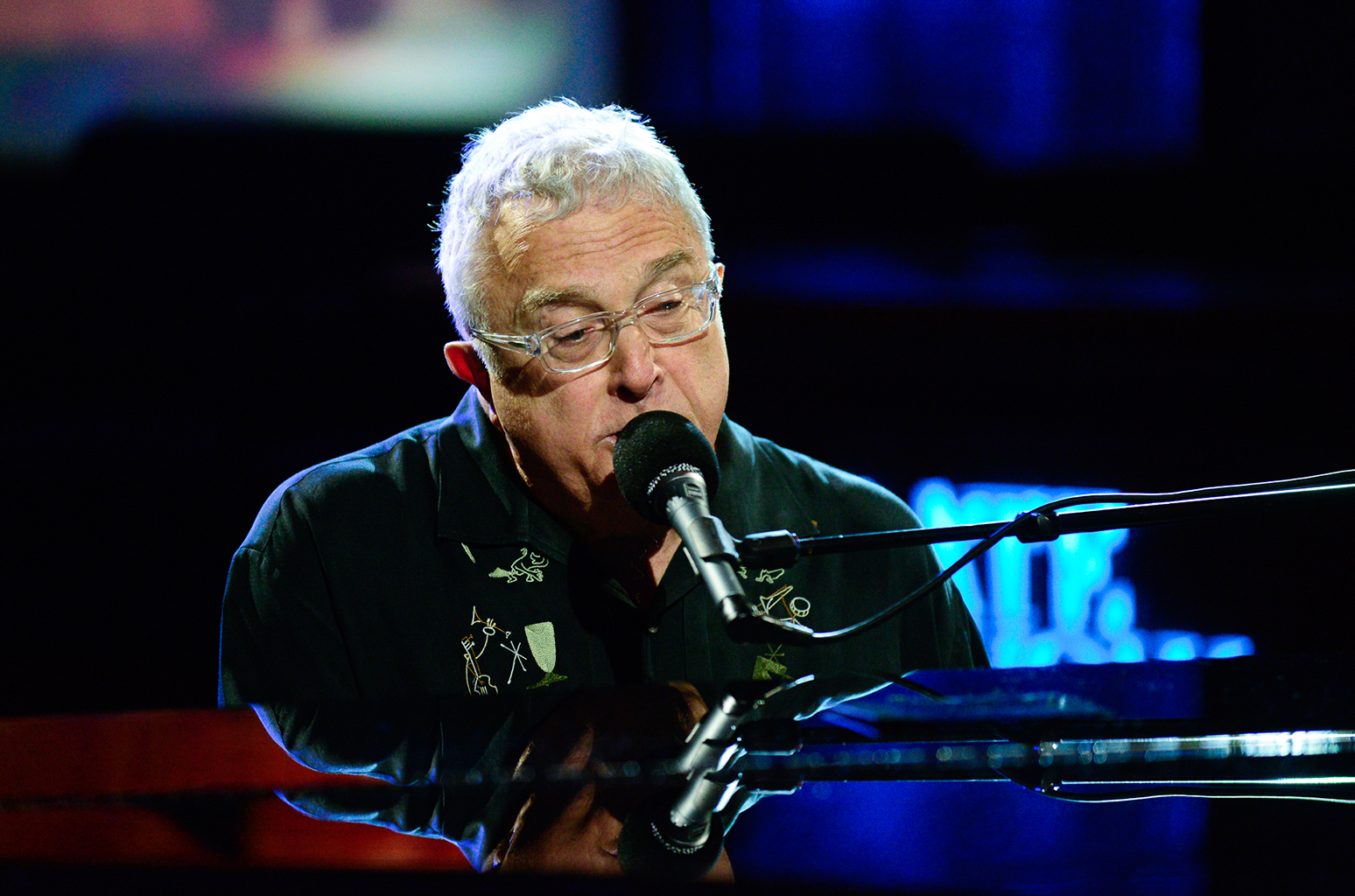 John Williams has a chance to extend his record with a 47th scoring nomination with Star Wars: The Rise of Skywalker.

Randy Newman has both a song and a score listed among the 15 semifinalists in those categories for the 92nd annual Academy Awards. Elton John has two songs in the running. But "Beautiful Ghosts," which Taylor Swift and Andrew Lloyd-Webber co-wrote for Cats, failed to make the list of 15 semifinalists for best original song. The song received a Golden Globe nomination last week.  It's the only Globe nominee for song or score that failed to make the Oscar shortlists.

Newman is shortlisted for best original score for Marriage Story; for best original song for "I Can't Let You Throw Yourself Away" from Toy Story 4. Newman has been nominated in the latter category with a song from each of the first three Toy Story films. His hopes of keeping his perfect record intact are still alive.

John is in the running for best original song with both "Never Too Late" from The Lion King (which he co-wrote with Tim Rice) and "(I'm Gonna) Love Me Again" from Rocketman (which he co-wrote with Bernie Taupin). If both songs are nominated, John will be the first songwriter with two songs from different films nominated in the same year since Lionel Richie 34 years ago. Richie won for "Say You Say Me" from White Nights and was also nominated for co-writing "Miss Celie's Blues (Sister)" from The Color Purple.

"Never Too Late" is competing for a nomination with another song from The Lion King—"Spirit," which Beyoncé Knowles-Carter co-wrote with Timothy McKenzie and Ilya Salmanzadeh. The Lion King is this year's only film with two shortlisted songs. If both of these songs are nominated, it will mark the first time that two songs from the same film that were written by different writers (or entirely different teams of writers) have been nominated since two songs from 2003's Cold Mountain made the final ballot. Sting wrote "You Will Be My Ain True Love"; T-Bone Burnett and Elvis Costello wrote "Scarlet Tide."

Other storylines that are still in play: Cynthia Erivo is shortlisted with a song she co-wrote for Harriet. If she wins, she's an EGOT. John Williams has a chance to extend his record with a 47th scoring nomination with Star Wars: The Rise of Skywalker. Newman and his cousin Thomas Newman could be competing in that same category—best original score.

Here are the 15 songs and 15 scores that are shortlisted for Academy Awards, together with some top contenders that failed to make the shortlists. They are listed in alphabetical order by film.

"Speechless" from Aladdin (Disney). Written by Alan Menken, Benj Pasek & Justin Paul. Menken is a four-time winner in this category; Pasek and Paul won for "City of Stars" from La La Land.

"Letter to My Godfather" from The Black Godfather (Netflix). Written by Pharrell Williams & Chad Hugo. Williams was nominated in this category six years ago for "Happy" from Despicable Me 2. The doc is a profile of legendary music executive Clarence Avant.

"I'm Standing with You" from Breakthrough (20th Century Fox). Written by Diane Warren. Warren is a 10-time nominee in this category. She has yet to win.

"Da Bronx" from The Bronx, USA (HBO). Written by Paul Williams & Charles Fox. Williams has had three noms in this category; Fox has had two. Williams won for co-writing "Evergreen" from A Star Is Born (1976). The doc is a socio-cultural history of the Bronx.

"Into the Unknown" from Frozen 2 (Disney). Written by Robert Lopez & Kristen Anderson-Lopez. This song was nominated for a Golden Globe. The Lopezes won their first Oscar with "Let It Go" from the first Frozen (which, like "Into the Unknown," was performed by Idina Menzel). They have since picked up a second award with "Remember Me" from Coco.

"Stand Up" from Harriet (Focus Features). Written by Joshuah Brian Campbell & Cynthia Erivo. This song was nominated for a Golden Globe. If Erivo wins an Oscar, either for best actress or best original song, she would become an EGOT. Erivo will be 33 on Oscar night, which would make her the youngest EGOT ever. That distinction is currently held by Robert Lopez, who was 39 when he achieved the feat.

"Never Too Late" from The Lion King (Disney). Written by Elton John & Tim Rice. The two Brits won in this category 25 years ago for "Can You Feel the Love Tonight" from the first The Lion King.

"Spirit" from The Lion King (Disney). Music and lyrics by Beyoncé Knowles-Carter, Timothy McKenzie & Ilya Salmanzadeh. This song was nominated for a Golden Globe. This would be the first Oscar nom for all three of these writers. Beyoncé is a 23-time Grammy winner, an eight-time Emmy nominee.

"Daily Battles" from Motherless Brooklyn (Warner Bros.). Written by Thom Yorke. This would be the first Oscar nom for Yorke, a founding member of Radiohead.

"A Glass of Soju" from Parasite (Neon). Written by Jung Jaeil & Choi Woo Shik. This nomination for this rock ballad was considered a surprise.

"(I'm Gonna) Love Me Again" from Rocketman (Paramount). Written by Elton John & Bernie Taupin. This song was nominated for a Golden Globe. This would be John's fourth nomination in this category; Taupin's first.

"High Above the Water" from Toni Morrison: The Pieces I Am (Magnolia Pictures). Written by Kathryn Bostic. This nomination was considered a mild surprise.

"I Can't Let You Throw Yourself Away" from Toy Story 4 (Disney/Pixar). Written by Randy Newman. Newman has been nominated 12 times in this category, winning twice.

"Glasgow (No Place Like Home)" from Wild Rose (Neon). Written by Caitlyn Smith, Mary Steenburgen & Kate York. The versatile Steenburgen won a 1980 Oscar for best supporting actress for her role in Melvin and Howard.

Avengers: Endgame, Alan Silvestri (Disney). Silvestri was nominated in this category for Forrest Gump (1994).  Avengers is not only this year's No. 1 box office hit in the U.S., but earned the biggest worldwide box office total in history.

Ford v Ferrari, Marco Beltrami (20th Century Fox). Beltrami was nominated in this category for 3:10 to Yuma (2007) and The Hurt Locker (2009). He collaborated on the latter film with Buck Sanders.

Frozen II, Christophe Beck (Disney). Beck was, surprisingly, passed over for an Oscar nom for his score for the first Frozen. It did, however, bring him a Grammy nom.

Jojo Rabbit, Michael Giacchino (Fox Searchlight). Giacchino has been nominated twice in this category, for Ratatouille (2007) and Up (2009). He won for the latter film.

Joker, Hildur Guðnadóttir (Warner Bros). This score was nominated for a Golden Globe. The Icelandic composer won an Emmy in September for her work on HBO's Chernobyl.

The King, Nicholas Britell (Netflix). Britell has been nominated in this category in two of the last three years for Moonlight (2016) and If Beale Street Could Talk (2018).

Little Women, Alexandre Desplat (Sony/Columbia).  This score was nominated for a Golden Globe. Desplat is a 10-time nominee in this category. He won for The Grand Budapest Hotel (2014) and The Shape of Water (2017).

Marriage Story, Randy Newman (Netflix). This score was nominated for a Golden Globe. Newman has yet to win in this category, despite eight scoring noms.

1917, Thomas Newman (Universal). This score was nominated for a Golden Globe. Newman has amassed 13 Oscar noms for his scores—but no wins (yet)—making him the living composer with the most scoring nods without a win.

Pain and Glory, Alberto Iglesias (Sony Pictures Releasing International). Iglesias is a three-time nominee in this category for The Constant Gardener (2005), The Kite Runner (2007) and Tinker Tailor Soldier Spy (2011).

Star Wars: The Rise of Skywalker, John Williams (Disney). Williams has received a record 46 noms in this category, including five for previous films in the Star Wars franchise.

The final round of voting runs from Jan. 30 to Feb. 4. The 92nd annual Academy Awards will be presented on Feb. 9 at the Dolby Theatre in Hollywood.