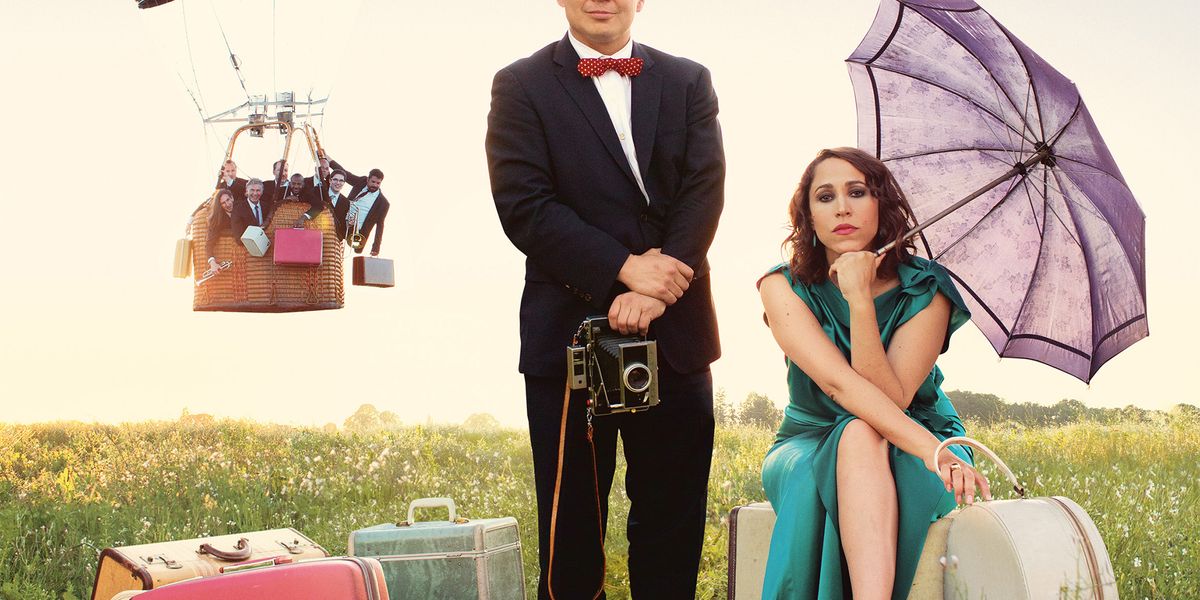 Although Pink Martini have always been a band that cast a nostalgic eye backward and the past has never beckoned with such enticing rosy-ness, lead singer China Forbes is making the best of this global moment, which she calls “the sabbatical I never thought I’d have”.

Speaking from her home in the federally designated “anarchic jurisdiction” that is Portland, Oregon, Forbes reports that while the city’s downtown seems “surreal”, she has mostly stayed locked down in her home at the edge of town since the band abruptly ended their regular touring in March. “On the heels of [the protests],” she said. “We have had fires and smoke and had to stay inside for almost a week. It’s been a punishing couple of months in that way.”

It will come as no surprise to long-time fans familiar with Pink Martini’s penchant for optimism that the outfit have put out two new sunny songs despite these surroundings. In stark contrast to the dumpster fire year of 2020, the band released “Let’s Be Friends”, with an accompanying video of members hugging and mugging for the camera, and “The Lemonade Song”, which, as the old saying goes, espouses taking the sour fruit and making it sweet.

Forbes says the songs were written and recorded before the pandemic began. “Let’s Be Friends” marked the first time in years that she and band founder Thomas Lauderdale tried to write songs together. They decided on a “menage a trois” and brought in a third songwriter friend, Jim Bianco, and worked together well enough to try another session a few weeks later for “The Lemonade Song”.

“Let’s Be Friends”, Forbes says, may have been an unconscious manifestation of her and Lauderdale’s unspoken desire to be a songwriting team again. As for “The Lemonade Song”, she says. “Turning lemons into lemonade, what is more timely than that?”

She said the band was not too worried about seeming out of step with the tumultuous times around them. “I try not to worry too much about that because it’s very paralyzing,” she said. “We need to move forward. If this speaks to some people, great; if other people don’t like it, there’s nothing we can do about it. When things are bad for so long, are we supposed to wallow in that and never put anything positive back into the culture?”

Keenly cognizant of the political moment, Forbes and her bandmates continue their support of progressive politics. She noted that one of the ongoing things she has been doing during the quarantine is recording songs for virtual fundraisers for groups she supports. The band’s original incarnation came when Lauderdale brought together musicians in 1994 for an event to raise funds to fight a statewide ballot measure to make homosexuality illegal.

The band’s first big break came in 1997 when the Forbes-Lauderdale song “Sympathique” was used for a Citroen commercial in France and then was adopted by a labor movement there. “It was amazing,” Forbes recalled, “because people didn’t know Pink Martini, but everyone in France knew that song.”

Since then, the band have collaborated with a wide variety of musical outfits, from the Von Trapp Family Singers, Carol Channing, and Rufus Wainwright to National Public Radio news anchor Ari Shapiro and local Portland civic activists. Sometimes called the “little orchestra from Portland”, Pink Martini staked out their unique place, performing in formal attire and ball gowns, superficially seeming retro or kitschy as if lifted from a night club in an old movie. But in a sense, they have not just recreated the past, but reimagined it: playing with reverence and sophistication, but also adding cosmopolitan, diverse cultural elements that weren’t included back in the day or were treated as jokey exoticism.

“Thomas’ aesthetic is what has informed everything,” said Forbes. “He’s someone who loves everything vintage; he loves the past. We’re not edgy and trying to be cool. I think that is that sweet naivete, and also just loving the past and the beauty of the past while still remembering that not everything was beautiful about the past.”

Pink Martin have also become known for recording songs in many languages, including French, Arabic, Greek, Thai, and Japanese. Forbes said it was less a strategy and more a result of being asked by fans to record in their native languages and being “inspired by the places we’ve been.”

The band have no plans for releasing a new album, she said, but their release of singles is a sign of the new phase where they create smaller projects and tours — when touring is an option again. The band got together — after being tested for the coronavirus — recently, Forbes said, for a recording session for what she described as a potential online variety show. The band is also scheduled to do a handful of concerts in California drive-ins and a few virtual concerts. She described the reunion of the band as welcome but strange. “Not being able to hug people is really weird when you see them for the first time after all this time. Luckily, I have my son, so I get to hug him a lot.”

While she is enjoying some aspects of the break from the band’s heavy touring schedule, Forbes said, “I do miss the touring in a way, because it’s really quite fun. I dread it mostly because of the packing, that’s the worst part, but once I’m on the road, I really love it.”

As she has used her de facto sabbatical to write new songs, learn the bass and cavaquinho, as well as delve into new recipes and revel in found time with her son, Forbes recalled a revelatory moment in her whirlwind life with Pink Martini.