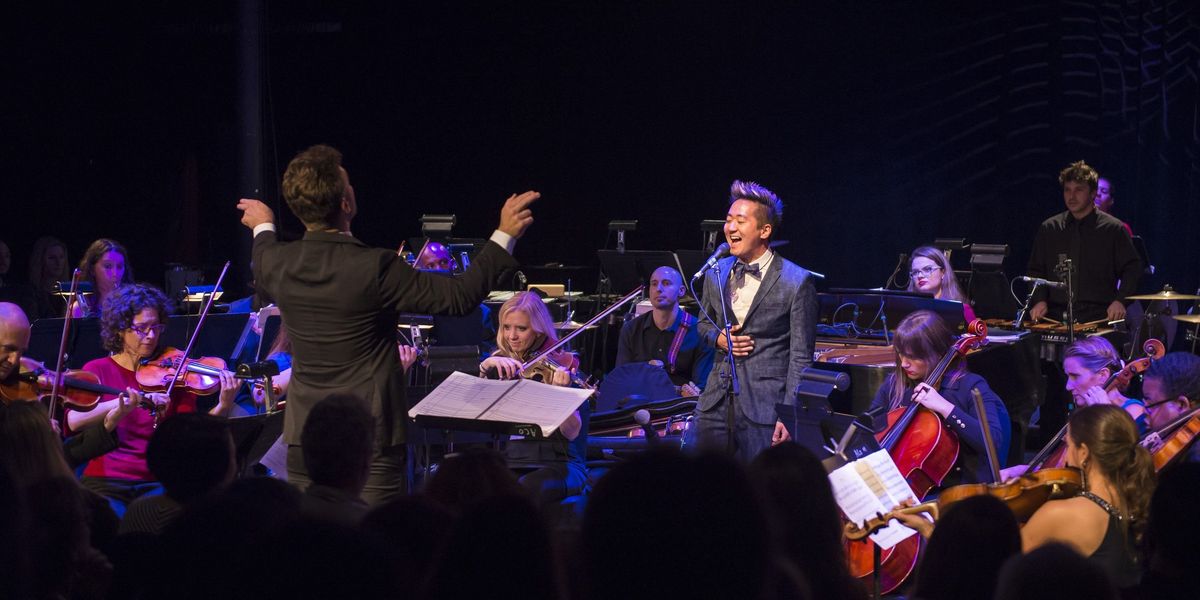 In 2012, Kishi Bashi felt like a revelation. 151a was a stunning solo debut for the artist—a lush expression of idiosyncratic baroque cinema. It was the dreamlike arrangement of “I Am the Antichrist to You” that soared as the album’s magnum opus. Still one of the most well-loved of Bashi’s catalog today, the song is given a new, orchestral spin in collaboration with the Nu Deco Ensemble. Featuring on the latter’s self-titled 2019 debut, a live performance of the song captured at Miami Beach’s New World Center showcases the electricity in the artists’ brilliant natural chemistry.

Nu Deco Ensemble has become a vibrant staple of the Miami scene, and well beyond, since their 2015 inception. With an aim to renovate the chamber orchestra with invigorating arrangements and performances, the ensemble has ascended into a tour de force. Both inherent innovators, Kishi Bashi overseeing the production of Nu Deco’s aforementioned self-titled debut was an obvious fit. As it bubbles over into this gorgeous live performance, it’s clear how close that the two acts have become as musical colleagues and friends over the course of their collaboration.

In light of the PopMatters premiere of their live performance video, the Nu Deco Ensemble’s Sam Hyken and Jacomo Barrios chatted with us about “I Am the Antichrist to You” and their debut album.

You have worked with one another at-length in the studio throughout the production of your self-titled album, and here you are with a powerful performance working with one another on-stage. How does the energy of your collaboration differ when translated into a live performance, as opposed to during the development of your album?

Live performances and studio recordings are such different worlds for us. There is incredible magic that happens when we collaborate live with Kishi Bashi on stage that we have felt since our first concerts together in 2016. He certainly brings out the best in us as artists, and his music has always had an orchestral, cinematic feel that suits our ensemble very well. Simply put, it just feels right, very seamless. Also, as performers, the energy we feed off from the audience catapults us to new heights and brings the musicians in together more. This allows Kishi to truly soar above while we support, elevate, and re-imagine his incredible music and artistry. He also has intuitive instincts with classical musicians (being a violinist himself) and knows how to pull out something unique and creative from our ensemble.

I feel like he was one of the first major collaborators who understood all these aspects authentically and “got” us. We didn’t have to explain it to him at all. I distinctly remember Sam and I looking at each other in 2016 during our first show together and going, “This is us! This is truly who we are!”

Studio recording work is a whole other level and experience that is heavily production, audio, and content-driven. How can we capture the highest quality of these collaborations, and what are the things we need to do behind the scenes to make that happen? It was during the week of this collaboration you see of “I am the Antichrist to You” that Kishi got wind that we wanted to record a studio album. At this point, it was our second collaboration together, and we felt so comfortable as colleagues and friends. Once he knew what our plans were, he became very concerned for us to do it the “right way” and not to fall into the traps and mistakes that normally an ensemble or new artist potentially could make in their first studio foray.

After a rehearsal at the New World Center one night, we all went out for a drink to hang and reflect. He said, “Guys, this album is going to be incredibly important for you, and I want to make sure you do it right. I know you, your sound, and what will sound the best from a studio album perspective. To that end, I would love to be your lead producer on the album.” After we picked our jaws up from the floor, we, of course, said we’d be honored by that, and he then guided us through the rest of the way; the process of recording in the studio, doing all the things in a way to get the best possible product. It’s different than preparations and rehearsals for live performances.

What about Kishi Bashi’s “I Am the Antichrist to You” in particular drew you to develop a Nu Deco arrangement of the song?

The growth of the song, as well as the massive sonic range as it develops, made this an extremely rich song to collaborate and create a unique orchestral driven arrangement for. Starting with simple string pizzicatos, then opening to this incredible expansive and dynamic cinematic feel, while Kishi’s vocals fly high above, make it very powerful and have so much depth and power. We consider the orchestra as the ultimate vehicle for musical expression with no sonic boundaries- this arrangement was particularly able to become something truly fresh and unique.

You have worked with the likes of Kishi Bashi, Danay Suárez, and many others who are very well-regarded in their lanes and have found international recognition for your compositions and re-arrangements. All of this, and in such a short span! Looking to the future, where are you hoping to take the Nu Deco Ensemble next?

We have always wanted to represent “Magic City” Miami and its cultural pillars on the world stage through albums, videos, tours, and local performances. However, with COVID-19 interrupting the live performances and not knowing what the next 12 months would look like, we’ve pivoted to releasing archived content, which has spurred some real growth, and now we are finding new fans across the globe in ways we didn’t expect!

I think the goal is to keep this trajectory moving, while continuing to support living composers, creating unique and transformative collaborations, and bring the highest levels of artistic and creative qualities to all we do. When the time comes to be on the road, we will have established who we are to a wide musical community and create a place to share moving music experiences that are meaningful.