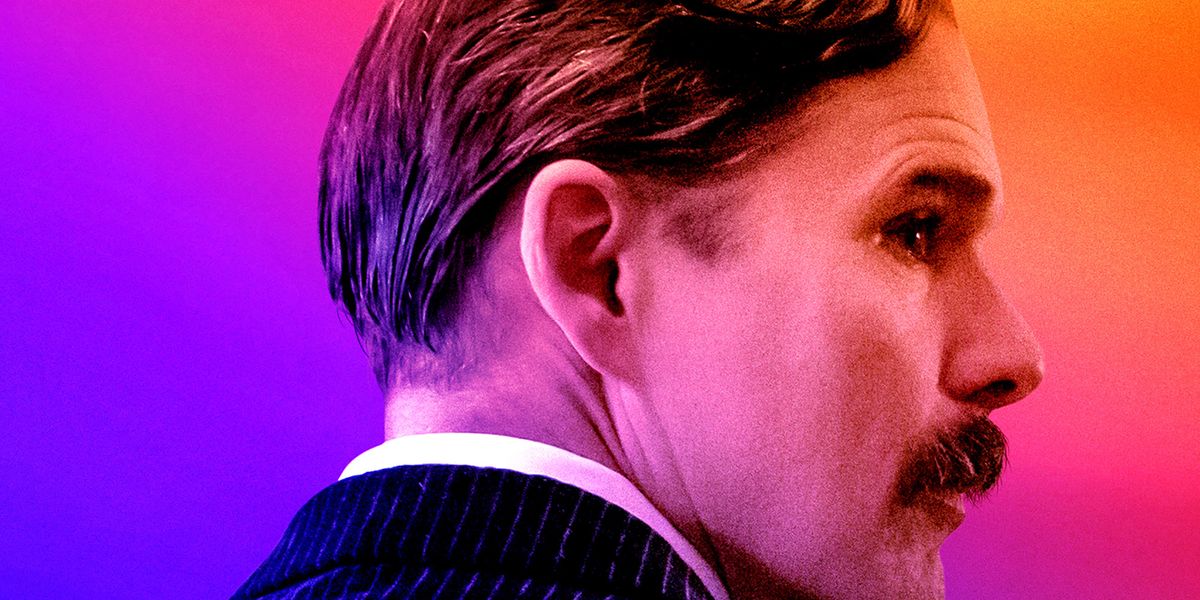 In Michael Almereyda’s Tesla (2020), Ethan Hawke plays the titular Serbian-American inventor. The film charts Nikolai Tesla’s part in what has become commonly known as the The War of Currents. This “war” took place in the 1880s and 1890s, between Telsa and his patron, George Westinghouse’s (Jim Gaffigan) alternating current (AC), and fellow inventor Thomas Edison’s (Kyle MacLachlan) direct current (DC). When AC successfully powers the Chicago World’s Fair in 1893, Tesla then begins his work into wireless energy. This takes him to Colorado Springs and then Wardenclyffe, New York. Anne Tracy Morgan (Eve Hewson), the daughter of banker and financier J.P. Morgan (Donnie Keshawarz) presents the story, whose casual and affectionate interest for Tesla is unrequited.

This is not the first time that Hawke and MacLachlan have played opposite one another as protagonist and antagonist. They previously collaborated with Almereyda on Hamlet (2000), in which Hawke played the titular hero opposite MacLachlan’s Claudius. Transposing the Danish setting of Shakespeare’s play for contemporary New York, the director shows his playful nature with merging the past with the present, which he continues by reversing it in Tesla.

Anne is at a laptop and shows viewers the search results for the two men and Westinghouse as she introducing us to the three men. We see Edison at the World’s Fair swipe a touch screen phone, and later Hawke sings in a karaoke style segment the 1985 Tears for Fears song, “Everybody Wants to Rule the World”. This brazen and unapologetic playfulness will divide the audience. It will irritate some people and delight others. In a film about Nikolai Tesla, who lived as much in his imagined future as in his actual present, it’s an appropriate creative choice.

In an early scene of narration, Anne says, “Pity the poor immigrant as the song goes. Tesla came to America with an open heart, filled with expectation and hope.” These words challenge the current anti-immigration feeling heightened by Donald Trump in the US and Brexit in the UK. Anne’s words remind us that an immigrant shaped our past and present world. Almereyda’s film is not politically driven, but it does speak about empowering and valuing the individual, to not allow prejudicial repression to be our collective limitation.

Anne’s narration is effective in creating a more engaging experience. She addresses viewers directly, holding our eye and commanding our attention. It also serves to strengthen her place in the story because her relationship with Tesla influences how we perceive him, directly and indirectly. In one scene during a conversation Anne’s friend reveals the man beneath the genius. She says to him, “Anne is very upset. She says you live in your head.” Tesla replies, “Doesn’t everyone?” She explains, “Too much in your head. I think she feels left out.” Tesla then says, “Sometimes it seems that all I do is think for days and weeks on end. Like my brain’s burning. Who could live with that?” If the film is an engine, then the pair are inseparable parts — Anne is the motor and Tesla is the electricity.

The accuracy of the story itself is questioned in the film. Anne points out the unlikelihood that one disagreement between Edison and Tesla went the way it’s shown, or that the meeting we see between the two men at the World’s Fair even happened. The closest Tesla may get to an apology from Edison — who Anne tells us never admitted his error in dismissing the future of alternating current — is a posthumous one here. These conveyed moments are as dramatic as an actual apology, but they are more likely Almereyda’s acknowledgment that his film is a search for Tesla’s story that can be found within limitations of historical documentation. Further, Almereyda infers Tesla’s eccentric and compulsive habitual nature through certain mannerisms, but he chooses to not show his subject’s darker side, to the point that Almereyda can know of it.

In Tesla: Man Out of Time, Margaret Cheney writes, “Tesla displayed occasional streaks of cruelty that seemed motivated by likes and dislikes of an almost compulsive sort. Fat people disgusted him, and he made little effort to conceal his feelings.” The director is not only being playful, but he’s making a point.

We’re reminded of the need to read around a film to develop a fuller picture and to pierce any mythologizing of past persons. Also, Anne’s narration cautions that men such as Edison are well-regarded or popularised by history, while Tesla and Westinghouse are treated less favourably. She also questions whether the skill of self-promotion plays a part. A case in point is director Alfonso Gomez-Rejon’s The Current War (2017), which dismisses Tesla as a minor footnote in The War of Currents, choosing to write a version in which Edison and Westinghouse are the major players.

The appeal of the film lies in its assumption about the historical figures and in the performances of the cast. Almereyda enchants us, striking an emotional chord instead of seeking an exclusively intense dissection of the struggle, the successes, and failures of men daring to imagine and risk the leap forward. We should view the film as an emotional experience, and appreciate that while it captures the details of Tesla’s story, it also values the humanity, or rather the spiritual energy of the characters.

What the director and Hawke convey when faced with their limitations of merely a glimpse of Tesla in an 103-minute running time, is the spirit of the man. Cheney writes, “Miss Dorothy F. Skerritt, his secretary of many years, attested that even in old age his presence and manner were impressive. “From under protruding eyebrows,” she wrote, “his deep-set, steel grey, soft, yet piercing eyes, seemed to read your innermost thoughts…his face glowed with almost ethereal radiance. …His genial smile and nobility of bearing always denoted the gentlemanly characteristics that were so ingrained in his soul.””

Whether this is what Hawke captures is uncertain, but he has the piercing eyes, and his face does seem to have a delicate radiance, with a gentlemanly presence that appears deeply ingrained in his performance, it’s inflected in every movement and expression. Whether he’s reading the innermost thoughts of another person, his gaze suggests a deep-rooted feeling or thought process beyond the words of the interaction, or the sights and sounds of the setting.

The music in Tesla is powerful, without which the film as an emotional experience would fall flat. In cinema the images are the body without a soul – the music provokes us to feel something for the story and its characters. From the opening of Tesla, the music does more than accompany the images. It merges with the words that express ideas, and illuminates the aura of the characters.

In one scene Tesla interacts with what is suggested to be a figment of his imagination. The man says to him, “We are what our thoughts have made us.” Likewise, the film and the characters are what the ideas and themes have made them. Almereyda’sTelsa is an emotional collage made up of words, images and music, with ideas that touch upon the existential, mortality, love and sacrifice. Yet, in as much as we may see the film as being about Tesla, it’s as much Anne’s story at its conclusion – a woman who empowered herself and refused to live in the shadow of the influential men of her time.