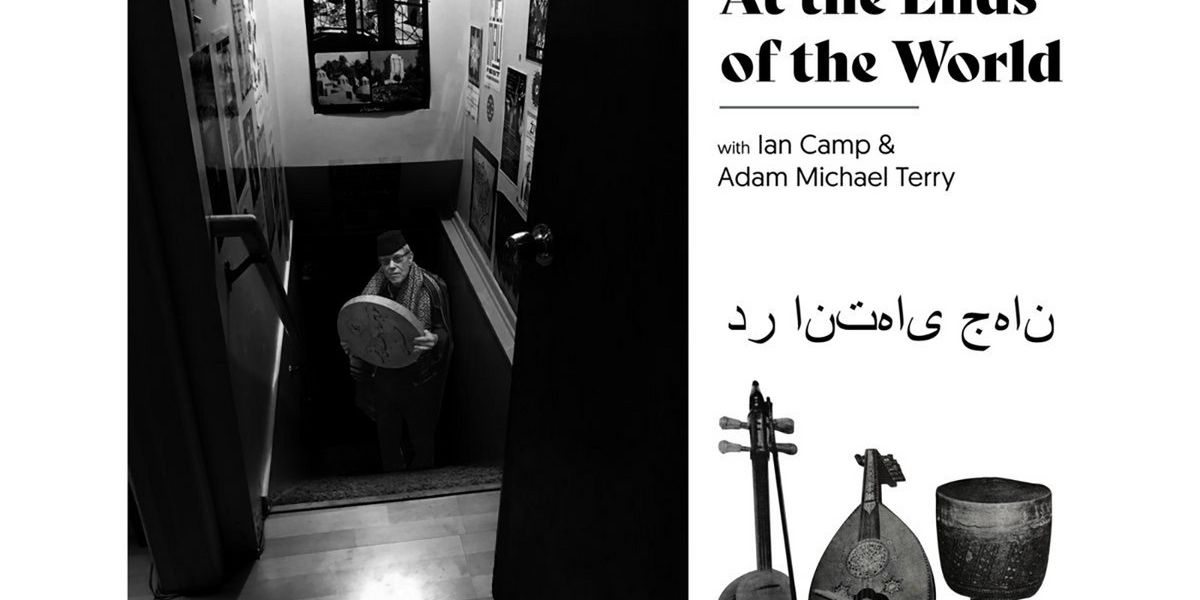 To call Lloyd Miller a tireless, relentless musicologist is quite an understatement. Although often labeled a jazz musician, Miller’s artistic pursuits stretch way beyond the jazz genre and usually have much more in common with world music subgenres. Well-known for his research work on Persian and Afghan music, he can play dozens of different instruments in various styles. His groundbreaking albums from the 1960s were among the first to combine the Middle East and Asia’s music with American jazz.

Currently residing in Salt Lake City, Miller may no longer be traveling the world, but he’s still deeply interested in the pursuit of multiple musical styles and traditions. His latest album, At the Ends of the World, is a collaboration with producer Adam Michael Terry and multi-instrumentalist Ian Camp. Recorded in the summer of 2019 primarily in Miller’s basement, this meeting of the minds was inspired by Terry and Miller’s growing friendship as well as the inclusion of their mutual friend Camp, who’d played live gigs with Miller for decades.

The album’s title is inspired by one of Miller’s favorite conversation topics, the looming apocalypse. In the album’s extensive liner notes, Terry writes how “Lloyd would suggest how we could lighten the darkness of the world through his beautiful music. We discussed releasing some music, either from archive or making new recordings, that would lend itself to this agenda.” Holed up in Miller’s basement, the trio – with Terry producing and adding percussion while Miller and Camp play a variety of instruments – created music that is simultaneously exotic, ethereal, and oddly calming.

“A New Clear Vision” opens the album as a sort of prologue. While the musicians are warming up their instruments, Miller is nonchalantly speaking about nuclear missiles and the devastating effects their detonations have on humans. Jolted back to the present, Miller then asks, “OK, so what are we gonna do?”, referring to the recording session. Camp then offers a suggestion: “Should we meditate for a minute, try to summon our genius, summon some inspiration?” That leads to the first “song” proper, “The Summoning (Ode to Oud)”, which includes Miller on the titular instrument as Camp adds upright bass and Terry contributes understated washes of cymbals. The effect is mesmerizing, mysterious, occasionally clattering, and gives the listener the ability to be utterly transported to another corner of the globe.

Moving on to the more traditional piano on “Dystopian Wind Dance”, Miller adds touches of Western music to the more Middle Eastern-style droning, and it seems initially out of place, but it’s not long before the trio locks into a warm yet disarming vibe. While playing the piano, according to Terry’s liner notes, Miller keeps the oud on his lap and goes back and forth between the two instruments during the song. Miller also adds bits of trumpet to “Earthquake of the Fallen Trumpet”, an edgy, highly percussive track inspired by an actual earthquake that occurred in the Salt Lake City area the morning of the song’s recording.

For a recording consisting of merely three musicians, it’s impossible to overstate the sheer eclectic nature of the album, not only in terms of style but also the instrumental firepower. “Bassmeant Blues at the Apocalypse” contains some bright, sharp flute work from Miller before he moves on to a solo on bowed dilruba (a sitar-like stringed instrument) followed by a koto solo from Camp. The song’s gently swinging nature sounds like an exotic take on Kind of Blue. The trio then perform a complete 180 on the following song, “Yūrei no Uta (Song of the Ghosts)”, an improvisational piece that takes traditional Japanese music as its primary point of reference.

At the Ends of the World concludes with “Pleasantly Persian”, a brief snippet of a live performance, the only track not recorded in Miller’s basement. It brings the album full circle, returning to the genre that’s expressed at the beginning of the album. By the end, the listener is treated to something of a 45-minute jaunt around the world, exposed to a variety of styles executed by three deeply talented and profoundly inspired artists. At the Ends of the World may not provide all the answers to a better life, but it can be a healing balm to make you forget global horrors for a little while.