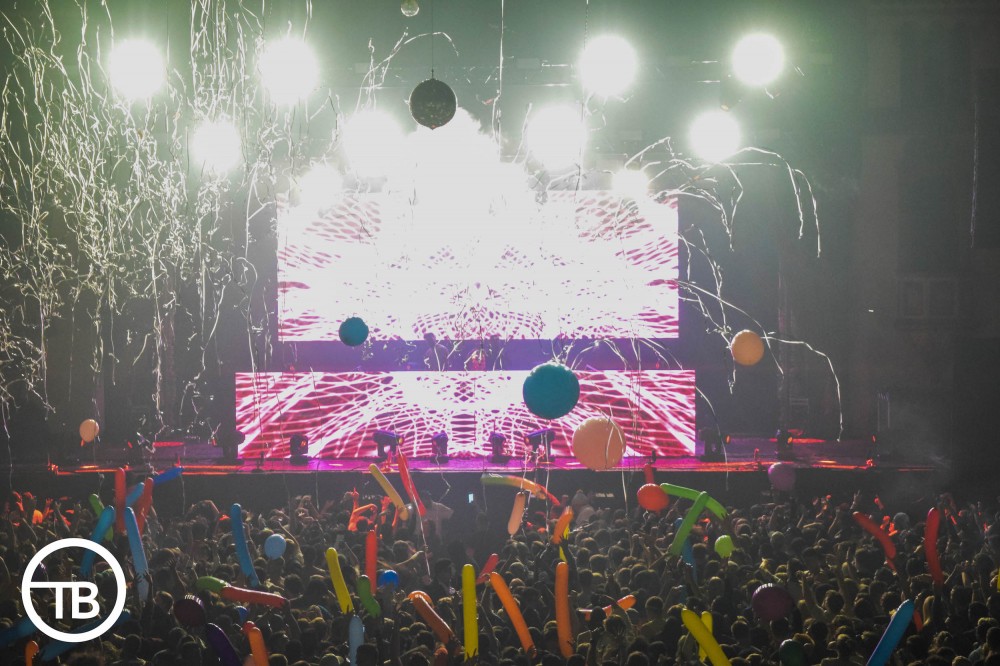 Photo Credit: Niki Graham React Presents brought four fantastic EDM acts to kick f 2018 at the Official Aragon Ballroom: Adventure Club, Bear Grillz, Ookay, and Gammer. While it wasn’t as highly anticipated as previous Reaction NYE nights, over a thousand fans made the trek to Uptown. The 0-degree weather didn’t stop Chicago’s best from donning their sequins, glitter, and winter accessories to come ring in 2018 with dubstep and heavy bass!

Chicago EDM fans were worried when British producer Gammer () tweeted about his delayed flight shortly after noon on Sunday. Scheduled to take stage at 8pm, opening act Gammer arrived much later, only able to play a 15-minute set. Fans appreciated the opening act, especially the mix Kayzo and Wuki’s song ” to warm Aragon up and get the ball rolling!

Starting just after 10pm, Ookay performed a live set. Armed with his , Ookay produced his own drums, chords, melodies, and vocals (wirelessly!) while performing some his own hit songs. Most memorable moment? The emotional ‘sexy sax’ drop from ” we all know so well was definitely a special one for the entire ballroom: Ookay performed it laying on stage, also relishing in the song’s vibes.

Who delighted our ears next? A plush bear helmet peeked out from behind the tables indicating the third act, Bear Grillz, was about to blow our minds! He definitely brought a high-energy set with headbangers reminiscent the Snails set the night previous. He kept his set fresh by mixing in classics like Blink 182’s ‘What’s My Age Again?’ and teasing DJ Alice’s ‘Do You Think You’re Better Off Alone’.  The visuals neon insects, along with bees, honeycomb, and, course, bears, were also highly interesting and fun to watch. caption id=”attachment_40408″ align=”aligncenter” width=”700″]

Twenty minutes before midnight, our evening’s headliners were silhouetted with st, red lights and a large, red-blue AC logo above. Christian and Leighton Adventure Club smiled, snapping pictures before the crowd as their set began. They were soon standing on the DJ table hyping the crowd as midnight approached. With 30 seconds left, the boys led a countdown: the screen played the numbers, the crowd chanted, and after the final “3, 2, 1…” a moment awe. Rows and rows colorful balloons fell upon the crowd, along with white confetti and silver streamers. Guests cheered, kissed, and smiled below a blanket balloons with air horns blaring and a robotic “Have a Happy New Year” wished us well. And the first song 2018? Adventure Club’s incredibly beautiful and bassy remix, . caption id=”attachment_40409″ align=”aligncenter” width=”700″]

Photo Credit: Niki Graham/caption] Following the climax the evening, Adventure Club continued mixing top melodic dubstep and bass songs, including their song ” (on OTB’s radar !), ” and ”, and teased hits by and . As the night neared 1:30 AM, Adventure Club lightened the vibe with classics and throwbacks such as Twenty One Pilots’ ‘My Ride’, Fall Out Boy’s ‘Sugar, We’re Going Down,’ and My Chemical Romance’s ‘Welcome to the The Black Parade’. Admittedly, I left a little early to make it to the Official Reaction NYE After Party at The Mid. ”, a song by former Chicago-resident, Kanye West, played as I made my grandiose decent down Aragon’s 1920’s ballroom stairway. It was a special send f, listening to Rhianna’s vocals about the Chicago’s city lights, as guests began stepping out into the frozen, moonlit street and stepping into 2018.