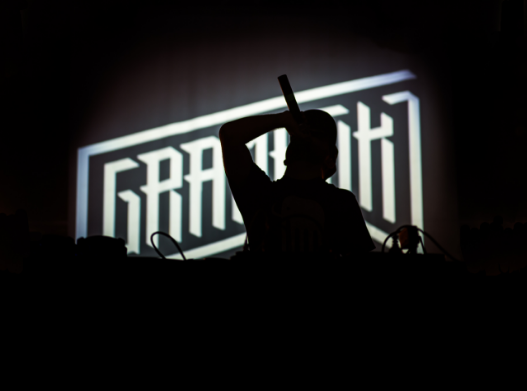 Photo Courtesy React Presents Gramatik, is bringing his to Chicago tonight! The Windy City will be one the first to hear songs f the  live as this is only the second stop on the tour. Gramatik is highly recognizable during live sets: known for sporting classic black shades, a black hat with his iconic “G” logo, and a black top, you’ll know him when you see him! Not only does Gramatik produce on his own label, , but he has mastered the art producing a range genres, from to electro hip-hop, to swingin’ dubstep, and even cfeehouse jams. Re:Coil is a perfect sample his diverse sound and production expertise. The EP features grimy beats in ‘Future Crypto’, Eastern samples and trappy beats in ‘Aymo’, and if you’re craving some  the poppin’ dubstep that our Lowtemp Master drops at fests, you’ll love ‘Voyager Twins’. Listen to ‘Re:Coil Part 1’:

But, music isn’t the only thing that makes Gramatik our favorite Solvenian producer. His love and passion for science and education is really what makes him so lowtemp.

How many producers do you know that are super interested in promoting science and education? So much so that most their songs, albums and art reflect pivotal moments in science, technology, and history.  Gramatik is one the most fascinating artists to follow. He frequently retweets posts from Elon Musk and Astronomy Magazine, advocates for digital freedom and shares trending articles about digital currencies. Physics, chemistry and space are also woven into his musical creations in some the most inventive, creative ways. For instance, , a hit from Gramatik’s album ”, was named after the hotel room Nikola Tesla worked (and eventually died) in. A personal favorite from the album, , was named after the founder (or group founders) Bitcoin. Epigram was pretty legendary as the tracks were not only great but the connection to technology and science really represented Gramatik’s values and passions. With other top-notch songs like and , Lowtemp Music fans were treated well back in 2016. Science lurks in the newest EP, as well! ‘Voyager Twins’ pays homage to the pair spacecraft that were sent to explore the outer Solar System over 40 years ago. ‘Aymo’ acknowledges famous, Italian race car driver, Aymo Maggi. Maggi was known for racing some the earliest Bugatti models. ‘Recovery’ is actually about Gramatik himself. For those who attended Freaky Deaky 2016, you might remember he performed in a wheelchair having recently broken his own leg, but had healed and was back on his feet by December.

Gramatik is also at the forefront the cryptosphere. Not just an enthusiast or investor, Gramatik is the first artist to tokenize himself, allowing fans to directly support the artist, decentralizing his revenue from outside record labels, recording companies, production teams, contracted regulations, etc. Hosting an Ether party back in November 2017, Gramatik raised over $2.48 million in Ether in under 24 hours. These funds were redistributed to GRMTK tokens which is now worth more than $9 million, and tradable on . “Embedded in the GRMTK token is not only the rights and royalties my creations, but the ideals and philosophy freedom and liberty for all artists, for all people,” he said in a press release last year. “This is a movement not only art, but the mind and the spirit.” To learn more about Gramatik’s tokenization and decentralization, check out this  or read their .