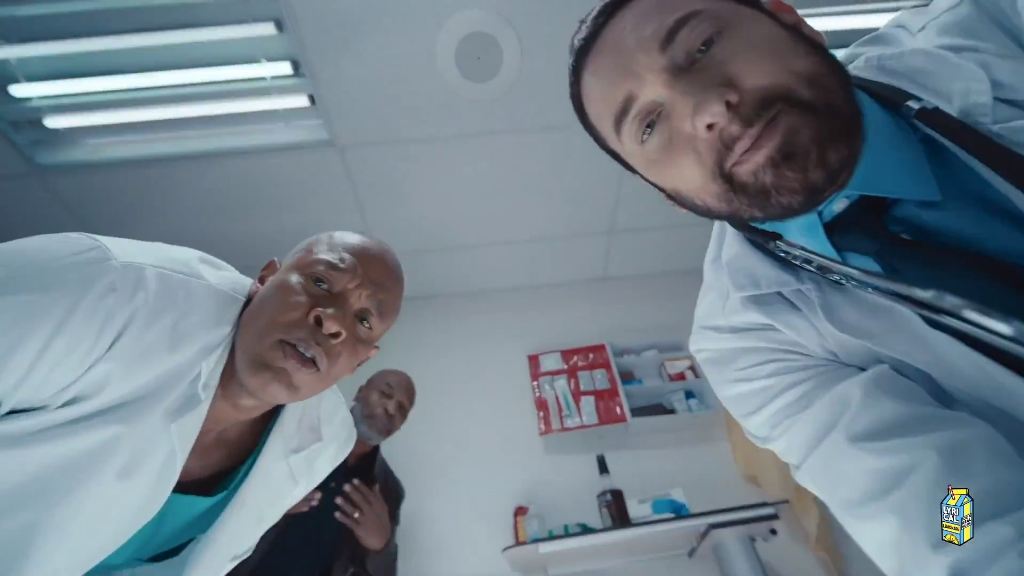 Eminem thinks he’s invincible in his monstrous video for “Godzilla” that he released Monday (March 9), but he’s quickly proven wrong.

The music video, directed by Lyrical Lemonade’s Cole Bennett, starts off in a Costco-resembling supermarket where the Music to Be Murdered By artist brings his first lyric — “I can swallow a bottle of alcohol and I’ll feel like Godzilla” — to life. The drunk rapper mozzies around the store with odd characters, some of whom he plays himself, before he blows Lego chunks.

Even though he triumphantly lands back on his feet atop a mountain of his entire discography, spitting fire “Like a liar’s pants” in front of an audience full of shoppers, Eminem is forced to run away from them before Mike Tyson accidentally knocks him out.

His longtime collaborator Dr. Dre plays up his title by wearing a white coat and blue scrubs alongside Eminem, who simultaneously plays the fellow doctor and the “I Need a Doctor” rapper’s patient. Both of Shady’s characters switch off rapping his fiery and fierce last verse before Bennett signs off the clip with a special tribute to Juice WRLD, the song’s featured artist who died at just 21 years old on Dec. 8 from an accidental overdose.

Juice WRLD’s chorus from the song still plays throughout the music video, but his solo vocals share an important message in the video’s final 30 seconds. “I hope everybody havin’ a good day. I hope everybody accomplished something significant. Even if you didn’t accomplish anything significant, don’t be discouraged,” he voices over a black-and-white video of him smiling. “Just aim to accomplish something significant tomorrow and the next day and so on. If anybody is going through anything, I hope and I pray that you get through it. And just know that you do have the strength to get through whatever the f— you going through, no matter what it is.”

Watch the “Godzilla” video below.