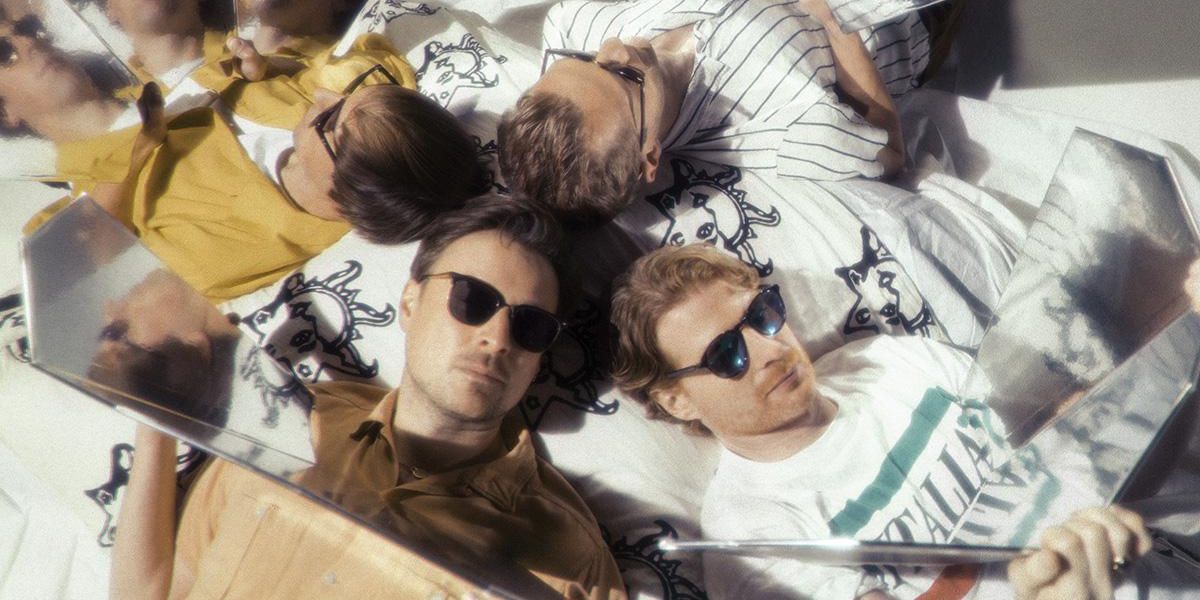 Django Django have built on the momentum of their previous records with the brilliant Glowing in the Dark, a fantastic whirl of the band’s sonic influences. The different sounds incorporated into the album – psychedelic pop, surf rock, indie, synthpop, dance, even funk – gives listeners a dizzying tour into their favoured musical inspirations. Glowing in the Dark sports a thick, dense sound that feels like a celebration of studio trickery and musical prowess. The LP is the band’s fourth studio release after the well-received Marble Skies (2018) and continues with Django Django’s further exploration of the intersection of indie rock, New Wave, and dance club culture. The sound of Glowing in the Dark works as a joyful, articulate valentine to the London music scene.

Much of Glowing in the Dark is a mixtape of 1980s to 2020s pop music, all of which has been streamed through a buzzy, crackling pop filter. The hooks are indelible, and the sound is plump, shiny, and thick with gloss. It also features some virtuoso percussion and dazzling guitar work, along with soft, sweet vocals. Though much of Glowing in the Dark is felt in Marble Skies, the album is still a twirling mass of exciting surprises.

The record opens with “Spirals”, which starts with video game bleeps that quickly speed up to join some fantastic drumming, and gorgeous crooning. The rumbling bass gives the song – swirling pop tune – with a faintly New York City 1980s post-disco, dance-rock sound. The hook is irresistible and seemingly crafted for indie radio. Verses are punctuated with cymbals crashing, and guitars crowd into the thick, packed soundscape that seems to crescendo into a mad jam.

The delirious swirl of “Spirals” makes way to the 1960s pastiche of “Right the Wrongs”, a tight-fisted, bouncing rock song that finds its sound in the British Invasion, surf rock, and 1970s punk. It begins with churchy synths that are disrupted with gunshots of drums and guitars before the song kicks off on a pogoing jaunt. It’s an assertive blast that rushes through its two-minute running time.

Django Django’s seemingly boundless taste in music finds Brazilian bossa nova notes in “Got Me Worried”. It’s a brisk, shuffling, uptempo tune that glides effortlessly on a smooth melody before we’re transported into an indie-pop Carnival with some lively drumming as well as the gibbon-like whooping of a cuica. The song ends in applause, and it feels right because it’s an incredible feat to incorporate world music into their sound and do it so well.

After the flamboyance of “Got Me Worried”, we arrive at the A-List guest star, Charlotte Gainsbourg, who offers her wispy vocals to the catchy “Waking Up”. There is an insouciance to Gainsbourg’s voice, and it harmonizes and blends perfectly with singer Vincent Neff’s aloof warble. There is a vast, expansive sound to “Got Me Worried” that flirts with 1970s AOR. Though Gainsbourg is a big star, she doesn’t overwhelm the song, nor does she sound out-of-place; instead, she seamlessly fits into the song’s rangy quality.

“Free from Gravity” is another nod to the band’s affection for synthpop and 1980s-influenced dance-pop. There are elements of the shiny proto-funk of Jimmy Jam & Terry Lewis’ work with the Human League, as well as the gorgeous sheen of the New Romantic movement. The song shifts some oscillates between a spare arrangement of Neff’s multi-layered vocals singing over a rubbery synth to a wall of glassy, cool synths that sound like a 1980s MTV update of the Wall of Sound.

The impenetrable luster of “Free From Gravity” makes way for a New York Downtown rock of “Headrush”. The track recalls the kind of music that would have been heard at Max’s Kansas City or CBGB if those clubs were still around. It’s a smart marriage of rock-driven power-pop, punk, and art-rock.

If “Free from Gravity” and “Headrush” are allusions to the 1980s, then the instrumental “The Ark” is a brief (very brief, the song is about three minutes) look at the 1990s, particularly electronica and industrial music of the 1990s. It’s a moody, darker song that chugs along on a thumbing beat. Its production is heavy and dense with sampled noises, crashes, and squealing synths, sprinkling in bits of jungle, acid house, and alternative dance. Though it’s uncharacteristically darker than the rest of Glowing in the Dark, it’s a highpoint on the record – the different sounds and pieces of noise and music that drift in and out make for a fascinating listen, as you try to identify and spot what is exactly pulsing out of the speakers. Its strutting beat also gives the song an elegant archness.

From the genius of “The Ark” we move to “Night of the Buffalo”, another song reminding listeners of the 1960s. The vocals sound like the Mamas & Papas. There is some imaginative guitar work on the track, which has some vaguely Middle Eastern influences and impossibly and improbably recalling Ennio Morricone’s work on Spaghetti Westerns (yes, really). None of this should work, but it does – and as if to even confound us more, the song suddenly breaks into a classical string piece. It’s a gutsy move that pays off because listeners are just gobsmacked at the breadth of the band’s sound.

The next song is an explicit Valentine to Lennon/McCartney. The lilting, good-natured ballad, “The World Will Turn” is a sturdy, well-crafted pop song with (relatively) lean production and heavenly vocals, and airtight harmonies. The acoustic guitar is lovely in its simplicity and there is a lonely, melancholic violin floating behind the beautiful voices (courtesy of multi-instrumentalist Raven Bush). The song is just as shocking as “The Ark” in its craft – it’s a perfectly constructed pop song.