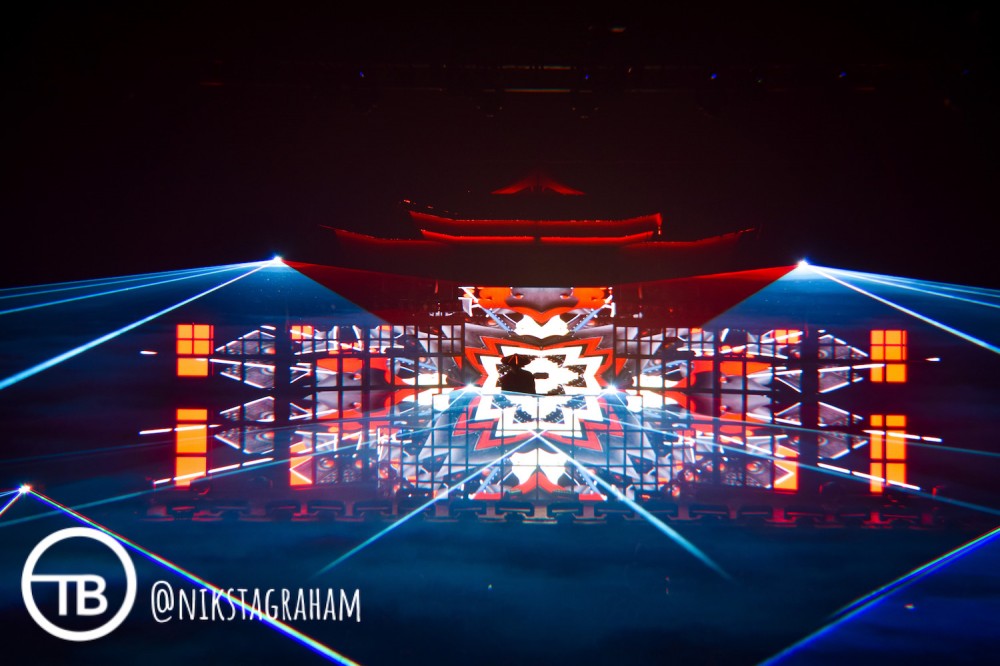 Photo Credit: Nicole Graham Once upon a time, there lived a Canadian ninja master who sought to create something unique. He dreamed teaching the next generation how to embody the ninja spirit and rip their sanity to shreads with ‘sik’ sounds. The ninja master rallied a squad elite ninjas to join him on his quest for world greatness. Just last Friday, the Ninja Squad assembled again in the Windy City to begin their third tour with Datsik. He was joined by Wooli, Riot Ten, Space Jesus and Brillz for a sold-out show at Chicago’s Aragon Ballroom.

Photo Credit: Nicole Graham The lines were out the door. The crowd in the entry foyer was packed more tightly than the salsa containers from Jewel Osco. It took over 45 minutes for some to get through security. But once through, a new reality hit: girls in Datsik crops and tanks wearing glitter leg wraps were everywhere. Guys were sporting Firepower Records tees and Grassroots flatbrims. Fans were dancing below the galaxy-inspired ceiling mural, complete with a single disco ball. It was the perfect backdrop for fans in their galaxy-patterned apparel, furry animal-inspired spirit hoods and glitter makeup. Chicago couldn’t have looked more beautiful.

Brillz’ hip-hop, trap, and bass channeled our heartbeats and got us psyched for some next level Shaolin bass! There was a flurry crew setting up the Shogun Stage complete with LED panels and authentic Asian architecture as the Ninja Squad buzzed with excitement. It wasn’t long before the Ninja Master himself, Datsik, took the stage in his LED Kasa hat, red ninja garb, and proceeded to unleash banger after banger. Sprinkling in his newest songs from his also released on Friday, Datsik’s set was complete with an incredible laser show. Head-banging commenced, moshing ensued and the whole place glowed with good vibes. Filthy, grimy drops and clips hip-hop took over our ears. We raged as rave ninjas do and thanked Datsik for blessing our spirits. This was just the start a 55-date tour across North America. For a list tour dates and locations, please visit .

Photo Credit: Nicole Graham Make sure to visit our Facebook page to see !